From the Pagoda: 2019 USAC Karting Battle at the Brickyard 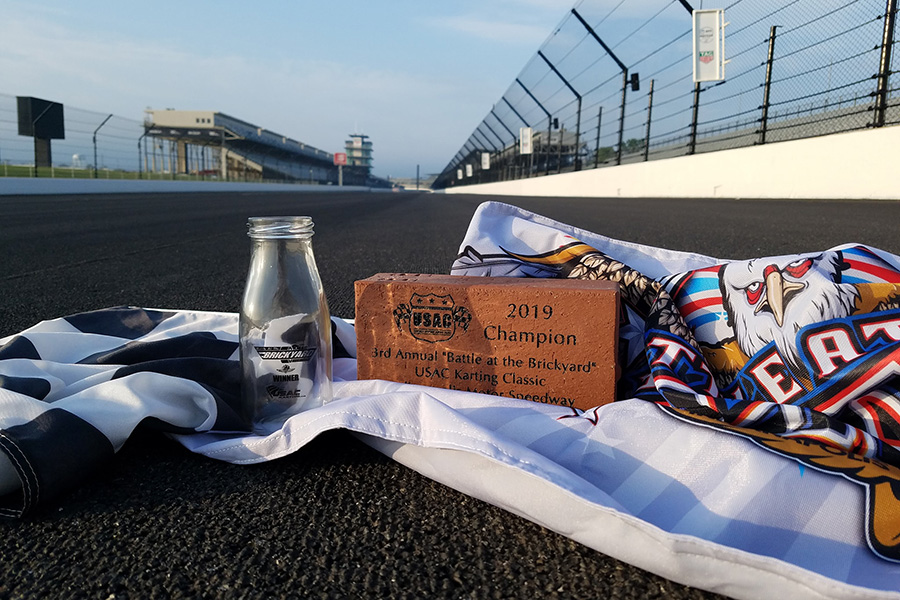 Here at eKartingNews, we have turned a great deal of attention toward our EKN Radio Network and the podcasts we continue to be produce weekly. The focus on EKN Radio has certainly taken away time to write more columns, as I had been doing prior to the launch of the only 24 hour / 7 days a week / 365 days karting radio station in the world. The radio side of my workload has been fun, and has allowed me to expand my spoken vocabulary, however, I’m still a novice compared to the Pro that is Rob Howden. At least I can drive a kart faster then him. More on that in a later column. I felt it was time to do a ‘From the Pagoda’. Similar to my ‘From the Tower’, although the name has changed as the focus of this column is on the USAC Karting 2019 Battle at the Brickyard.

It has taken me some days to find the time in my busy schedule since returning back from the Brickyard to pen this column. I arrived late to the Indianapolis Motor Speedway on Thursday with the Fourth of July landing on move-in day. I spent the morning hours with my family attending a local parade, enjoying the festivities of celebrating the 243rd anniversary of the Declaration of Independence before making the four-hour trip south to Speedway, Indiana.

My tardiness to the Brickyard was followed by a chaotic week after the event inside the Indianapolis Motor Speedway, beginning with me losing my GoPro camera after leaving the facility. Imagine driving four hours home, knowing you took the camera off the kart, and not remembering where it was, especially with it holding all the footage captured on the weekend. It took me three days to empty out my Bell Racing bag for a 20th time before I realized I had stuffed the camera in my racing shoe before packing up under the Comet Kart Sales tent. With the relief of finding the camera, I was able to sit back and digest all the footage and memories I made in my first time competing at USAC Karting Battle at the Brickyard.

And it begins with USAC Karting and Mike Burrell being able to bring together this unique event. WKA has its Daytona KartWeek, SKUSA has the SuperNationals, and USAC has the Brickyard. For years, karters have been dreaming of racing inside the hallowed grounds of IMS. The renovation and construction of an infield road course, opening in 2000 with Formula One taking to IMS, made those dreams even brighter, with hopes of karting getting a chance to cross the famed ‘yard of bricks’. Year after year, more events were added to the event schedule at the track that occupies the corner of 16th Street and Georgetown Road. At the end of 2016, Indianapolis Motor Speedway and USAC announced the first major karting competition to ever take place at IMS would come in July 2017. And hopefully, we will have our foot in the door for the long-term future. 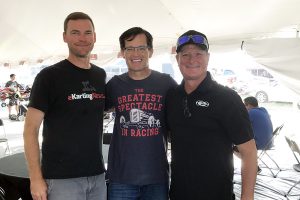 Following the momentum of the inaugural event, USAC added a new element thanks to those at the Indianapolis Motor Speedway – ‘The Lap’ – a slow pace lap around the full 2.5-mile oval and crossing the famed yard of bricks at the start / finish line. I was able to attend the 2018 edition as a spectator, alongside my dad, who was racing in TaG Masters. An engine issue late in the day on Friday eliminated him from taking part in The Lap, and me missing it completely as I hauled the engine over to Comet Kart Sales to be repaired so that he could continue competing for the remainder of the weekend. ‘The Lap’ returned this year, with my dad getting his chance to cross the bricks after karting for 45 years. I was able to take part alongside EKN Publisher Rob Howden, aboard our matching Comet Eagle machines. We crossed the yard of bricks together, and enjoyed taking the full 2.5-mile run, getting to experience – at 40mph – what it is like driving around the Indianapolis Motor Speedway.

‘The Lap’ was made possible thanks in part to the support of karting at IMS by President Doug Boles. The Indiana native has become a rock star around Speedway, Indiana and the Indianapolis area, if not the entire state. His enthusiasm for not only IMS, but racing in general, has brought new life to famed Brickyard. Howden and I had the chance to speak with Mr. Boles on Friday morning in the Margay tent, as his son Carter was competing in his second Battle at the Brickyard in the Ignite Senior class. It is his understanding of opening the doors to IMS to other events outside IndyCar and NASCAR that will fuel the flame for young and old becoming lifelong motorsports fans and competitors, and passing that love to future generations as the Indianapolis Motor Speedway has done for over 100 years.

It takes more than just one or two people to put on an event such as this. Burrell has been able to pull together a dedicated and experienced staff for USAC Karting to host the Battle at the Brickyard. Leading the way was race director Rick Fulks. A veteran driver, Fulks has taken on the role as the point man during race weekend for USAC Karting. When the heavy storm rolled through Saturday before reaching the midway point of the categories, he and his staff put together a schedule on Sunday to give every class that missed the Prefinal a quick five-lap dash and still able to provide a full 14-lap main event for all the categories. Kudos to Rick and the entire USAC Karting staff for all they did leading up to the weekend and putting in the 14-hour days in the Indiana heat. 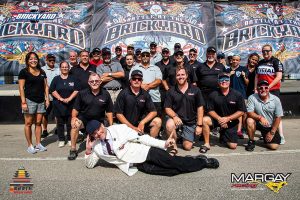 One USAC Karting official that has stood out since the inaugural event is Chief Starter Jason Burgess. The charismatic flagman brings full professionalism with an homage to previous USAC starters with his attire and a dash of fun, including his witty phrases on the chalkboard at start/finish line. It is his positive attitude we need in our sport, because after all, karting is a hobby for 99% of us behind the wheel.

While the majority of the event went off without issues, there were a few things that stood out to me as a competitor. The major issue throughout Friday was the scales. For some reason, the last two years at the Brickyard has seen the scale line become the focal point of frustrations. Not between other drivers, but with competitors getting their kart on the scale properly and the scales to weigh the driver/kart correctly. While USAC did not provide an extensive reason for the issues, they opted to move to scales provided by Margay Racing for the remainder of the weekend beginning on Saturday morning.

My suggestion for future Brickyard events, with such large fields and a tight daily schedule, secure two sets of ‘working’ scales. Rent from other clubs in the area, and establish one set of scales for the odd number classes, and one set of scales for even number of classes. This may require one worker for each set, however, this will allow for a smoother Friday and thus provide a backup system should one set go down with an issue. 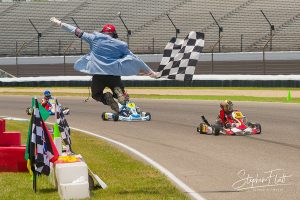 Jason Burgess doing his thing for the final checkered flag of the 2019 Battle at the Brickyard (Photo: Stephen Flatt)

Another point about the scale line and system was the lack of policing. Crew members and families were able to interact with drivers after coming off the track following official sessions. Typically, drivers are to be sectioned off from anyone other than officials when coming off the track before crossing the scales to eliminate any tampering. I think more fencing is needed in this department to help keep competitors on the fair side and not create any perceptions of people cheating in the minimum weight department.

The next area is on-track officiating with bump drafting while qualifying. Throughout the weekend, competitors were bump drafting, especially in the lower horsepower categories, including the Briggs 206 divisions. While I understand the reasoning and the safety aspect, bump drafting was done all weekend with the exception of that session. My main concern is the definition of bump drafting. Can I hit a driver if he screws up the hairpin, to help him get going? If I’m getting hit from behind and hit the guy in front of me, is that considered bump drafting and deemed a disqualification? It is too big of a gray area, in my opinion, and one of the reasons why many of the major organizations dropped that rule for qualifying. I hope USAC takes a look at it for the 2020 event.

The quickest category of the event was the KZ division. Last year, Stock Honda was the largest contingent of the shifterkart groups, while the majority of the racers moved over to KZ for 2019. A handful of the drivers utilized the new IAME SSE 175cc powerplant, which USAC Karting allowed into the KZ division. For those who are not familiar, KZ is a 125cc version of a karting-specific engine. That is a 50cc difference in engine size, however, a little more work can be done to a KZ with a more strict set of guidelines for engine work on an IAME SSE. It was interesting to see how the two different engines performed, with a handful of drivers moving over to the 175cc by the end of the weekend. One KZ stood out, and that was with Rock Island Grand Prix winner Rory van der Steur, until a mechanical issue forced him to switch over. This will be something to watch as shifterkart racing continues to evolve into a new era with the Stock Moto package no longer holding its position as the king of US sprint karting. 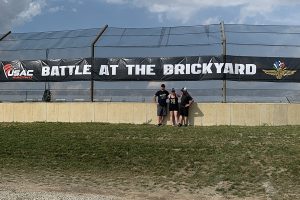 Can’t wait for the EKN crew to return back for the 2020 Battle at the Brickyard (Photo: EKN)

For me, racing at the Indianapolis Motor Speedway was a great bucket list track to check off. I’ve raced at Mid-Ohio, Daytona, and Road America, all before I was 20, and they remain high on the list of places I’ve raced. While we aren’t racing around the actually 2.5-mile oval, The Lap was enough and just racing inside the hallowed grounds of IMS made for a thrilling three days. I’m not sure if it was the fireworks blasting off all weekend around our AirBnB just north of IMS that kept me from sleeping or just knowing each morning we would be strapping on the helmet and race inside the Brickyard. I can say it ranks up there with one of my greatest weekends in the sport. It was very cool to see a number of IndyCar, Road to Indy and other drivers and crew members from other forms of motorsports catching the action and taking part as well – including Connor Daly and Gabby Chaves with Margay Ignite.

The weekend would not have been possible without the help of Comet Kart Sales. They welcomed Rob and I with open arms, and expected the best out of a couple guys who really hadn’t went wheel-to-wheel in a couple of years. I’ll have more on the weekend aboard their Comet Eagle chassis and Comet Racing Engines Briggs 206 power in our OnTrack report in the coming days. For now, it will be a long 12 months waiting for the 2020 USAC Karting Battle at the Brickyard.