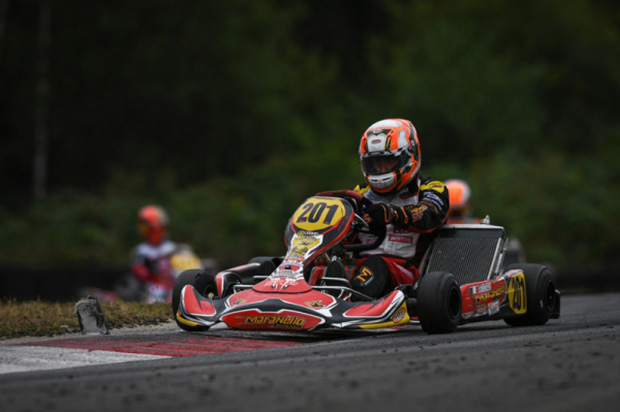 Federer claimed the pole position and the podium of the two finals ending twice in the fifth place at the third round of DKM in Kerpen. The young German Trefilovs won the KZ2 Cup’s Final and is currently third in the standings.

A double podium for Fabian Federer in KZ2 and a solid win for the young promise Davids Trefilovs in KZ2 Cup are the haul of Maranello Kart and SRP Racing Team in the third round of DKM in Kerpen.

In KZ2 Fabian Federer has been among the main protagonists of this appointment in Germany. The Italian driver on Maranello-Tm run by team SRP has been very fast since qualifying practice where he managed to claim an excellent pole position. Combative and focused also in the heats,  Federer took P3 before ending both finals on the 5-way podium of DKM. Federer had actually ended second in race2, but his front fairing was found misplaced following a contact at the start and therefore he was handed a penalty. This relegated Federer to P5 at the end of a great comeback from P10 to second! Federer is currently second in the classification being 21 points shy of Stan Pex, who won both finals in Kerpen.

Team SRP-Maranello Kart’s result in Kerpen was completed by the great outing of the young Davids Trefilovs, who dominated KZ2 Cup after bouncing back from P5 in qualifying Group2 and P4 of the heats. Trefilovs won the Prefinal and the Final completing another strong run. Trefilovs installed himself in P3 of the standings with these results. Dennis Fetzer also run a strong race in KZ2 Cup and ended sixth. Brio Hueting was 12th, while Andreas Dresen had to retire early.

In OK-Junior, David Jaromin has been the fastest of Maranello Kart-SRP drivers ending 16th in the first final after a promising 10th place in the heats, while Paul Rieberer (Hold Maranello) was 24th. Rieberer bounced back in the second final and climbed the classification up to P15, while Jaromin had to retire one lap early. Jannik Julius-Bernhart could not qualify for the final due to the retirement from one heat.

The next round of DKM will take place next August 4th in Genk (Belgium).