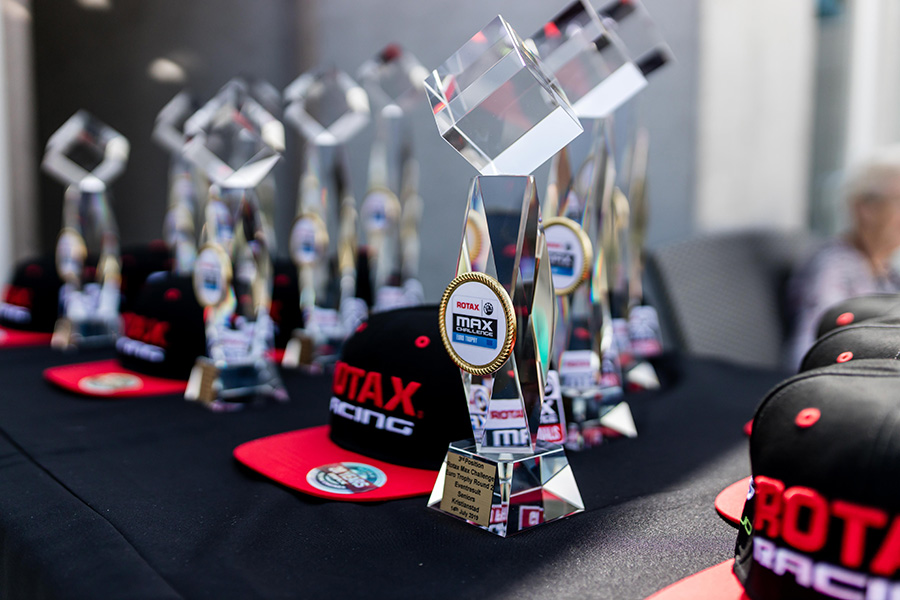 In the middle of the summer month of July (12th – 14th) the Rotax MAX Challenge Euro Trophy headed northwards. Six weeks after the outstanding season kick-off at the Italian Adria International Karting Raceway, the Asum-Ring in Kristianstad, Sweden, was the next top race track in the calendar of Europe’s professional RMC karting series. 85 drivers from around 20 nations made their journey to Scandinavia to compete in the 2019 mid-season event on the 1,234 metre circuit. The spectators on site, as well as the fans watching the live stream, witnessed some thrilling battles throughout the weekend program, at the end of which some new faces were added to the European Rotax winners’ list while the first champion was crowned as well.

Oli Pylka (Dan Holland Racing) was the most dominant youngster in qualifying. The Polish driver set the fastest lap on a wet track and started from pole position into the heat races. Here, the FA pilot lost ground and dropped back to fifth place, while local hero Wilgot Edqvist (Strawberry Racing) moved up the order to the front of the grid. On home soil, the Swede showed a thrilling performance on Sunday with a terrific fight with opening round winner Mike van Vugt (JJ Racing) and Oli Pylka. Eventually, it was Edqvist who savoured the victory by a narrow gap of less than half a second at the flag.

The second major race was not lacking any excitement, either, seeing Wilgot Edqvist, Mike van Vugt and Oli Pylka setting the pace again. This time Pylka asserted himself in front and was the first to cross the finish line. However, the Pole received a bumper penalty and an additional time penalty for driving standards, which dropped him back to twelfth place, handing the win to Wilgot Edqvist. He also took the day’s victory ahead of Mike van Vugt and Dutch teammate Lucas Schoenmakers (JJ Racing) in third place.

Ilian Bruynseels (Bouvin Power) proved his skills on the wet track of the qualifying on Friday with the fastest lap. He was also victorious in one of the heats, but had to cancel one race, too, throwing him down the order. Consequently he was not able to play an important role on the final day. Meanwhile Charlie Turner (FA) took the lead after the heats and secured pole position for the first final. Yet the Brit was not able to convert his promising momentum into a countable result.

In the first main race, championship leader Mathilda Olsson (Strawberry Racing) took the reins. Starting from seventh position, she fought hard and overtook one opponent after the other. At the end of the 17 lap race, the Swede collected her third victory in a row. And this is not the end of the story: Even in the second final, Olsson was the benchmark. In an early stage of the race, she was able to head away from the grid and seemed to be able to manage her lead up to the chequered flag. But it was Axel Saarniala (Kohtala Sports) who put a spoke in Olsson’s wheel. The Finn literally flew around the track and closed the gap. Ultimately Saarniala seized his chance in the very last corner successfully and snatched the win. Nevertheless, Olsson claimed the day’s overall win after collecting the most points of the weekend, while Axel Saarniala and Hunter Rhys (Dan Holland Racing) completed the podium. Equally, Olsson had another reason to celebrate. After her home race, she leads the championship and is uncatchable for the tite, thus being both the first champion of the year and Rotax Grand Finals ticket winner too.

After the Finn Ville Viiliainen (Tony Kart) set the pace in qualifying, Xander Przybylak (Bouvin Power) replaced him after the heats, taking over the lead of the pack. From then on, the Belgian seemed to be unbeatable, which he proved by a dominant show in the first final winning by a gap of almost six seconds. But the setback followed soon, right after the start of the second race, when the favourite retired with a technical issue and had to bury all chances for the day’s victory. In the meantime Petr Bezel (KSCA Sodi Austria Team) seized his chance. The Czech took the victory ahead of Sweden’s David Rehme (Dan Holland Racing), which also matched the result of the day’s standings. Here Ville Viiliaeinen climbed on the podium in third place.

The classification of the DD2 Masters pilots was a clear case, in which the Belgian Christophe Adams (Team La Putrel) won both races ahead of Austria’s Roberto Pesevski (KSCA Sodi Austria Team) and Poland’s Slawomir Muranski (46 team).

The Rotax MAX Challenge Euro Trophy is now looking forward to the grand finale, which – as in the previous year – will be held in Germany: From 6th to 8th September 2019, the Prokart Raceland Wackersdorf will not only ascertain the remaining 2019 champions, but also award a total of another six tickets to the Rotax MAX Challenge Grand Finals in Sarno (IT) to the best-placed participants. Since drop results will have their final effect on the championship standings at the big showdown, one can expect a real tough battle for the crowns.