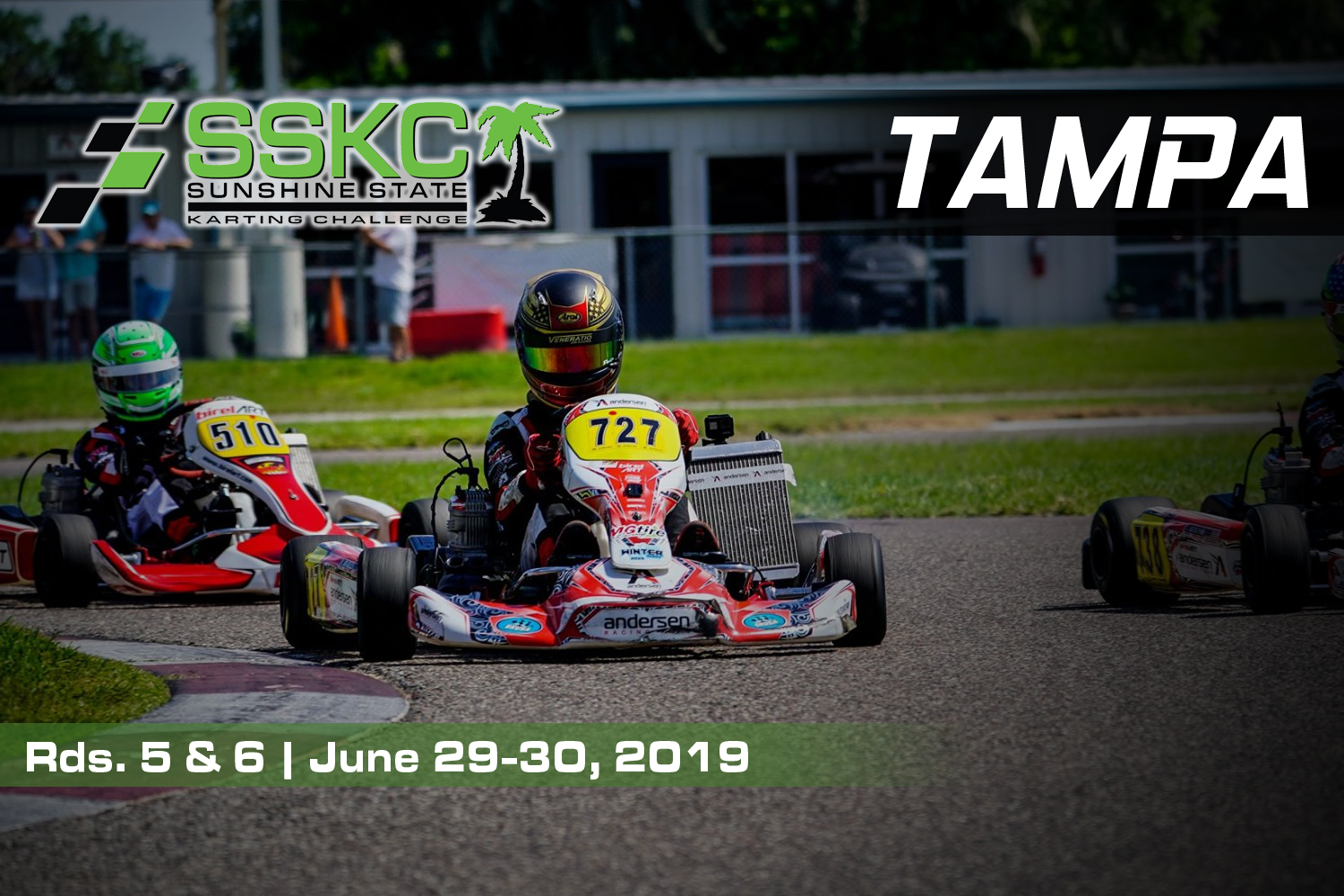 The month of June in Florida is known for both bringing the summer heat and summer downpours. At Andersen RacePark for the 5th and 6th rounds of the 2019 SSKC season, racers got a fair share of each. Saturday was mostly dry up until a series of scattered storms moved through, but after a short delay, the main events were held on a drying racetrack.

Sunday saw a picture perfect day from start-to-finish. A huge increase in overall turnout from 53 entries in 2018 to 83 entries in 2019 highlighted the event, with nearly every division picking up 30-50% in total drivers.

Championship leader Enzo Vidmontiene (Benik) came into Tampa looking to back up his dominating performance in Homestead. He started Round 5 off doing just that, as he took the pole award in qualifying. A four-way battle for the lead in the Pre Final turned into chaos late in the going, as championship contenders Kai Johnson (Energy / AKT) and Oliver Wheldon (Kosmic / JC Karting) came together in the final corner. Vidmontiene held onto take the top spot in the dry session, and when the rain came for the main event, he gapped the field by more than ten seconds. Carson Weinberg (Nitro) finished second, while Johnson and Wheldon ended third and fourth after starting at the tail end of the field.

Sunday brought the sun back out and kept the track dry, but Vidmontiene did his homework overnight. The Miami-based driver led every lap of competition in Round 6, taking his fifth consecutive win on the season. Kai Johnson took the next step on the box in second, and after a spin in the Pre Final, Carson Weinberg rebounded to third.

The third weekend on the Sunshine State Karting Challenge saw eKartingNews.com Shifterkart Driver Rankings #1 AJ Myers (CRG) join in on the Shifter division. Myers obliterated the field on Saturday, putting in lap times that were nearly a second a lap faster than the next best driver. Zachary Hollingshead (TB Kart / OGP) ran second on both days, closing the gap significantly by the end of the weekend. Michael McCarthy (BirelART / Andersen) podiumed with a third place finish on Saturday, but a DNF on Sunday allowed Baylor Griffin (CRG / URace) to get onto the box.

Kyffin Simpson (Tony Kart / Speed Concepts) had a fair share of mechanical woes in his KA100 Junior entry this weekend. Some engines issues hampered his pace throughout the day on Saturday, but he powered through the adversity to still come out on top with a win over rookie Beckham Jacir (Kosmic / JC Karting) and EJ Tamayo (Praga / JP Star).

On Sunday, Simpson led every lap up until the last, when a surprise mechanical failure handed the lead over to Tamayo. Tamayo went on to score the upset victory, his first in the division. Jacir ended P2 just under a second behind.

Three drivers headlined the Briggs Senior class on the weekend: championship leader Colin Warren (VLR / TS Racing), his challenger from Homestead in Dylan Amundsen (MGM), and Andersen local driver Jed Perkins (Margay). However, once the storms rolled in on Saturday, the experience of Warren shined through as he pulled out a 5+ second victory over Perkins. Amundsen gambled on slicks, but the bet didn’t pay off and he failed to complete more than a lap. This Zach Holden to avoid the wet and wild action in front of him to get a solid third place finish, backing up a solid run in 2018.

On Sunday, veteran driver Phil Pignataro joined the battle up front. Warren still seemed to have a slight edge on the competition after the Pre Final, and in the Final, he once again was able to break the draft window back to Perkins to score his sixth straight victory in as many starts. Perkins pulled an even bigger gap back to Pignataro who wound up on the podium after avoiding some shuffling on the opening lap.

The Briggs Heavy class ran as one of the last classes in the lineup in Andersen, giving them a mostly dry track for their main event on Saturday. The day began with hometown racer James Perkins (Margay) taking fast time honors in qualifying. In the Pre Final, it was Jorge Ruiz (TB Kart) who fought his way to the front, beating Perkins, Chad Dokken (TB Kart), and Neil Breitenbach (MGM) to the stripe in a spectacular battle. Unfortunately, the a mistake early in the Final took Ruiz out of the running. Perkins capitalized to take the lead, and he never waivered under the pressure of Ruiz’s teammate in Chad Dokken who placed second. Breitenbach finished third, adding to his podium total.

Sunday was a fresh start for the quartet, as Dokken got the edge in qualifying over Breitenbach and Ruiz. A good start for the inside lane gave Dokken and Ruiz the top two spots early, and they worked together perfectly to set up an all-TB-green front row for the Final. Although, a rough start to the main event took Ruiz out of the hunt, leaving Dokken to fend for himself out in the lead. Breitenbach traded the top spot with Dokken a handful of times, but at the stripe, Chad Dokken was able to win over the local track champ. Perkins watched the battle closely from third, but he was just too far back to challenge the top two by the end.

Max Garcia (Kart Republic / KartSport NA) had a breakout weekend in the Mini division last year. The ten year old from Coconut Grove went head-to-head with X30 Junior driver Nikita Johnson, nearly coming away with his first career SSKC victory. Garcia returned to Tampa Bay with the same fire burning inside, and he let it show throughout the day on Saturday. Garcia qualified on pole, won the battle in the Pre Final against Jorge Ortiz (Tony Kart / Ortiz Racing Team) and Michael Costello (Benik), and was absolutely stellar in the rain. He pulled a near 7-second margin of victory over Nitro Kart’s Cameron Weinberg (Nitro). Sebastian Wheldon (Kosmic / JC Karting) joined the pair on the podium after Jorge Ortiz suffered an engine failure with a handful of laps remaining.

Round 6 saw the field catch up the previously unmatched pace of Garcia. Wheldon took top honors in qualifying, with Weinberg one hundredth back in second, Garcia third, Costello fourth, and rookie Xander Reed (Tony Kart / Ortiz Racing Team) placing fifth just one tenth back. In the Pre Final, Garcia fought his way to the front as he, Weinberg, and Costello all traded the lead.

Ultimately, Garcia took the Pre Final win, but the field regrouped for the Final. The all-out assault began on Lap 1, as Weinberg went on the defensive early. Garcia made quick work of the Nitro driver, but the battles didn’t stop there. Anderson Leonard (Haase) began moving forward before a crash knocked him out of the top three. From there, it became a slugfest between Ortiz, Costello and Garcia. Costello led coming to the white flag, but a crossover move initiated by Garcia brought the train of Ortiz and Wheldon on by exiting Turn 1. Garcia would go on to score the win, with Ortiz rebounding from Saturday to second and Wheldon getting his first podium of the year in third.

Alex Speed (Tony Kart / Speed Concepts) was one of the most highly-regarded karting drivers in the late 90s and early to mid 2000s. However, he since then has taken up the role as driver coach, first under Ocala Gran Prix before moving over to his father Mike’s team in 2017. This weekend, he was coaxed to get back into the seat once again, in a similar fashion to his return at the end of the 2018 SSKC season. Speed was relatively unmatched on Saturday, showing that he very much still “has it” by outrunning top-level Florida talent in the likes of Axel Cabrera (FA Kart / AKT) and Colin Warren (TB Kart).

By Sunday, Brandon Simeone (Kart Republic) had added his name to the mix of drivers chasing Speed along with Fullerton driver Nick Andries (Fullerton). However, in the Pre Final, Cabrera worked his way through the grid after a decent qualifying effort to line up second for the Final. As the Final got underway, Cabrera turned the aggression to a 10 by getting a little extra physical with Speed in the opening laps. After Alex got a little bit of separation, though, it was all over. Cabrera held on to finish second for the second straight day with Brandon Simeone getting by Colin Warren to take the final podium spot.

While last year at Andersen RacePark was a great weekend in Mini for Max Garcia, it was an even better one for AKT Racing Team’s Nikita Johnson (FA Kart / AKT). The X30 Junior rookie struck first in qualifying and then backed that run up with a win in the Pre Final. For the rain-soaked main event, Johnson rose to the occasion for the third time on the day, pulling a decent lead early and maintaining that through to the finish. Brent Crews (FA Kart / KartSport NA) finished second, while championship contender Kyffin Simpson (Tony Kart / Speed Concepts) rounded off the top 3 in third.

Sunday saw Simpson jump to the top of the scoreboard in qualifying, bringing his Speed Concepts teammate in Nathaniel Cicero along with him to third. Nikita Johnson backed up his first career SSKC Junior win on Saturday with an outside front row qualifying run, with Brent Crews and Lucas Rodriguez (Kart Republic / KartSport NA) completing the Top 5.

Crews quickly worked his way to the lead in the Pre Final, but Kyffin Simpson remained close throughout its entirety. With three laps to go, Simpson pulled the trigger and went on to win the heat race, with Crews holding back Johnson for second. In the Final, the pair got away from the field early and set up for a duel in the closing laps. In the end, it was Crews coming out on top by just over a tenth of second on Simpson. Championship leader Jeremy Fletcher (Tony Kart / Zanella Racing) worked his way up to third by the end of the Final after having to start at the tail end of the grid due to a crash in the heat race. Johnson finished fourth while Rodriguez held back Michael Mallardi (BirelART / Andersen) to finish in fifth.

For more information on the Sunshine State Karting Challenge or the tracks and partners involved with Florida’s premier regional championship, visit http://sskckarting.com/