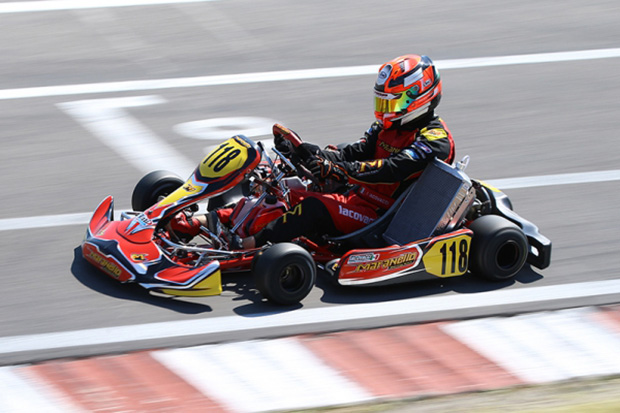 Iacovacci claimed a great P4 in KZ2’s race-1, but an incident in race-2 slowed his title quest down and now he is third at only 27 points from the leader. Great double win for Trefilovs and SRP Racing Team in KZ2 at the Adac Kart Masters in Oschersleben.

Maranello Kart lived a bitter-sweet racing weekend in Sarno at the third round of the Italian ACI Karting Championship. Francesco Iacovacci has always been among the quickest at the International Circuit Napoli over the weekend.

Following a promising third place at the end of heats, the Maranello Kart’s driver turned out to be particularly fast in the first of the two finals in Sarno taking a positive P4 ending just 0.5s shy of the podium. Iacovacci managed to secure important points for the championship in race-1 and this confirmed him in the second place of the provisional standings, making up some points on classification leader Cunati who had to retire instead. Things did not go as well for Iacovacci in race-2, as he was involved in an incident early on. His retirement was a pity as he could have installed himself on top of the classification at the end of the weekend. The classification is nevertheless quite compact and the missed result of Cunati in race-2 kept the title fight open with Iacovacci third at 27 points from the lead versus the 54 before the weekend in Sarno.

A good result in KZ2 was also obtained by Gabrio Bizzozero, who was 16th in race-1 but managed to recover well up to P8 displaying a good growth. In KZN Under, Michael Dalle Stelle had to retire from race-1 before coming 25th in race-2. Leonardo Pelosi was 13th in race-1 and 15th in race-2.

Cristian Griggio had a tough race in KZN Over. After the problems in the heats he managed to recover up to P15 in race-1, but had to retire early on from race-2. The best of Maranello Kart in this category were Andrea Fortuna who was 11th in race-1 and Sebastiano Matteo, 8th in race-2. In X30 Junior Alessio Migliucci was 24th in race-1 and 21st in race-2, while the young Simone Frasca could not qualify for the finals in 60 Mini despite showing a good progress.

The next round of the Italian ACI Karting Championship is scheduled for July 28th at the Adria Karting Raceway.

In the third round of Adac Kart Masters run in the same weekend in Oschersleben, David Trefilovs and SRP Racing Team claimed an excellent double win in KZ2. A great performance was also put in by Jannick Federer in OK-Junior as he came fifth in race-1 and seventh in race-2, while Jannik Julius-Bernhart was ninth in race-1 and sixth in race-2.

SRP Racing Team’s result in Oschersleben is very positive ahead of the DKM German Championship in Kerpen on July 14th.