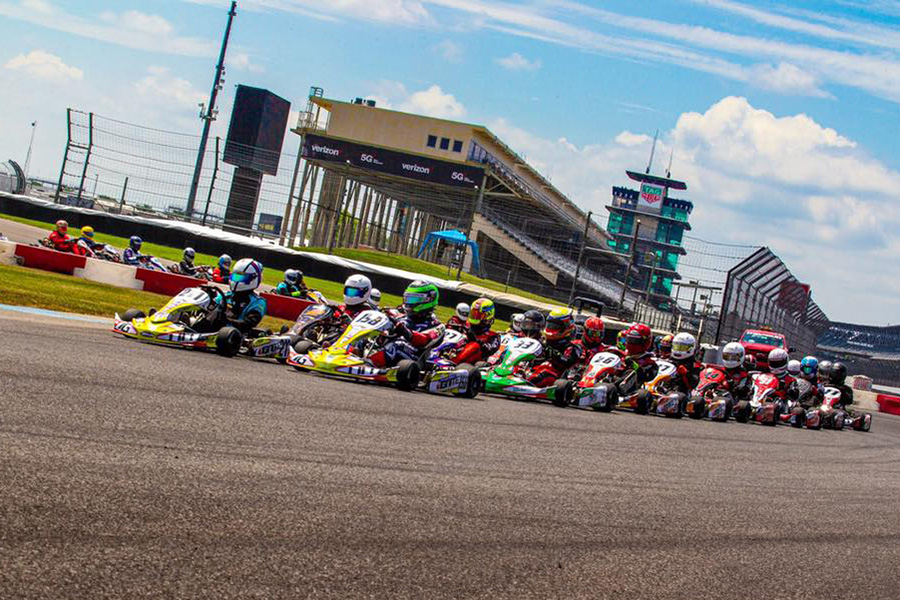 The third edition of the USAC Karting Battle at the Brickyard was completed over the Independence Day weekend inside the famed Indianapolis Motor Speedway. The Racing Capital of the World welcomed a record 454 competing entries in the 17 categories that took to the 1-mile course. The layout used portions of the track’s Formula One and Indy GP circuits, in addition to a pair of access roads, including Hulman Boulevard. The weather was extreme throughout weekend, as the heat index inched close to triple digits while a heavy thunderstorm rolled through on Saturday afternoon.

Action began on Friday, July 5 with three rounds of practice before qualifying set the fields for the heat races scheduled for Saturday morning. All the eight-lap heat races were completed, in addition to five of the 10-lap Prefinals, before the heavy rains came. Lightning in the area halted the action before the rain arrive, and then a ‘lake’ that formed in turns 9-10 section of the USAC course due to the heavy amounts of rain moved eight of the 13 Prefinals to Saturday morning. The distance of these Prefinals was shortened to five laps, with the revised Sunday schedule still providing the 14-lap main events to go full distance. 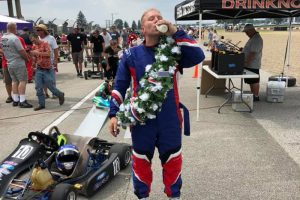 Winning a main event on Sunday meant the Indy tradition of wearing the winner’s wreath, drinking milk, and receiving the USAC Karting ‘Brick’ trophy. One driver left the weekend with two Bricks, as Gary Lawson defended his two-win performance in 2018 in the Briggs 206 Medium and Heavy divisions. The Rock Island Grand Prix Emperor with 25 wins at the famed street race notched his third and fourth victories at the Brickyard with two solid sweeps. Lawson (Comet Eagle) was the first to taste the milk as Briggs 206 Medium was the first on the Sunday schedule. He and Steven Kilsdonk (MGM) were able to break away with Lawson leading the entire distance for the victory. Eric Fagan (Ricciardo) completed the podium with Colin Warren (VLR) and Blake Korth (Birel ART) rounding out the top-five. Briggs 206 Heavy was the same, with Lawson and Kilsdonk going 1-2. Alex Keadle (MGM) won the battle for third ahead of Corey Towles (Comet Eagle) and Korth.

Kilsdonk was able to get a Brick of his own, sweeping the Briggs 206 Masters class on the weekend. Up until the Final, Kilsdonk held the P1 position all the way through. Michael Welsh (MGM) challenged and led during the 14-lap main event, but came up short at the checkered flag with Kilsdonk reaching the line ahead to earn his first Brick trophy. Eric Maitlen gave MGM a sweep of the podium with last year’s winner Steve Knight (Comet Eagle) was fourth with two-time Brickyard winner Jeff Dolian (Margay) in fifth. 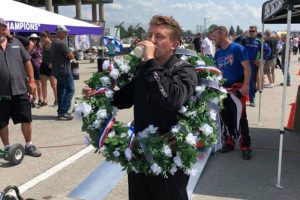 Like Kilsdonk, Welsh was able to get his own Brick, scoring the victory in Yamaha Masters. A three-driver lead pack formed with qualifying and Prefinal winner David Galowina (Tony Kart) and heat winner Michael Dittmer. Galowina led at the white flag, but it was Welsh leading at the checkered flag with Dittmer on his bumper. Galowina settled for third with ‘Pistol’ Pete Vetter (Margay) in fourth and Jason Thomas in fifth. 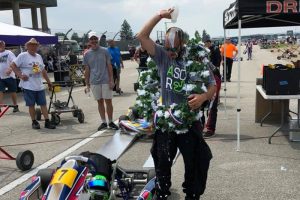 It was an emotional victory for Brandon Adkins in Yamaha Senior (Photo: USAC Karting)

Adam Maxwell kept the Top Kart streak going for the Yamaha Junior division, sweeping the event. Maxwell was challenged all weekend by Elysiah Navarro (FA Kart), as the two swapped the lead numerous times in the main event alone. At the line, Maxwell scored his first Brick trophy by 83 thousandths of a second. Timothy Steele (Top Kart) completed the podium, beating out Elliot Cox (CRG) and Ayrton Houk (FA Kart).

There were four Junior categories at this year’s Battle at the Brickyard in total. Briggs 206 Junior was the highest at 27 entries, which bodes well for grassroots racing long term. Sam Corry (MGM) came away with the victory. James Overbeck (Tony Kart) set fast time and won the heat race, but contact at the start of the Prefinal dropped him down the order. Corry took over and won the race to lead the field to the green flag in the main event, and then paced the field all 14 laps for the victory. Collin Miller (MGM) and Will Holtz (Ionic Edge) joined him on the podium with Alex Stanfield (Tony Kart) fourth and Carter Pryor (Margay) fifth. 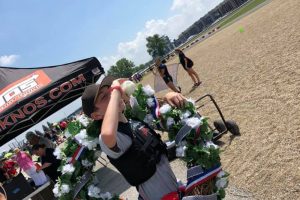 Margay Ignite Junior was the first of two new Junior classes, welcoming Reid Sweeney to the list of Battle at the Brickyard winners. Sweeney swept the action after qualifying, where Kayla Carlson took top honors. Sweeney won the heat and Prefinal before holding off Trevor Eggemeyer for the victory. Carlson ended up on the podium in third with Tanner Tecco and Will Loller completing the top-five.

KA100 Junior made its debut at the Brickyard, welcoming 14 drivers. Adam Maxwell (Top Kart) set the pace early, posting fast time in qualifying and winning the heat race. Sam Corry (Tony Kart) edged him out for the win in the Prefinal, setting up for a great battle in the main event. Five lead changes alone at the start/finish line in the 14-lap race with a large lead group hungry to become the inaugural winner in the class. Contact in the final lap involving both Corry and Joshua Carlson (Kosmic) took them out of the top-two positions, allowing Alex Stanfield (Tony Kart) to reach the line first for the victory. Camden Gruber (MGM) was only 39 thousandths off at the checkered flag to finish second with Collin Miller (MGM) in third. Maxwell ended up fourth with Corry down to fifth. 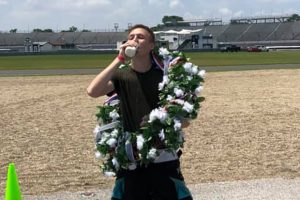 Nearly 100 of the event’s entries were found in the three Margay Ignite categories in attendance, with a large majority of them housed in the massive tent at the north end of the paddock. The largest of them was the Margay Ignite Senior class, welcoming 53 drivers to the green flag on Sunday, including two IndyCar drivers in Gabby Chaves and Connor Daly, along with two past winners in Charlotte Lalonde and Jeff Dolian. The weekend ended as it began with Florida driver Colin Warren at the top of the time sheets. Warren set fast time in qualifying with Daly posting the second fastest lap, steering what was a display kart earlier in the morning. Chaves struck in the heat race, winning the eight-lap sprint ahead of former Rock Island Grand Prix winner Jordan Bernloehr in second. The short five-lap Prefinal on Sunday was Bernloehr’s as Chaves ended up second. Warren found himself starting the main event in ninth position. Warren was able to work his way forward quickly into third and on the bumpers of Bernloehr and double Dash at Daytona winner Evan Stamer. Everything boiled down to a last lap battle with Warren coming out as the victor. Stamer remained in second with Bernloehr dropping to third. Justin Vancil and Daly completed the top-five.

Things were as competitive in the 30-driver Margay Ignite Masters field. ‘Pistol’ Pete Vetter set fast time in qualifying while last year’s winner Jeff Dolian won the heat race. Nick Todtenhaupt arrived after qualifying on Friday, and advanced his way from last in the heat race, to finish first in the Prefinal. He led the field to the green flag with Keith Sharf and a charging Michael Burton to form the lead pack. Burton led the majority of the race, including the run to the white flag. Both Scharf and Todtenhaupt were able to work past him on the final circuit, with Scharf getting the edge at the line by 61 thousandths for his first Brick trophy. Burton settled for third with Colin Predith winning the fight for fourth over Vetter and EKN’s own Rob Howden. 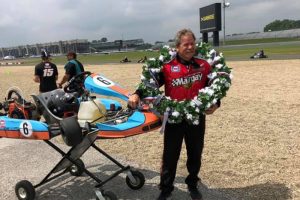 The quickest category of the weekend was the KZ division, with a mixture of engines making up the 24-kart field. RIGP King of the Streets winner Rory van der Steur (Tony Kart) set fast time in qualifying and won the heat race. An issue in warm-up to his Modena engine forced a change to an IAME SSE powerplant, and moved to the rear. This allowed Race Liberante (CompKart/IAME SSE) to jump up to the top spot for the Prefinal win. Liberante had issues of his own, seizing his primary engine that forced him to rent a Harden Motorsports Group IAME SSE engine. Liberante started from the back of the eight-lap heat race, and managed to climb up to fifth before winning the Prefinal. Grabbing the holeshot, Liberante led all 14 laps of the main event for the victory. Devon Smith-Harden (TB Kart/IAME SSE) was fast time in second, beating Evan Batt (TB Kart/IAME SSE) for a HMG sweep of the podium. Josh Lane (DR Kart) swapped out for an IAME SSE before the Final, coming from last to fourth with Kyle Kennedy (TB Kart/IAME SSE) completing the top-five.

Stephen Flatt (Praga) added his name to the list of repeat winners, claiming the victory again in Honda 125 Masters as he did in 2017. Flatt was able to sweep the weekend, grabbing the main event victory by 11 seconds ahead of Andrew Stevens and Chris Rock (Swiss Hutless). Jared Howerton scored the win in Honda 125 Senior. Cody Beck (TB Kart) had a sweep going until the opening lap of the Final when contact with a KZ Masters driver nearly sent him over on his head and out of the race. That allowed Howerton to score the victory over Iwan Davies and Jeremy Morales. 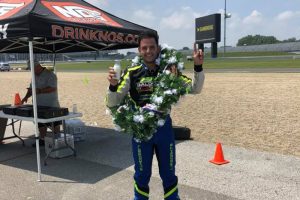 There was no clear cut favorite throughout the weekend in the IAME X30 Senior class. Ben Varner (Birel ART) set fast time in qualifying with Matthew Mockabee (Kart Republic) and Gavin Bayliff (Tony Kart) winning the heat races. With a lead change nearly every lap, the race went down to the wire with 13-year old Nicholas Terlecki (Merlin) edging out Varner for the victory by 41 thousandths of a second. Bayliff completed the podium with Finnegan Bayliff (Tony Kart) in fourth. Mockabee was a close fifth, recording fast lap of the race. 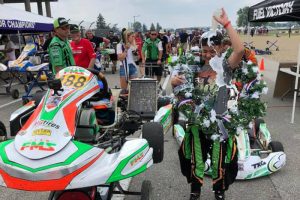 IAME Masters was a duel between Brian Fisher and Austin Queen, both making their first starts in the class. Fisher (DR Kart) led the majority of the race with Queen on his bumper for a thrilling last race of the event. In the end, Fisher held off Queen’s challenges to chug the last bottle of milk in victory. Chris Rock (Swiss Hutless) grabbed third with Ryan Spierowski (Fullerton) coming from 17th to fourth ahead of Jason Ewers (DR Kart).

Attention now turns to 2020, and the fourth running of the USAC Karting Battle at the Brickyard. It may be a little more than 365 days as NASCAR takes over the Fourth of July weekend for the Brickyard 400 next year. No date has been confirmed, however, the talk is two weeks later being the proposed weekend for the karting event. Before next year’s date can be locked in, USAC Karting will be busy preparing for their second of two events in 2019, the Elkhart Riverwalk Grand Prix through the city streets of the northern Indiana town on August 9-10, racing under the lights.