Palomba Great Protagonist of KZ2 at Italian Championship in Sarno 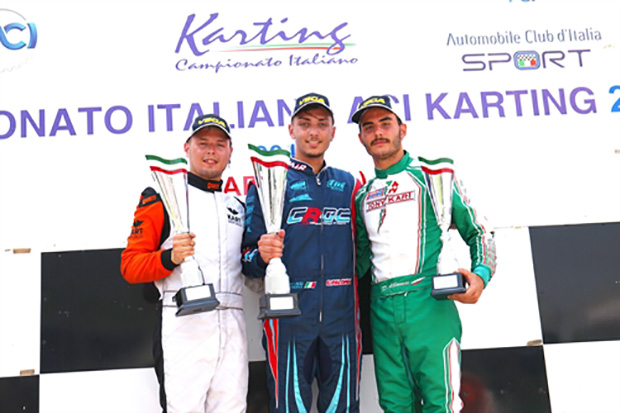 The Italian driver won Race1 and came second in Race2 closing in on Cunati that retained the lead of KZ2 but was quite unlucky in Sarno. The third round of the Italian Championship has made the campaign lively in all classifications.

Premises for a great spectacle in Sarno were all there ahead of the third round of the Italian ACI Karting Championship with 250 drivers contesting this event that has had several good, hard-fought races and made all the classifications of the Italian Championship quite lively.

KZ2. In KZ2 the weekend has been characterized by the competitiveness of Giuseppe Palomba (Croc-Tm), who has been a great interpreter of the home circuit starting from qualifying when he claimed the pole position and then won the heats before claiming a strong win in the Final. The Italian driver also put in a great comeback Race-2 and from the eighth place of the starting grid due to the top eight inversion ended again on the podium in P2 behind an excellent Leonardo Marseglia, who claimed his maiden win in the Italian KZ2 Championship. Classification leader Simone Cunati (CRG-Tm) had a tough weekend but kept the lead of the standings. Now his lead has been considerably reduced due to the retirement in Race-1 and P11 in Race-2.

Race-1’s podium was completed by Davide De Marco (KR-Tm) and Danilo Albanese (Tony Kart-Vortex), while the other protagonist of the Championship, Francesco Iacovacci (Maranello-Tm) was fourth. In Race-2, Davide De Marco was again on the podium, while Iacovacci had an incident early on.

60 MINI. The races of 60 Mini have been quite hard-fought as usual. The Jamaican Alex Powell (Energy-Tm) was back the victory in Race-1, but team Gamoto’s Manuel Scognamiglio (Tony Kart-Tm) had the most of it claiming P2 in Race-1 and taking an excellent win in Race-2 leading the French Jimmy Helias (Tony Kart-Vortex). The third place of both finals went to Flavio Olivieri (Parolin-Tm) who has also fought for the win.

KZN UNDER. In the second round for KZN, Alessio Mordini (Energy-Tm) has been the protagonist of Under taking the win in Race-1 and then recovering well in Race-2 up to P2 behind the winner Andrea Pastorino (BirelArt-Tm) and ahead of Emanuele Simonetti (Tony Kart-Tm) by just 0.032s. The podium of Race-2 was rounded off by the second place of Roberto Cesari (Top Kart-Tm) and the third of Edoardo Tolfo (Praga-Tm).

KZN OVER. The two finals of KZN Over have been very nice and Roberto Profico (Tony Kart-Tm) deserved a round of applause due to his win in Race-1 and an exceptional comeback in Race-2 where he claimed another win. These wins and that in Siena allow Profico to be quite optimist for the title heading into the closing race in Val Vibrata when the points scoring scheme will have a coefficient increased to 1.5. Riccardo Nalon (Parolin-Tm) was second in Race-1 and Marco Pagani (Parolin-Tm) third, while Race-2’s podium was completed by Riccardo Melas (EKS-Tm) in second and Simone Torsellini (KR-Iame) in third.

IAME X30. The intense weekend in Sarno was completed by the double finals of the Single-Make Trophies Iame X30 and Rok. In Iame X30 Senior the first final was won by an excellent Luigi Coluccio (BirelArt-Iame) who proceeded Danny Carenini (Tony Kart-Iame) and Mattia Ingolfo (KR-Iame) at the flag, while Leonardo Caglioni (KR-Iame) claimed the win in the second final, proceeding championship leader Edoardo Ludovico Villa (TB Kart-Iame) and Carenini, who was again on the podium in P3.

Race-1 of the Iame X30 Junior Trophy was won by the Polish driver Timoteus Kucharczyk (Parolin-Iame), while Francesco Pulito and Michael Barbaro Paparo, both on KR-Iame, closed second and third. Race-2 has been very spectacular and the victory was taken at the last lap by Cristian Bertuca (BirelArt-Iame), who led Keanu Al Azhari (Parolin-Iame) and Alessandro Lizio (Tony Kart-Iame), while Pulito was fourth and led Nikolas Pujatti (KR-Iame).

In Rok Junior Pietro Ragone confirmed his lead winning both finals in Sarno. This result, added to the double win in Castelletto di Branduzzo, take him close to the victory of the Italian title of Rok Junior. Ragone proceeded Riccardo Colombo (Exprit-Vortex) in both finals, while Matteo Zaffarano (Tony Kart-Vortex) was third in Race-1 and Lorenzo Simion (Tony Kart-Vortex) third in Race-2.

GAZZETTA DELLO SPORT. A special page will be published on the sports magazine Gazzetta dello Sport next Thursday, July 11th.

Complete classifications are available at www.acisport.it