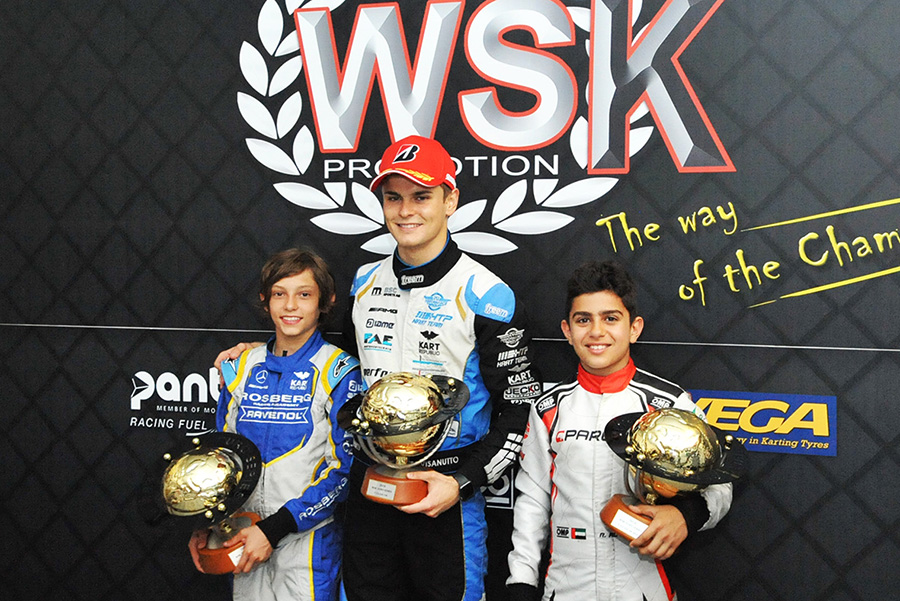 It has been a hard-fought battle. The round in Adria lightened up the night in the closing meeting that named the kings of WSK Euro Series at the end of an overnight racing weekend that took place at the Adria Karting Raceway last weekend. The fourth and closing appointment of the series promoted and organized by WSK Promotion celebrated the winners of season 2019 in live streaming (from the official website wsk.it). The series resumed this year a path that its progenitor WSK International Series started 13 years ago back in 2006. After crowning Marco Ardigò (Tony Kart-Vortex-Bridgestone) as the winner of KZ2 in Lonato (BS) one week previously, the other three categories finally named their winners in Adria. This has been a successful event in a WSK season that brought on track 2000 drivers in the appointments run so far in 2019 ahead of the three remaining Autumn events. In the photo above, the OK winner Lorenzo Travisanutto (on centre) together with Andrea Kimi Antonelli (on the left – OK Junior winner) and Rashid Al Dhaheri (winner of 60 Mini).

Lorenzo Travisanutto’s season (KR-Iame-Bridgestone) has seen attacking moments (the victory at the second round in Muro Leccese) and careful races when needed: in Adria the Italian displayed his competitiveness, despite keeping an eye on the final classification of OK managing the gap to his rivals. He ended the Final in fourth place and has been fighting in the top three, earning the title at 302 points after taking the lead of the charts in the round in Lonato (BS). The other positions went to the Swede Dino Beganovic (Tony Kart-Vortex, 241 p.) and by the Scot Dexter Patterson (KR-Iame, 199 p.), that ended respectively second and third. The Italian Gabriele Minì (Parolin-TM) won the Prefinal and Final in Adria and this earned him the final fourth place of the classification at 197 points. The Dutch Dilano Van‘t Hoff (Exprit-TM) lost his position and ended with a respectable fifth place after getting on the Final podium in Adria.

Andrea Antonelli on top in OKJ

Andrea Kimi Antonelli (KR-Iame-Vega) stepped up the pace during the season before being the benchmark in OK Junior at WSK Euro Series. The Italian improved his performance and was unstoppable in Adria, where he claimed the full-haul and reached 354 points leading the Dutch Thomas Ten Brinke (FA Kart-Vortex, 286 p.) and the Russian Nikita Bedrin (Tony Kart-Vortex, 197 p.). In Adria, the two did not get the same results as earlier in the season, but managed to keep the second and third place of the classification. The American Ugo Ugochuckwu (FA Kart-Vortex) and the Swede Arvid Lindblad (Exprit-Vortex) pulled a great result and secured the fourth and fifth place of the standings respectively with 179 and 175 points.

Category 60 Mini had a sting in the tail that surprised even the protagonist William Macintyre (Parolin-TM-Vega). He has been the driver to beat since the opening round but had a tougher second half of the WSK Euro Series campaign. The British driver won the first two races in Sarno (SA) and Angerville (F), but slowed his pace down in the third round held in Lonato despite managing to keep the lead. Meanwhile, the young talent from the United Arab Emirates Rashid Al Dhaheri (Parolin-TM) collected good points in all the weekends, placing himself in the title hunt without taking any win. At the final race in Adria the 60 Mini classification had three main contenders: Macintyre, Al Dhaheri and the Belgian Douwe Dedecker (who came from the Final win in Lonato) as all three were packed on top of the charts in just over 20 points. The three-way fight was eventually disappointed, as this time the Russian Dmitriy Matveev (Energy-TM) managed to win the Final. Al Dhaheri fought with Matveev and closed his effort in P2: this was enough to get past a struggling Macintyre and win the final classification. Dedecker kept P3 instead. Matveev was fourth thanks to the victory in the Final that relegated the Jamaican Alex Powell (Energy-TM) to P5.

The Italian Aci Karting Championship for OK and OK Junior took also place in a joint event with WSK Euro Series. The three Italian rounds in the calendar were in fact also valid for the Italian title of these categories and the title was decided in the last race. In OK, the classification of the top two was swapped around compared to WSK Euro Series: Beganovic won the title managing the classification advantage he built in the previous round of Lonato. He proceeded Travisanutto and Minì. OK Junior saw Antonelli taking the win again at the Adria Karting Raceway and in one single race he managed to take two important victories for his career. The classification behind him did not change from the result in WSK, with Ten Brinke and Bedrin ending second and third.