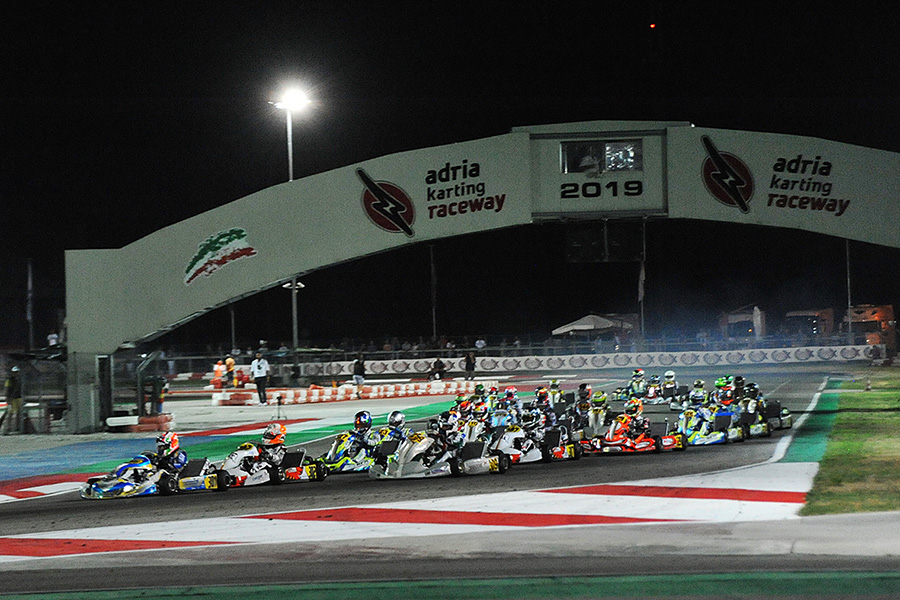 A kings’ night in Adria: the kings of the categories contesting the closing race of WSK Euro Series have finally been named at the end of an overnight race that did not provide clues on the final winners until the end of hard-fought Finals. WSK Promotion has completed its European series with this round at the Adria Karting Raceway at the end of a the four-rounds campaign that visited four of the best circuits in Europe. The Italian ACI Karting Championship for categories OK and OK Junior has been run in parallel to the WSK series this year and reached its conclusion in Adria too.

In OK, Minì won the Final and Travisanutto had the upper hand in the classification 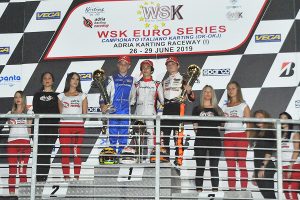 The Italian Gabriele Minì (Parolin-TM-Bridgestone) did not have rivals in the final stages of OK winning the Prefinal and the Final. Minì started the closing race from the pole position and pulled away putting some distance between him and his rivals until when he crossed the finish line without any rival challenging him. Behind him, Kiril Smal (Tony Kart-Vortex) lost some ground at the start but promptly recovered it installing himself in P2. The Russian driver kept the position leading the Dutch Dilano Van‘T Hoff (Exprit-TM), who ended third after climbing up from the seventh place on the starting grid. Despite a weekend among the protagonists, Lorenzo Travisanutto (KR-Iame) did not end on the podium. His fourth position allowed the Italian to capitalize on the points harvested in the previous rounds and to win the WSK Euro Series classification. In the final standings, he leads the Swede Dino Beganovic (Tony Kart-Vortex) and the Scot Dexter Patterson (KR-Iame). The Italian ACI Karting Championship was won by Beganovic, who led Travisanutto.

Antonelli: the ace of OK Junior 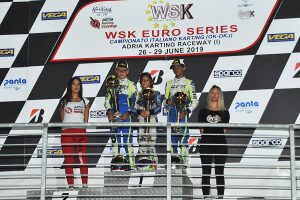 Andrea Kimi Antonelli (KR-Iame-Vega) reached the closer in amazing shape and he did not leave any room for rivals in the night in Adria. Pole position and victory of Prefinal A and Final earned him the victory in the final classification of the category. Behind him in the Final and in the series’ standings, the Dutch Thomas Ten Brinke had to get P2 fighting his team mate from United States Ugo Ugochukwu (both on FA Kart-Vortex), who ended third. Prefinal B winner from Holland Alexander Dunne (Tony Kart-Vortex) was hit by bad luck instead. He had to stop in the closing stages of the Final, as happened to the Russian Nikita Bedrin, who stopped his race in the closing laps but kept the third place of the Final classification. Antonelli claimed also the victory in the Italian Championship leading Ten Brinke again.

In 60 Mini, Matveev and Al Dhaheri have been celebrating their wins 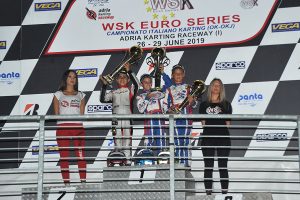 The Russian Dmitriy Matveev (Energy-TM-Vega) built his race win lap by lap after taking the victory in Prefinal A and starting the Final on top. He was chased closely by Rashid Al Dhaheri (Parolin-TM). United Arab Emirates’ driver kept trying until the chequered flag but never managed to find his way past the race leader. He eventually ended the race second proceeding the Russian Kirill Kutskov (Energy-TM), who managed to get on the podium from the starting P5. Prefinal B winner Andrea Filaferro (Tony Kart-TM) was fourth. The points collected with P2 added on top of those secured earlier during the weekend, allowed Al Dhaheri to get past the British driver William Macintyre (Parolin-TM) in the last race and to be first in the final standings of the category. The closing race has also been fruitful for the Belgian Douwe Dedecker (Parolin-TM) who is now third in the standings.