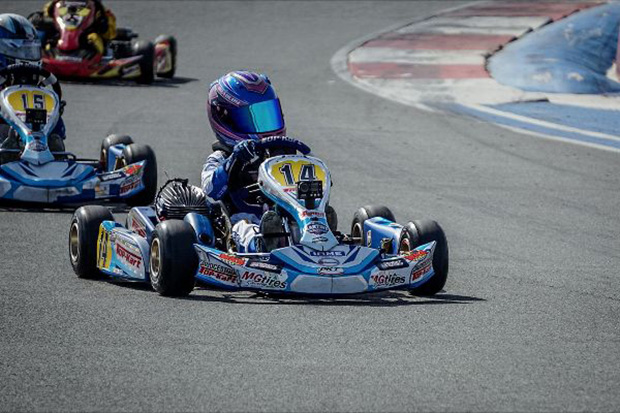 Sarah Bradley Racing made the ten hour trek to the east coast visiting the famed Charlotte Motor Speedway, home of the Coca Cola 600, and also round four of the World Karting Association’s Charlotte Karting Challenge event. WKA looked to make an impression and increase the stakes in 2019 by adding the large venue for the sprint racing event utilizing the Roval course. Total distance over one mile long made for intense battles throughout the weekend’s event with the draft playing a major role.

After a full day of practice under Sarah Bradley’s belt on the high speed course, she was feeling confident in her kart and engine package to begin the racing events through the rest of the national competition weekend. Bradley states, “This is the fastest track I have ever been on before! 70 mph down the straight away was so much fun and being able to make passes as we come down the hill into turn 2 and mix it up with the leaders was exciting.”

As the weekend started to heat up on track during Saturday’s official timed sessions, Bradley positioned herself just outside the top 5 during qualifying for the day. Starting Heat one in sixth position, there was a bit of some rough driving from other competitors that she had to avoid and that caused a gap early on in the race, falling behind the draft. Working hard to catch back up she was able to reel back in teammate Austin Olds and they both were able to push to close the gap on the pack of 5 ahead. With 2 laps to go she was able to make some passes and find her way back to sixth.

A much closer finish between the top seven drivers in the micro swift category during heat two, the group of seven to ten year olds kept a safe and exciting race throughout the ten lapper. Bradley just losing the draft within the last few laps she found herself only 8 tenths behind the leader coming across the finish line.

With a high level of confidence after heat two, team Sarah Bradley Racing is ready to make the final changes to the kart to prepare it for the Final event of the day. Being towards the end of the race rotation, the crew had plenty of time to think of their strategy on how to move through the field and stay fast throughout the entirety of the run. With only three classes before the micro drivers suited up to take the track, mother nature decided to rain on the parade bringing thunder and lightening over the speedway causing the rest of Saturday’s racing events to become delayed. Due to the circumstances and rulebook, the drivers were rewarded a finishing position based on where they would start the Final. Unfortunately for Sarah Bradley, this was not what she was wanting as she had a fighting chance to drive her way up to the podium in the final race of the day.

Sunday morning began as a nice and cool day. The karts rolled off grid for warmup session and Bradley looked to have her best session yet being third quick after harnessing all of that energy for the final the previous race day that they were unable to complete. Looking to make a solid qualifying run for the day she was able to earn a sixth place starting spot for the day’s pre-final race.

The kart setup by father, John Bradley, was handling like a dream for the young nine year old. During the pre final event there was significant battling going on through the entire field as they were drafting the entire race. With more than 10 lead changes between the drivers and multiple drivers able to lead laps it kept them all on the front of their seat. Bradley stayed in the draft consistently throughout the race, patiently waiting to make her move. On lap nine she had made a few bold moves getting herself to fourth position. Heavy fighting for the top spots on the last few laps of the thirteen lap pre-final, she had attempted a pass for third and lost her momentum dropping back to seventh across the checkers.

Having made some slight adjustments after the pre-final to give Bradley the extra edge she needed, the kart was ready to take track for the final event of the weekend. The first half of the race was neck and neck between the top 7 karts swapping positions almost every other turn. Lap six was where the second half of the pack were still battling for position and the front half was able to just sneak out of the draft. Sarah using this to her advantage was able to make a pass to get behind her Top Kart teammate Austin Olds. Bradley and Olds worked together to try and make up some ground on the front pack. Hustling around the track Bradley was determined to reach a top five spot during this race. On lap ten of fifteen she was able to get herself into the fifth place position and drive a smooth race across the finish to earn her first national event top five finish. When asked about the weekend, John Bradley explained, “This weekend was a great boost of confidence for the team and driver. It proves with the right equipment and surrounded with the right people nothing is impossible.”

Sarah Bradley Racing looks to continue this momentum into the second half of the season with this event being the midway point for 2019 as he next upcoming event will be for the Route 66 Sprint Series at Road America July 12-14.