Parolin: Another 60 Mini Podium in the WSK Euro Series at Lonato 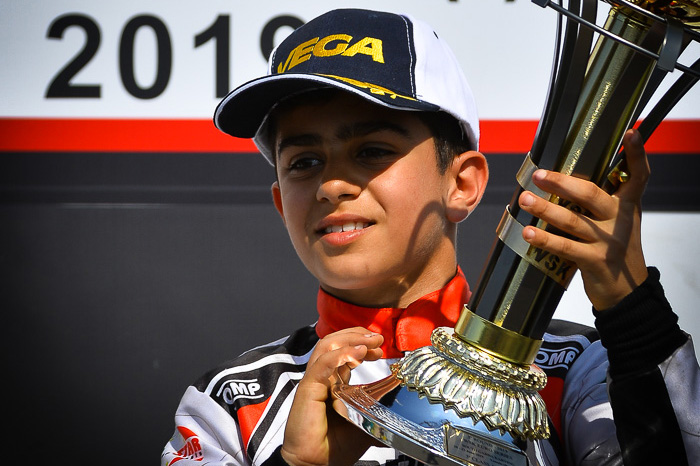 In the third round of the WSK Euro Series held at Lonato, Rashid Al Dhaheri took 3rd place on the 60 Mini podium while returning to 2nd place in the Championship. In OK, Gabriele Mini’ had an incredible mishap when he was due to achieve an excellent result. The common point of these two outcomes remains the high standard of performance of the Parolin / TM in international competition.

“It is impossible not to be disappointed by the mishap that hit Gabriele Mini,” said Marco Parolin. “Losing a piece of bodywork in the middle of the Prefinal when we were closing on the leader is still a painful moment. Fortunately, our competitiveness was once again excellent this weekend. And Rashid Al Dhaheri managed to race well in the 60 Mini category despite tough battles.”

The chassis manufacturer Parolin Racing Kart can once again be congratulated on its top position in the 60 Mini category with 40% of the WSK Euro Series field at Lonato. Success was also there with the two fastest times of Qualifying, the leadership of the Qualifying Heats 12 wins out of 15 and 11 fastest laps in the race set by seven different drivers. The competition continued with both wins in the Prefinal and the Final victory with the fastest lap in the race. In addition, Parolin placed five of its chassis in the top six.

The 60 Mini competition was even livelier than usual in Qualifying. After setting the 12th fastest time, Rashid Al Dhaheri drove four very good heats, but gave up in the last. 17th in the intermediate classification, he performed magnificently by taking 2nd place in his Prefinal and continued his momentum reaching 3rd in the Final. With this important result, Rashid has progressed to 2nd place in the Championship.

Very effective in the heats, Keanu Al Azahri set two fastest times and finished with a 2nd place and a victory, which gained him 10 positions over his Qualifying position. Although he was a little ahead in Prefinal A when his line started less well, Keanu fought bravely to gain ground in 12th place in the Final. Among the other three drivers of the team qualified for the Final, Giovanni Trentin finished 17th with a gain of 20 places since Qualifying and Maxens Verbrugge took 35 places to finish 22nd.

Gabriele Mini’s justifiable ambitions in OK flew away with his bodywork in Prefinal A of the WSK Euro Series. This is all the more regrettable because he was extremely competitive at Lonato. Twice 2nd and once victorious in the heats, he set two fastest times. He came back to 2nd in the Prefinal and was close to the leader when he was forced to stop. Hugo Sasse, meanwhile, made a promising comeback to 8th in the Final with a total gain of ten places during the weekend. The results for the young OK-Junior drivers were less eloquent, with only Brando Badoer managing to qualify for the Final after three strong heats.

The Parolin Racing team will have little time to breathe before heading to the Adria circuit for the last round of the WSK Euro Series from 27th to 30th June.