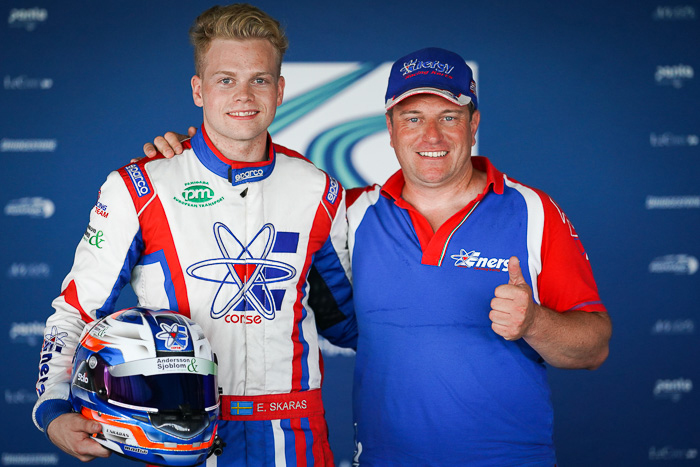 With a new crown in Italy with the Swedish driver Emil Skaras, Energy Corse is more than ever the most successful team in KZ2 over the last 15 years. In total, Energy Corse has seven European KZ2 Championships, a World victory and a 2nd place in the KZ2 International Super Cup, a European KZ Championship and countless podiums in the FIA Karting events! After the magnificent success for Skaras at Wackersdorf, “Energy Power” still shone over Sarno!

Energy Corse continues to be present at major events, thanks to ongoing equipment development work, incredible commitment from every member of the team and unconditional support for its drivers. “After my victory in the first round of the European KZ2 Championship in Germany, I knew the competition would be sharper than ever at this final event in Italy,” said Emil Skaras.  “The Sarno weekend was never easy, we had to fight constantly and work hard to stay in the leading pack. The important thing was not to make mistakes and manage my lead in the Championship. I finished every heat in the top six and I was able to score enough points in the Final to take the title. The Energy Corse team has done a fantastic job since the beginning of the season and I also thank my engine builder, Galiffa Kart. Many big teams are involved in KZ2 and it’s great to be able to beat them in this European Championship!”

Energy Corse enabled Isack Sjokvist, also from Sweden, to join the starting grid of the Final thanks to remarkable progress in the Qualifying Heats.

In recent weeks, many other podiums have rewarded drivers in the Energy Corse colours.  Already the leader of the German Junior Championship (DJKM) when he arrived at Wackersdorf, the Dutchman Robert De Haan added two superb victories to his record and widened the gap in the overall standings. De Haan is also a major player in the European Championship, as evidenced by his 4th place in the Final at the Belgian Grand Prix at Genk.

The harvest of trophies also continues in 60 Mini, a category where the knowledge of the Italian brand continues to be confirmed with each new competition. In the Italian Championship, Alex Powell imposed his Energy Corse chassis very well in Race 2 on the Castelletto circuit. The young Jamaican mounted the podium again at the next race in Siena, again in Race 2. This time, another driver in the colours of Energy Corse dominated the race and took the finish as a big winner, Francesco Marenghi from the ASD Revolution team.

In France, Clément Outran has taken two very important victories in Mini: at Brignoles during the very competitive French Cup and at Laval in the IAME Series. And in Russia, the Ni Racing Energy Russia team dominated the third round of the Championship on the Kursk circuit. This meant we saw four Energy Corse chassis in the top four places of the Super Mini category, as well as a magnificent double in Mini!