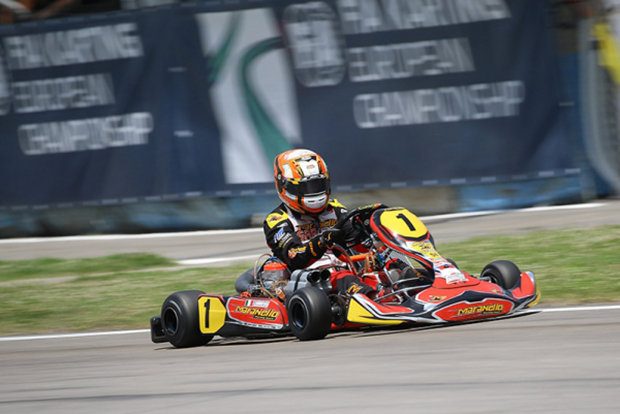 Fabian Federer had to retire from the Final of the KZ2 European Championship after hitting several technical problems connected to the very high temperatures. The next round on track for Maranello Kart is WSK Euro Series in Lonato next June 23rd.

Following the positive performance in Wackersdorf – a ninth place with a spectacular 13 place comeback – Federer had several carburation issues since qualifying this time around, but managed to pull a good ninth time overall being 0.2s off the pace of the leader. The very high temperatures made Federer experience these problems also in the heats and he could not improve his performance. He eventually had to retire from the Final after holding P5. This was a pity as Federer could have been among the main protagonists of the weekend in Sarno.

WSK EURO SERIES. The European Championship been archived, Maranello Kart will get back on track soon for another important appointment. The third round of WSK Euro Series will in fact take place in Lonato from June 20th to 23rd. A total of 313 drivers are in the provisional entry list, 84 of which in KZ2. Team SG Race will field Massimo Dante, Andrea Ceresoli and Gabrio Bizzozero, SRP Racing Team Enrico Bernardotto and team Oracle Racing Luigi Del Vecchio. Alessio La Martina will also be present.