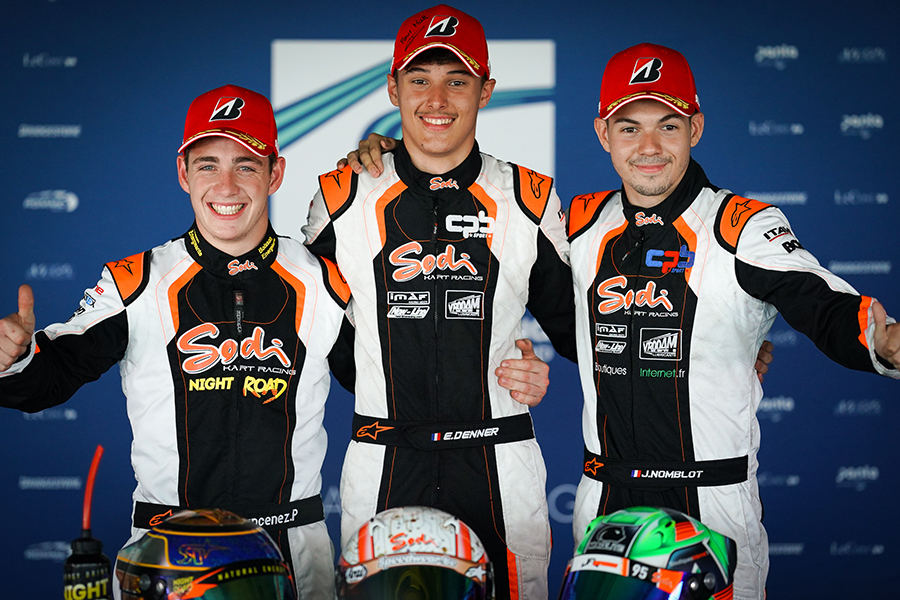 At Sarno, the CPB Sport Sodi-TM karts have amassed an outstanding trophy collection in the final round of the European KZ2 Championship. Emilien Denner took the victory and the opportunity to finish as 2019 European Vice-Champion. On Italian soil, Jean Nomblot completed the French team’s triumph by mounting the podium, highlighting the very high performance of the Sodi chassis.

The KZ2 Final unleashed the passions at Sarno, with a breathtaking show on a track perfect for 125cc gearbox. 4th and 5th respectively on the starting grid, Jean Nomblot and Emilien Denner threw themselves into the battle for victory, aware of the high potential of their machines, as explained by Jean Nomblot, a young and talented hopeful in KZ2, when he got out of his kart.

“I felt extremely comfortable with the equipment throughout the meeting. With the CPB Sport team, we prepared for this great international event at Sarno by participating in the Trofeo Grifone, the WSK and the Trofeo Pagliuca, which I won at the beginning of June. I finished all my heats in the top four, winning on one occasion and finishing in 3rd place, while taking three lap records. I still achieved the fastest time of the Final, tied with Paolo Besancenez! The victory was close, but I am very happy to be on the third step of the podium.”

A great show in the Final

In fierce heat and a track with strong grip, the CPB Sport team prepared the Sodi-TM karts with impressive competitiveness. Emilien Denner gave everything to take the lead of the Final four laps from the finish and triumph with skill and style. “I was looking forward to this moment,” said Emilien. “I think it’s a deserved victory for our performance.”

“This is our fifth victory since the beginning of the season, but obviously the most spectacular,” said Paul Bizalion, the CPB Sport team manager. “There was a great emotion in seeing our two drivers Emilien Denner and Jean Nomblot on the podium, with Émilien on the top step and Kevin Cuoco receiving the best team manager cup.  I would also like to congratulate Paolo Besancenez for his 2nd place, which allows Sodi to achieve a hat-trick in a country where karting is king! A year after Adrien Renaudin’s title of in our colours, we are again very satisfied to become European Vice-Champion with Emilien Denner. We must not forget that behind this fabulous result, there is a lot of work and investment, a valuable partnership with the Sodikart factory, outstanding technicians, an equally intense support to our other drivers and a perfect collaboration with our engines.” Daldosso Racing powered Emilien Denner and Galiffa Kart was in charge of Jean Nomblot’s TMs.

Other victories to pursue in 2019

The desire to make progress for all the team’s drivers remains a constant at CPB Sport. Experience is important at this level of competition and Vyacheslav Putyatin (Ukraine), Mark Villem Moor (Estonia), Daniel Lindholm (Sweden) and Jovan Pavicevic (Montenegro) will have learned a lot at Sarno. CPB also welcomed the comeback in the Final of the Frenchman Hubert Petit (+13) and the Italian Lorenzo Giannoni (+12).

The 2019 season is far from over and CPB Sport has many more challenges ahead, starting with the upcoming WSK races, the rest of the German Championship (DKM) and the FIA ​​Karting International Super Cup – KZ2.