Extraordinary Triple Podium for Sodi in the European Championship at Sarno 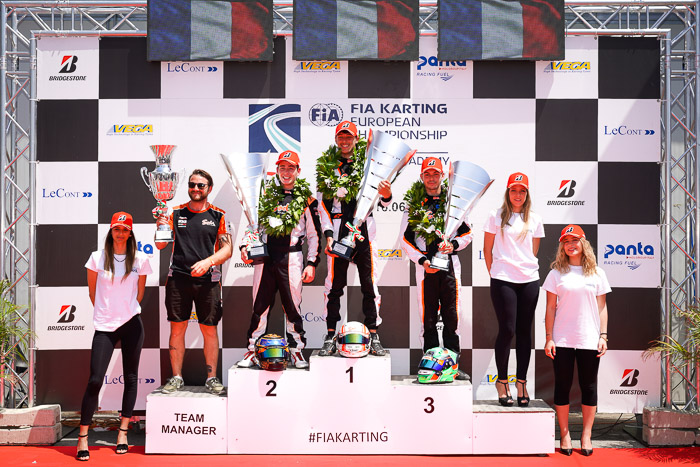 The second and final event of the European KZ2 Championship, raced under the overwhelming heat near Naples (ITA), will be remembered in karting as a major event for Sodikart. While the official Sodi drivers were fighting for the KZ title, three young drivers were making a splash by monopolising the KZ2 Final podium with a rare triple win at this level.

Seeing Emilien Denner, Paolo Besancenez and Jean Nomblot triumph over their opponents at Sarno and in the Sodi colours is an unforgettable moment for France and for Sodikart. The French chassis have demonstrated constant competitiveness in the heat of Italy. While the temperature reached 35° in the air and exceeded 50° on the track, the specifications of the 2019 Sodi range were met perfectly with chassis that were easy to control and that perform well in all conditions.

Denner and Nomblot competed with the Sodi CPB Sport team, while Besancenez ran as a private driver. All three were equipped with TM Racing engines, but with three different tuners with the same competitiveness: Daldosso for Denner, Cédric Sport Motors for Besancenez and Galiffa Kart for Nomblot. They had excellent Qualifying Heats, each setting one or more fastest laps in the race to move up on the starting grid of the Final. Moving up 10 places during this qualifying phase, Nomblot was credited with the fastest lap three times. After a stormy start, the three Frenchmen gathered in the top five and launched an assault on the lead by taking turns behind an uncooperative leader. Denner was the first to overcome the resistance of their common opponent, followed by Besancenez and Nomblot, who set another fastest lap in the race. Like a parade, the three Sodi spent the final laps in the top three and achieved a historic treble in front of their dumbfounded rivals.

Their joy broke out on the 100% French podium, especially as Denner became Vice-Champion of Europe, Besancenez took 3rd place in the final classification and Nomblot made a jump from 31st to 8th place.

“We are particularly pleased with the success of these three drivers from different teams,” said Julien Dexmier, the head of the Sodi Racing Team. “It’s very important for our brand to contribute to the success of drivers and private teams. All deserve to be warmly congratulated.  I am sure that the Sarno demonstration will not go unnoticed. Unfortunately we did not experience the same success in KZ where the European Championship escaped Anthony Abbasse because of an incredible collision at the start. Bas Lammers however had a great race to finish 2nd and Adrien Renaudin confirmed his place among the best.”

The Final that would lead him to the title of European Champion in KZ only lasted a few seconds for Anthony Abbasse who started from the second row. One of his opponents put him in the barrier at the first corner and he could only watch the race from the side of the track.  Unleashed, Bas Lammers went back to 2nd place and posted the second fastest time by just two thousandths of a second on the penultimate lap. Very disappointed to have been prevented from defending his chances, Abbasse still finished 3rd in the Championship, just one point behind the title, tied with Lammers in 4th, while Renaudin, who was 6th in the Final, was close to the European top 10.

There is no doubt that the overall performance of Sodi chassis at the highest level is a major step forward in the strategy of the French brand in racing and that other great successes will soon confirm its international ambitions.