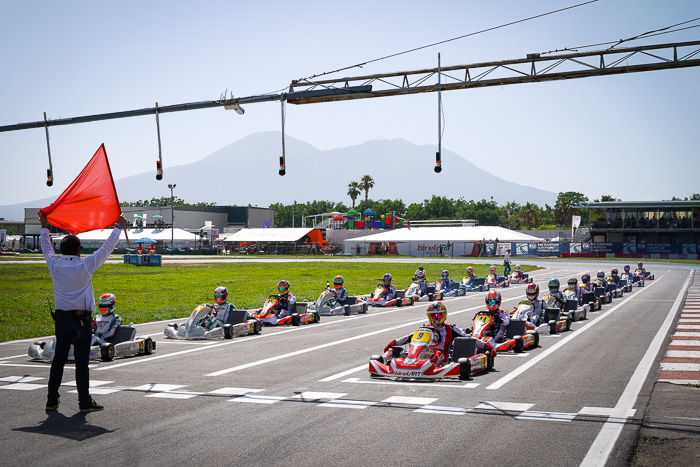 The Birel ARTs of the Lissone factory’s official racing service impressed with their top performances at the Sarno circuit during the second round of the European Championship. Alessandro Irlando in KZ and Riccardo Longhi in KZ2 positioned themselves as serious favourites in the double title race. An incident unfortunately eliminated Irlando as he began his ultimate run to the European crown, while Longhi, making a great comeback, just missed the win in the Final clash.

“That’s racing, we all know it’s hard and sometimes unfair, but it’s the passion we all share within Birel ART since its inception 60 years ago,” said Luca Filini, the Racing Team manager. “In the evening at Sarno, we have mixed feelings. Of course, we have not yet achieved our goal of victory, and it is always annoying. But we were very good performers and that pushes us to continue our work every day with more motivation. The goal is now to do everything possible to shine during the World Championship.”

Among the multiple reasons for satisfaction at Birel ART, its presence at the European peak of the gearbox categories is particularly pleasing. In the KZ category, which brings together the best drivers in the world, the rise of Alessandro Irlando since the beginning of the season has been noticed.

Irlando so close to the goal

After setting the 2nd fastest time in Qualifying, Irlando improved steadily, finishing his heats with a victory and two fastest laps. Well placed on the front row of the start line of the Final, Alessandro had an undeniable advantage in front of his main rivals for the title. He started perfectly when the lights went out and took the lead of the race after a few metres. Unfortunately, an impatient rival attempted an attack on the second lap and went over the Birel ART, condemning him to retire.

Until now unobtrusive in the heats, Marijn Kremers made an interesting comeback in the Final which gave the team the consolation of a top five with the third fastest time for the last European KZ race of the season.

Riccardo Longhi arrived in Sarno in 5th place in the European KZ2 Championship after his podium finish in Germany. However the Neapolitan competition did not go well during Qualifying. He was among the fastest in Practice, but only finished 7th in his session and 21st overall. A big challenge was presented to him in the Qualifying Heats.  Riccardo repeatedly regained between four and six places in each heat, thanks to the competitiveness of his Birel ART / TM Racing which allowed him to set three fastest laps. This beautiful recovery of 15 places was worth it to start from the third row of the Final starting grid.  Despite all his efforts, it was not enough to win the title. In a last, hotly contested race, he returned to 4th place with the third fastest time.

The performance level of the team was confirmed by the gain of 17 places in the Final for Leonardo Marseglia who finished in front of the very consistent Pierre Loubère. Starting from a distance in the Qualifying Heats, Andreas Dahlberg had three great runs but could not qualify for the Final because of a double retirement.

The Birel ART Racing Team is now preparing for the next European OK and OK-Junior meeting at Le Mans before thinking of the two world events in September in Finland and at Lonato in Italy.