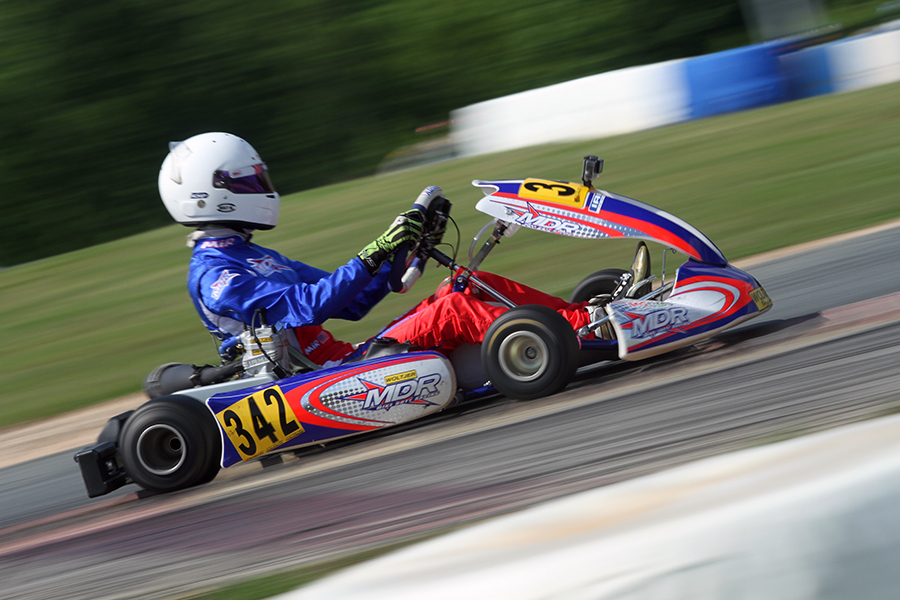 Round Three of the 2019 United States Pro Kart Series presented by MG Tires completed under sunny skies at the GoPro Motorplex on Saturday, as the record-breaking event ran the first of two days of competition. The 182 entries over the seven IAME categories set a new series record for the seven-year-old program, breaking the 178-entry mark set back in 2015 at the same Mooresville, North Carolina facility. The first day of action at the Carolina Grand Prix saw exciting racing throughout all the divisions, with drivers making history of their own.

Two-time defending series champion Brandon Jarsocrak (MDR / Tony Kart) set the bar at the track he won twice at in 2018. A 47.531-lap set the fast time for Jarsocrak, leading the 38-kart field to the green flag in the Prefinal. Jarsocrak would hang on to the win in the 18-lap race, edging out second-place qualifier Josh Green (MDR / Kosmic) by 42 thousandths. They led the field to the green flag in the 24-lap main event with Jarsocrak able to get a large lead in the opening circuit. Green ran down his teammate, taking the lead on lap five. Fighting behind him for the second spot allowed Green to establish a comfortable lead. With fast laps of the race, that comfort grew to a near seven-second advantage by the checkered flag. The only blemish in Green’s inaugural Senior victory was his failed attempt at celebrating the victory as he reached the checkered flag, spinning off course and nearly into head flagman Denny Long. The fight continued for second until the final corner with Blake Hunt (Tony Kart) working past Jarsocrak with Ashley Rogero (Tony Kart) and Pauly Massimino (MDR / Kosmic) completing the top-five. 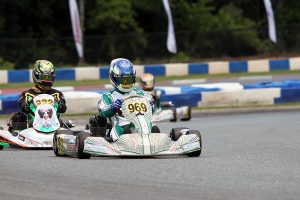 It was a solid day for Hunt, as the KA100 Senior championship leader grabbed his first series victory. GoPro regular Brooke Nachtmann (Tony Kart) set fast time in qualifying, edging out Texan Austin Osborne (IRM / Kosmic) by 78 thousandths of a second. Hunt was sixth in the session but worked his way up to second in the Prefinal with Osborne taking the win and Nachtmann down to fourth after a two position bumper penalty. A wild opening circuit took Osborne out, along with Senior rookie Garrett Adams (Comet / FA Kart). Round One winner Josh Hotz (Franklin / Merlin) came out of the chaos with the lead while Hunt and Nachtmann trailed. They would run him down and eventually drop him off the draft. Nachtmann led the majority of the second half, leading at the white flag. She shut the door on Hunt at the bowl, and remained leading at the hairpin. Hunt made a great dive inside at turn nine, holding the inside through the double right-hand corners and managed to reach the checkered flag first. Nachtmann had to settle for second with Hotz helping his championship chase with the third step on the podium. Matthew Mockabee (Comet / Kart Republic) came from last, 27th, after a DQ in the Prefinal for being too wide and knifed his way up to fourth ahead of Emory Lyda (Nitro Kart). 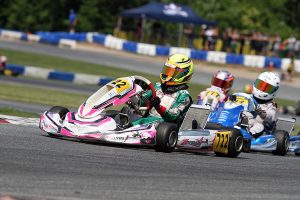 The outside line held for Jeremy Fletcher on the final lap to earn the X30 Junior victory (Photo: EKN)

The X30 Junior division appeared to be Brent Crews (KSNA / FA Kart) to win. Setting fast time in qualifying and winning the Prefinal after a bumper penalty to Kyffin Simpson (SCR / Tony Kart), Crews was joined in the lead group by Simpson and Jeremy Fletcher (Zanella / Tony Kart). The trio swapped the lead a number of times during the 24-lap Final, with Crews leading at the white flag. A defensive line down the back straight, Simpson fell in line while Fletcher gambled to run the highline. He stayed out of the marbles enough to hold on and pass both for the lead. The move paid off, reaching the checkered flag first to become the third different winner on the season and his first in the category. Simpson ended up second with Crews back to third. Round One victor Connor Zilisch (LAK / Tony Kart) knifed his way forward after a DNF in the Prefinal to fourth, until he was handed a four-position penalty for pushback bumper. That promoted Round Two winner John Burke (Supertune / Tony Kart) to fourth with Thomas Annunziata (TF / Kart Republic) into fifth. 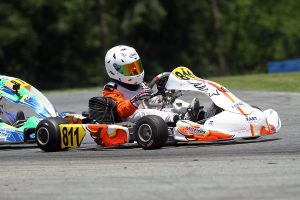 Two in a row for Brent Crews in the KA100 Junior division (Photo: EKN)

The KA100 Junior class was all Connor Zilisch (LAK / Tony Kart) for much of the day. Searching for his first victory in the category on the year, Zilisch set fast time in qualifying and won the Prefinal. It was a battle to the end as the lead group was only a few, but grew as the racing continued in the Final. Zilisch seemed to be in the perfect position toward the end, sitting second until a broken chain took him out of the race with two laps remaining. That opened the door for Brent Crews (KSNA / Kart Republic) to step up and grab the victory for his second straight in the class. Hayden Jones (Nitro Kart) drove up from 11th to end up second ahead of Chloe Chambers (MDR / Kosmic). Westin Workman (TT / CompKart) was fourth with Sam Corry (MDR / Tony Kart) up to fifth after penalties dropped a number of drivers out of top-five. 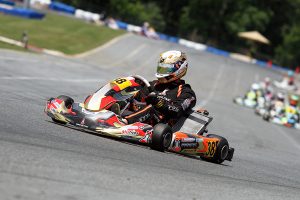 The streak of first time winners continued into the X30 Masters class. Scott Kopp (Innovative / Exprit) led wire-to-wire in the main event for his first series triumph. Max Papis, the veteran professional driver, made his series debut with the fast time in qualifying. Scott Roberts (SCR / Tony Kart) and Kopp would work past Papis in the Prefinal, with Kopp getting the win. Contact in the opening corner sent Roberts around at the exit, and out of the race. This allowed Kopp to establish a solid lead, which he increased with fast laps of the race, to reach the checkered flag out front by over three seconds. Darin Marcus (Fullerton) took advantage of the shuffle at the start, coming out in second and holding through the 22 laps. Papis ran third, but dropped down the order to sixth after pushback bumper penalties shuffled out. Laurentiu Mardan (Tecno) came out with a podium finish in third with Round Two winner Danny Robertson (OGP / Tony Kart) in fourth and Round One victor David Galowina (TT / CompKart) in fifth. 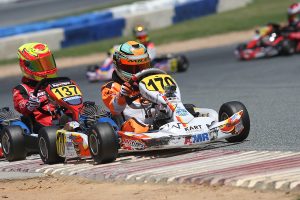 It was an emotional victory for Christian Miles in the Mini Swift category. The KSNA / Kart Republic driver found himself back in 13th after qualifying with Anderson Leonard (Supertune / Tony Kart) setting fast time. Championship leader Kai Sorensen (Supertune / Tony Kart) came away with the win in a wild Prefinal that saw Miles up to third. The excitement continued in the Final with nearly a lead change at the line every lap, including a number of drivers. Eventually, Miles established himself as the leader and fighting for second helped him to pull away to a four-second victory. The win was dedicated to his late grandmother who passed away this week. Parker DeLong (Nitro Kart) came out in second with Cooper Shipman (Tony Kart) up eight spots to the third step on the podium. Cameron Weinberg (Nitro Kart) advanced 11 positions to fourth with Max Garcia (KSNA / Kart Republic) bouncing back from a DNF in the Prefinal to fifth, improving 23 spots. 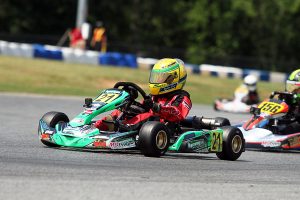 Completing the first time winners on the day was Aryton Grim (Nitro Kart) in the Micro Swift. James Moss (Benik) set fast time in qualifying and ended up placing second to Grim in the Prefinal. The two pulled away from the field to settle the battle for the victory. Grim secured the victory with a last lap, last corner pass to secure the win with Moss earning fast lap honors in his runner-up performance. Nash Gierke (Kart Republic) completed the podium, beating out Hoyt Mohr (Nitro Kart) for the third spot with Garret Andexler (Kart Republic) in fifth.