Round Four of the Los Angeles Karting Championship was held on May 26 at the CalSpeed Karting circuit. Another busy weekend at the Fontana, California facility as the southern California program nears the halfway point of the 2019 season. Weather brought a bit of drama throughout the day as a splash of light rain came and went, especially for some of the main events around the ‘Tecnico’ layout. Competitors were also able to use the event as a warm-up for the upcoming California ProKart Challenge event. First on the docket, a number of drivers repeated in their respective categories to further strengthen the championship bids. 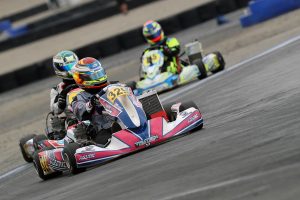 The IAME KA100 movement is well underway throughout the United States, even at LAKC. The largest category of the weekend was the Sanner Racing KA100 Junior division with 15 drivers. It was the same name at the top of the result sheets for a third straight event – Cole Morgan. The Round Two and Round Three winner cleared the field in qualifying by over two tenths of a second before leading wire-to-wire in the Prefinal. Morgan led the field to the green flag in the Final, and was then challenged by Ethan Lampe. The two exchanged the lead a number of times until Morgan secured the position and his third victory of the year. Lampe settled for second, his best finish of 2019. Steven Grafton joined them on the podium while Luca Ciambra and Jacob Yesnik won the battle for fourth and fifth.

In the HRT KA100 Senior class, Jake Drew secured his second victory of the season in dominating fashion to solidify himself as the championship leader. Drew went unchallenged on the day, beginning with a lap four tenths quicker than any driver in qualifying. He then led wire-to-wire in both the Prefinal and Final, highlighted by an 11-second margin of victory. Cesar Campos Jr. won the battle for second over Dakota Tate and Douglas Creesy with Cameron Noble completing the top-five.

Drew came away from the event with two victories, scoring victory in the competitive 2 Wild Karting X30 Pro class. SKUSA #3 plate holder Dante Yu set the tone for the day, edging out SKUSA Pro Tour WinterNationals winner Christian Brooks and point leader Joey Brienza. Drew ended the session in fourth, but shuffled back to seventh after the Prefinal with Brooks at the head of the field. After just three laps to begin the Final, Drew was up to the third spot as Brooks and Round Three winner Billy Musgrave fought for the lead. Drew jumped both on lap 13, and led the remainder of the race for the victory, his first of the season and the fourth driver to win in the category in 2019. Musgrave and Brooks joined him on the podium with Bryce Stevens in fourth and Jake French in fifth.

Musgrave was not able to earn another double win weekend, although he did extend his win streak to three in the Baldozier Racing Pro Shifter 1 class. Jake French, also running double duty on the day, bested Musgrave for fast time in qualifying with a 43.521-lap. Musgrave then went on to win the Prefinal and Final with French placing second. John Crow continued his double win round performance, scoring victories in the Nash Motorsportz G1 division and the Fleming Racing Engines KA100 Super Master. Both were event sweeps with besting Carl Lewis in G1 while outrunning Howard Combee and Scott Grundfor in KA.

Adding to his win total on 2019 was Jesus Vasquez Jr. in the P1 Engines Mini Swift class. After missing out on the win in Round Three, Vasquez nearly pulled off a maximum points effort. Logan Toke edged out Vasquez for the fast time in qualifying by 93 thousandths of a second. Vasquez responded by stealing the Prefinal away from Toke. Vasquez led the majority of the main event with Toke taking the lead with three laps to go. On the final circuit, Vasquez secured the top spot and his third victory of the season. Toke settled for second with Izaac Gutierrez joining them on the podium. Dane Idelson and Evan Reuben completed the top-five. 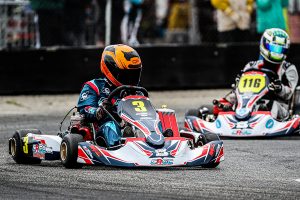 Continuing his win streaks on the year was Zate Legend in Formula Works Kid Kart Expert class. Legend swept Round Four to earn his second straight, third victory of the season. Round Two winner Keegan Ellsworth was second with Nixon Ellsworth in third. It’s a similar record for CalSpeed General Manager Mike Smith in the Ruthless Karting KA100 Master division. Smith swept the fourth round to earn his second straight and third overall on the season, outrunning Ricardo Arruda.

The record is four-for-four on the year in MRC S3 Novice Stock Moto category for Vicente Salas. With a perfect score on the day, Salas has earned maximum points over the first four rounds of the championship. Luca Bortone and Nilas Hygum completed the podium on the day. While Mathias Coito does not have a perfect score after four rounds of racing, he does have four victories in the Kimball Williams Racing S5 Junior Stock Moto class. Coito completed a sweep of Round Four to extend his winning streak, beating out Kailey Meris and Ansel Baldovin for the victory. Chris Muecke has three wins on the season in the Nash Motorsportz S4 Master Stock Moto division, running Round Four uncontested. Wolfgang Kladde has two straight in the MDG Karting X30 Intermediate category after his sweep of Round Four. Ian Bland and Ian Bier joined him on the podium, both still winless in 2019.

Leading the charge of first time winners in 2019 was Blake Nash in the Mack Motorsports X30 Junior class. Colin Queen set the pace on the day, posting fast lap and winning the Prefinal in search of his first victory on the year. Nash started the main event in fifth, behind Round Two winner Carson Morgan and Round Three victor Cole Morgan. Nash was able to take advantage at the start, jumping out to the lead and never looking back. At the checkered flag, Nash held a six-second gap to claim his first LAKC victory. Carson Morgan won the battle for second over Queen with Cole Morgan in fourth. Ayden Aquino completed the top-five.

Empire Karts Micro Swift welcomed a first time winner in G3 Argyros. It was a great fight throughout the day with Rocky Moran setting fast time in qualifying while Truly Adams won the Prefinal. Argyros was in the hunt all day, and grabbed the lead in the Final on lap five, holding the top spot the rest of the way for his first series victory. Jayden Johnson worked past Moran to grab the second spot. Sebastian Hauser was fourth with Caden Chrisman in fifth. Oscar Padilla earned his first HPD Novice Kid Kart victory on the season. It was a sweep of Round Four for Padilla, beating Gavin Lewis and Christian Johnson. Emon Fazlollahi made his first start in the Mad Old Nut Racing Pro Shifter 2 division for 2019, and came out of the Final with victory. Fazlollahi beat top qualifier and Prefinal winner Connor Robles and Matt Treglia to become the fourth different winner on the season. Javier Colombo swept the action in Phil Giebler Racing Open Shifter ahead of Zoli Sule.