Scott and Dolian double up at The Park 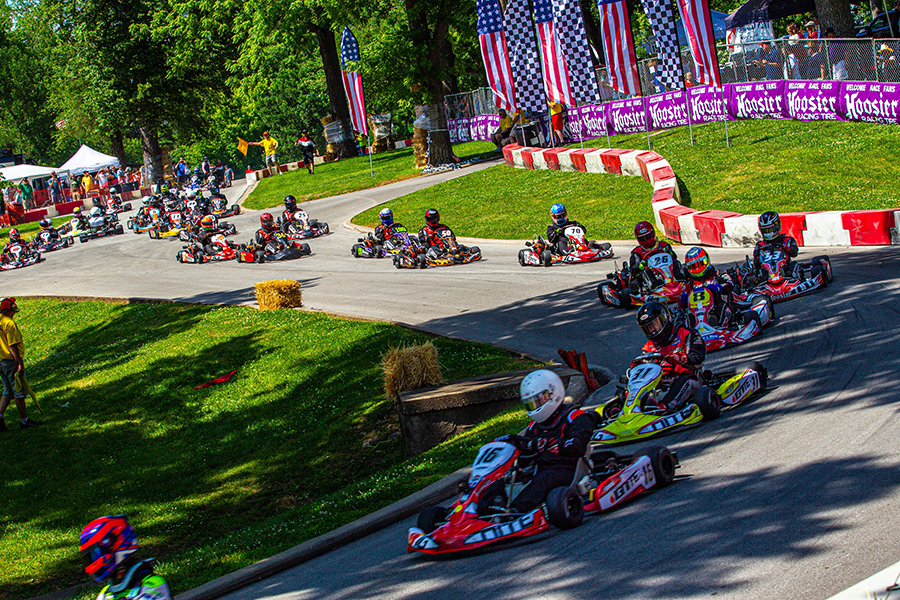 Quincy, Illinois was the hub for karting in North America during the early decades of karting. Gus Traeder was a racer, but more importantly a promoter, and made the ‘Gem City’ a destination for the sport. Not only was the TNT Kartway facility in West Quincy, Missouri – owned by Traeder – the site of many national and international events, he brought karting to the people with the Grand Prix of Karting in South Park beginning in 1970. ‘The Park’ was a fan favorite for locals to enjoy racing once a year, and a chance for karters to push the limits in front of spectators. 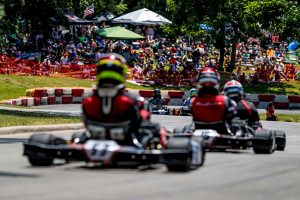 The event had a 32 year run, ending in 2001 but was revived by Gus’s son Terry Traeder last year. The 2018 Quincy Grand Prix was an instant success, welcoming 302 entries around the 1.125-mile course with thousandths of spectators surrounding the circuit throughout the weekend.

This past weekend, the 2019 edition of the Quincy Grand Prix took to The Park once again with 307 entries racing in the nine main events and three ‘Saturday Sprint’ races. Each of the nine main event winners took home the ‘Gussie’, the trophy honoring the late Gus Traeder. Two drivers were able to take away two Gussie trophies of their own while others added to their Quincy Grand Prix win totals.

Riley Scott came into the weekend as the defending winner in the Briggs 206 Medium class. Beating 15 drivers last year, the total doubled for the 2019 edition in the category. Scott found himself eighth on the grid after qualifying with Adam Kilingele coming up with quick time in the session. Kilingele drifted back in the main event, eventually out of the race at the halfway point. Scott advanced forward, eventually working past early leaders David Borntreger and Evan Stamer. Scott held the lead for the last six laps of the race, fending off a charging Eli Fox – who posted fast lap of the race. Stamer finished third with Gage Kemp and Borntreger completing the podium. 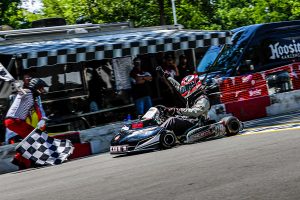 Riley Scott crossing the line for one of his two victories on Sunday (Photo: Margay Racing / Mark Schwigen)

The largest class of the weekend was the Briggs 206 Heavy division with 43 drivers taking the green flag. Borntreger set fast time in qualifying, edging out Jeff Dolian by 62 thousandths. Scott was sixth in the order but was among the lead group once the green flag waved in the main event on Sunday. Dolian and Borntreger paced the field until AJ Roderick shuffled up the order, taking the lead on lap six. Scott followed through, taking over the top spot on lap 10. The race went down to the wire as Scott edged out Borntreger by 71 thousandths of a second at the line for his second victory of the day. Dolian was third with Roderick fourth and last year’s winner Tony Neilson in fifth.

Riley Scott – “I’m still trying to let it all soak in. Winning the first race meant a lot because I was the hometown racer and everyone knew me. I signed autographs, which was a first and my “fan club” made a fathead of me. During the race I was running about third and there was a huge red flag. I saw my sisters kart but I didn’t see her so I hopped out of my kart to find her and make sure she was ok, sitting on the grid having to gain my focus again was a challenge. Then to go out and do it again without my dad there to help me was difficult, driving against some of the toughest competition around. After looking at the program for the race and looking at the past winners, it just seems like a dream.” 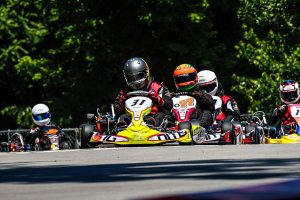 Jeff Dolian is among the many names who were part of the winner’s list for the original years of the Quincy Grand Prix. Dolian won in 1999 as a Junior and again in 2000 racing the ‘Sportsman’ class, competing in 4-cycle divisions. Last year, Dolian was shut out in the win column, with the Texan making up for it with a sweep of the Margay Ignite divisions. The Senior class grew to 33 drivers with Dolian handed the pole position after Evan Stamer posted fast lap, but came across the scales underweight. That was all Dolian needed as he made his Margay wide, leading all 12 laps and held off Avery Schwalm at the line by 51 thousandths. Stamer made it an exciting race, coming from the tail of the field to third. Fast lap however went to Hunter Richardson, placing fourth with Gage Kemp winning the fight for fifth.

Dolian did not record a lap in qualifying for the Ignite Masters class, as Nick Todtenhaupt claimed fast lap in the session. Dolian was inside the top-10 of the 22-driver field as they left the two-sided Le Mans style start to begin the main event. In total, there were six lead changes at the line in the 12-lap Final, with Dolian in the mix. Last year’s winner Colin Predith took the lead on lap six with Dolian on his bumper, along with last year’s Senior winner Keith Scharf and eight-time Quincy winner ‘Pistol’ Pete Vetter. On the final circuit, Scharf did not come back around, as the other three came through the last corner three abreast. Dolian had the inside line, and reached the stripe first ahead of Predith. Vetter found himself in the outside barriers trying to hold the dirty line. That allowed Todtenhaupt to slide through for third with Margay owner Keith Freber alone in fourth. Jeff Scales completed the top-five.

Jeff Dolian – “Racing and winning at The Park and the Quincy Grand Prix was always one of my favorite memories of racing karts in the 1990’s. Having the opportunity to come back to Quincy and not only win but win twice at one of the most historic karting street races in the country was just an incredible feeling!” 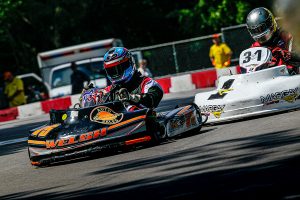 It was nearly three Gussie trophies for Dolian on the day with the Briggs 206 Masters class directly following his second win. Dolian started second with Donald Newman earning the pole position with fast lap in qualifying. The top four, including last year’s Saturday Sprint winner Jeff Scott and former Quincy winner Michael Welsh, were within 97 thousandths. Scott retired after the second lap while Dolian and Welsh drove away from the rest of the field. Welsh led the majority of the 12-lap race, with Dolian working past on the final circuit to cross the line first. Officials handed Dolian a one position penalty for a ‘driving infraction’. That handed Welsh the victory, and put him in the four-wins at Quincy category alongside Dolian, Rick Fulks, NASCAR’s Jamie McMurray, Eric Jones and others. Jeremy Hood drove to third as Newman dropped to fourth ahead have last year’s Super Master winner Jerry Miller.

Joining Dolian and Welsh in the four-wins at Quincy club is Tony Neilson. A three-time winner last year, Neilson was able to defend one of his victories. Neilson fought with Welsh in the Yamaha Masters class. Welsh set fast time but fell down the order at the start of the main event. He would catch up and lead the majority of the race, until Neilson worked past on the final circuit for the victory. Pete Vetter was third with Keith Scharf fourth and Joey Gower fifth. 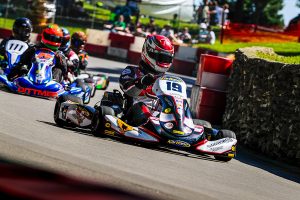 Gage Rucker grabbed his first victory at Quincy, winning the Yamaha Heavy division. Top qualifier Evan Stamer was unable to complete the opening lap, thus handing the top spot to Rucker. Gage led all 12 laps to establish a four-second advantage by the checkered flag for the victory. Michael Dittmer won the battle for second ahead of Cameron Parr with Shane Wells and Randy Porter completing the podium.

Joining the list of first time winners is Zach Schiff. A runner-up in last year’s exciting battle for the 125cc Shifter victory, Schiff was able to go wire-to-wire in the main event. Last year’s winner Joe Ruch set the quickest lap in qualifying to start the Saturday Sprint from pole position ahead of the 19-driver field. Ruch fell to third as Schiff grabbed the holeshot and led all eight laps. The race ended on lap two for Ruch, as the jump claimed another one with the 2018 winner going off course and out of the race. It was a frantic wire-to-wire victory for Schiff, the former Stars of Karting champion. On lap two, Schiff made hard contact with a barrier, bending the axle but continued on. The quickest driver of the race with a 1:00.783 was Tyler Sawyers, a lap nearly eight tenths quicker than the lap set by Ruch a year ago. After front row starter Devon Harden-Smith made contact with barriers on the opening lap, Sawyers and Jordan Johnson had to run down Schiff. Once there, Sawyers attempted to work past Schaff several times to no avail. Lap traffic provided more opportunities but with little passing zones available, Schiff was able to hold on through the final lap and score the victory. Sawyers settled for second while Johnson retired early. That promoted Phillip Smith to third with Ayden Fisher fourth and Cameron Parr completing the podium. 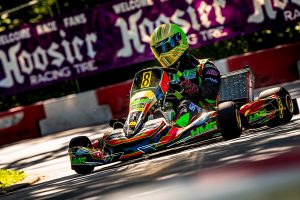 Schiff – “At the coolest venue and track, I had the best team support I could ask for. The HMG group and Evan Batt gave me a perfect kart to go contend for the win. Cannot thank them enough and everyone at the Quincy Grand Prix for making that race happen.”

Keith Freber – “The 34th running of the Quincy Grand Prix exceeded expectations across the board. Entries were up and Terry Traeder and his team put together the most professionally organized, promoted and executed kart race I have ever attended. The track is absolutely amazing to drive with a great flow that really rewards a driver who can get into a rhythm.  JT Miles and his track safety crew should be commended for their efforts to provide the racers with a safe course and the Quincy Parks Departments commitment to the event is amazing.  The commitment level of the entire city of Quincy is quite impressive with everyone from Mayor Kyle Moore all the way down to the many volunteers who work corners and traffic control clearly committed to the success of the event.  The Quincy Grand Prix is a great model for how the events should be done.  This is definitely one that should be on every karters ‘must-go’ list in 2020!” 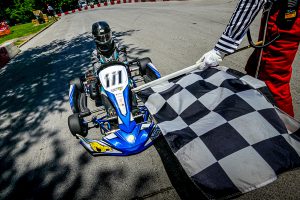 “Saturday was definitely the highlight of my career in karting.  To be inducted into the World Karting Association Hall of Fame came as a complete surprise. I am truly honored to have been recognized in this manner and to have Randy Kugler making the presentation and then receiving the award from my father just made it that much more special. I have been fortunate to work with a lot of great people over the last 35 years and this award is really reflective of their impact on me.  To join my grandfather Elmer (1987) and my father Don (2006) in the Hall of Fame is really amazing, it’s just hard to put into words how much this means. I’d like to thank WKA for this award and for all they do to continue to advance the sport.”

Another historic mark was the 34th Quincy Grand Prix for veteran karter Mike Birdsell. The 14-time Park winner made his 34th start, dating back to the inaugural event in 1970. His first victory came in 1972 in American Reed Light. Birdsell raced in Margay Ignite Senior and Masters on the weekend, with a best finish of 11th in the elder division. You can believe that Birdsell along with the many drivers in attendance will be part of the 35th edition in 2020!

Full results can be found on MyLaps.