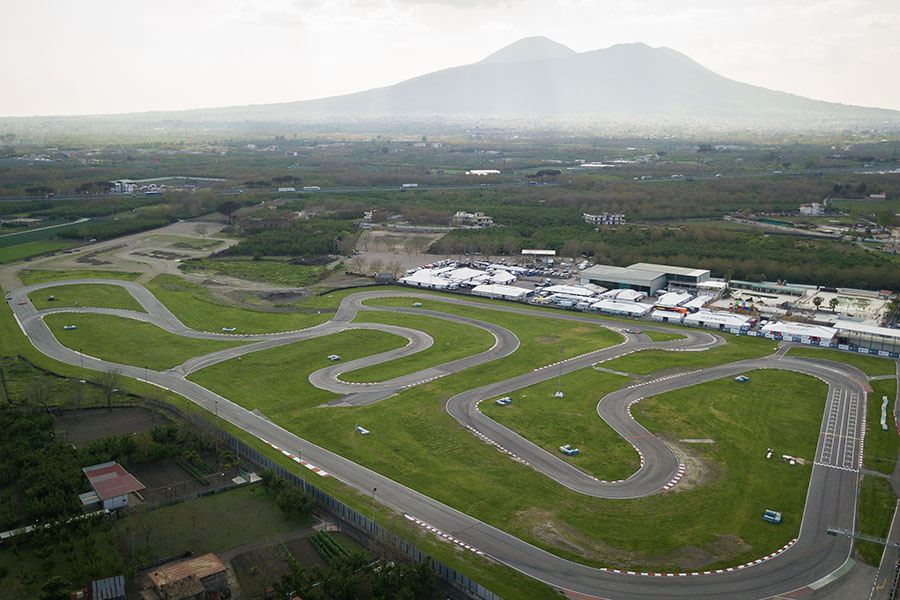 The Circuito Internazionale Napoli of Sarno is preparing to host the first Italian Kart Grand Prix from 14th to 16th June 2019. While the young Drivers of the FIA Karting Academy Trophy will be competing in the second of their three Competitions, the FIA Karting European Championship – KZ & KZ2 will finish at the foot of Vesuvius. Whatever happens, the return to Italy will be accompanied by different conditions conducive to spectacular Races.

The longest circuit of the season with its 1547m, Sarno is also the one with the longest fast sector. However, technicality is not lacking in the other sectors of the Neapolitan track and it always generates exciting sporting clashes. High temperatures are to be expected and the risk of rain is never completely absent in the Campania plain, under the eye of the volcano.

All conditions will be met to produce a suspenseful conclusion to the FIA Karting European Championship – KZ & KZ2 which started in Germany at the beginning of May. The titles will be awarded according to the sum of the points from the two Competitions, without any margin of error. In addition, Sarno will undoubtedly mark the turning point of the FIA Karting Academy Trophy decided over three Competitions. Experience has shown that the hierarchy can change greatly on such a circuit that often requires specific provisions. Early maturity could be decisive for the 51 young talents from 47 nations on five continents, competing on equal terms at the wheel of the one-design Exprit / Vortex / B’stone karts. Note that Bridgestone will supply the tyres for the three categories of the programme.

KZ: in pursuit of Abbasse

With his initial success in Wackersdorf (DEU), Anthony Abbasse (FRA) approaches the Italian Competition as the favourite. However, the KZ title is far from decided, especially as the Competition will held on a circuit frequently used by the main teams. Close behind, Matteo Vigano (ITA) will benefit from the support of prestigious team-mates such as Marco Ardigo (ITA) and Simo Puhakka (FIN), who are often very successful in Sarno. Alessandro Irlando (ITA) has a great card to play and Jorrit Pex (NLD) has better control over his new equipment. Finally, Bas Lammers (NLD) has always enjoyed the circuit of Sarno where he has already had the opportunity to shine. 25 Drivers have registered for this Competition.

Skaras the man to beat in KZ2

The victory of Emil Skaras (SWE) in Germany surprised a large proportion of his rivals. They are expected to react in Sarno, especially the three Italians who follow him in the provisional standings. Also surprising in Wackersdorf, Simone Cunati (ITA) remains a formidable rival for the title, while the very fast Riccardo Longhi (ITA) will try harder than ever to put his name in the European results. He is one of the biggest favourites, if luck stays with him. Giuseppe Palomba (ITA) proved that he could also fight for the win, while David Vidales Ajenjo (ESP) surprised by his comfort in a category he has recently joined. The list of 79 entries includes many Drivers capable of shining in Sarno. Without a great result on his home turf, Alexander Schmitz (DEU) is a perfect example, as are Lorenzo Giannoni (ITA) and Benjamin Tornqvist Persson (SWE).

Strong in a variety of conditions, Robert De Haan (NLD) impressed during the opening race of the 2019 FIA Karting Academy Trophy. His opponents must absolutely counter his domination to maintain their chances. Joshua Coertze (ZAF) and Magnus Germansen Daae (DNK) are in the best position to start the fight. Paolo Ferrari (ITA) is not lacking strong attributes, nor is Lucas Mendes (BRA) or Lucas Bohdanowicz (ARG). With the support of OTK Kart Group for Exprit chassis and Vortex engines, Bridgestone for tyres and OMP for apparel, the 51 Drivers entered will be able to express their talent freely and fairly in Sarno.

The Competition will be available on the official FIA Karting Championship app for iOS and Android mobile devices and at www.cikfia.com.