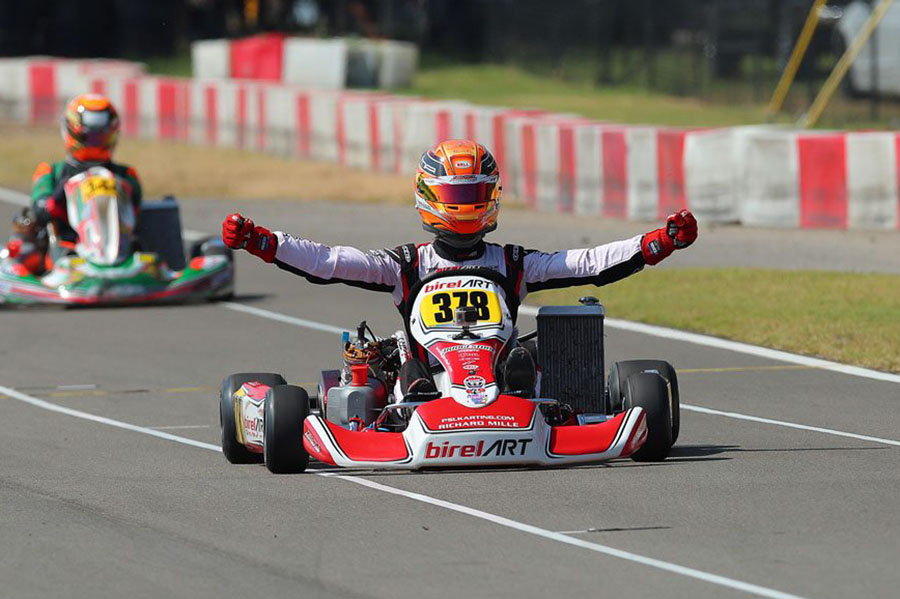 The first of two ROK Cup USA Festivals on the 2019 calendar was contested this weekend with 124 entries competing along the Gulf of Mexico. The Finishline Performance Karting facility in Biloxi, Mississippi hosted the Battle At The Beach on May 30 – June 2. Aside from battling a new race track, weather was a story all weekend with humid temperatures and rain playing havoc on the competitors. On the line, aside from unique-themed trophies, were tickets to the ROK Cup Superfinal in Italy and the ROK The RIO in Las Vegas later this season. 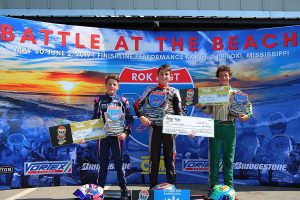 Three days of competition included a full day of practice on Thursday, with additional sessions on Friday before getting into qualifying and the first round of heat races. The three remaining heat races were contested on Saturday with the main events crowning the 11 winners Sunday. Victors in the Mini Rok, Junior Rok, Senior Rok, Masters Rok, Shifter Rok and Shifter Masters Rok received the ticket to the ROK Cup Superfinal at South Garda Karting facility in Lonato, Italy this October. The top-three in Micro Rok, Junior 100cc, and Senior 100cc, as well as the second and third place finishers in the above categories earned a ROK the RIO ticket, set for the Rio All-Suites Hotel & Casino in Las Vegas on October 28-November 2. Briggs class winners received a ROK the RIO entry as well as use of a Vortex VLR 100cc engine during the event.

Brazilian Arthur Leist (PSL / Birel ART) added his name to the list of drivers competing in Italy this October, winning the Senior Rok division. Leist was not at the top of the order for the majority of the weekend, hovering around the top-five through the heat races. Four different drivers won the heat races after Axel Cabrera (AKT / Kosmic) set fast time qualifying. Nicholas Hornbostel (REM / Kosmic), Florida Winter Tour champion Christian Brooks (Orsolon / Tony Kart), Canadian Thomas Nepveu (PSL / Birel ART), and Colby DuBato (LEM / Ricciardo) all took a win, as Brooks secured the best score through the four rounds to earn pole position for the Final. Leist started in third, and after Brooks paced the field for the first four laps, led the remainder of the 20-lap race for the victory. Brooks settled for second, set to join Leist in Italy thanks to his FWT title ticket. Diego Ramos (HRM / Tony Kart) put two Brazilians on the podium, climbing up four spots to third. Cabrera started second, dropping to fourth with Nepveu completing the top-five. 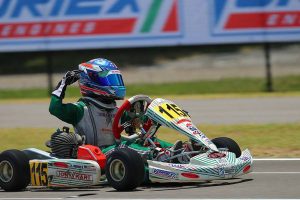 Two drivers fought it out in the Junior Rok division – Canadian Dale Curran (REM / Kosmic) and Florida Winter Tour champion Luca Mars (SCR / Tony Kart). Curran struck first in qualifying, clearing the 21-kart field by two tenths of a second. Mars won the opening two heat races until Curran came back to win the final two, handing him the pole position for the Final. Joey Atanasio (HRM / Tony Kart) joined the fight in the 20-lap main event, but in the end, Mars came out triumphant for the victory. Curran was second with Atanasio in third. Luke Lange (SCR / Tony Kart) climbed up four spots to fourth as teammate Kyffin Simpson held onto fifth.

The largest division of the weekend was Mini Rok with 23 drivers fighting for the top spot of the podium. No one driver really stood out throughout the weekend as the field was deep with talent. Like the Senior class, four different drivers won a heat race. Caleb Gafrarar (PSL / Birel ART) came from 15th to first in the opening heat race for the win while Sebastian Garzon (AM / Exprit), top qualifier Enzo Deligny (Supertune / Tony Kart), and Florida Winter Tour champion Kai Sorensen (Supertune / Tony Kart) all took a win. The two teammates filled the front row for the main event, with Deligny earning the pole position. Sorensen took over the lead from Deligny after two laps, and led the remainder of the 16-lap Final for the victory. Deligny fell down to fourth at the checkered flag as Liam Flanagan (Tanda / Praga) climbed up six spots to the runner-up position with Gafrarar up from 12th to third. A penalty for contact dropped Gafrarar to fifth in the final tally, moving Deligny to the podium and Michael Costello (Benik) to fourth. 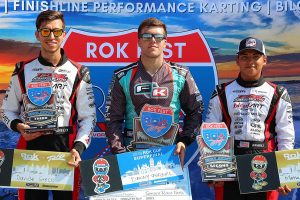 Danny Formal (LEM / Formula K) is set for another return to the Rok Cup Superfinal, winning the Shifter Senior Rok class. Formal opened up the event as the driver to beat, setting fast time in qualifying before winning the first two heats. An issue in Heat #3 put him down in 16th, placing sixth in Heat #4 to sit fifth on the main event grid. Canadian Davide Greco (PSL / Birel ART) won the third moto with teammate Mathias Ramirez taking the fourth, as they filled out the front row for the Final. Ramirez grabbed the holeshot and led the first six laps. That was all Formal needed to reclaim the top spot, showing the way for the remainder of the race for the victory. Ramirez and Greco completed the podium with Vincenzo Sarracino (TB Kart) in fourth and Rory van der Steur (TF / Tony Kart) up two spots to fifth.

Set to join him in Italy is Texan Ryan Kinnear (PGR / Ricciardo) after victory in the Shifter Master Rok division. Kinnear followed Formal’s lead, posting the quick time in qualifying prior to winning the opening two heats. Kinnear had an issue on-track that put him on the sidelines while fighting for the lead, and was only able to work up to sixth in Heat #4. Peter Licciardi (TB Kart) took over the top spot in those two heat races, earning the pole position for the main event with Kinnear on the outside of row one. Kinnear grabbed the holeshot and led wire-to-wire for the victory and ticket. Juan Ignacio Perez (HRM / Tony Kart) advanced up to second, dropping Licciardi down to third. Nathan Stewart ran fourth in his CRG debut with FWT champion Victor Jimenez (Crosslink / Tony Kart) in fifth. 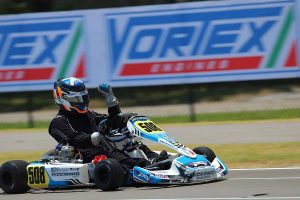 The victory in the Micro Swift was hard-fought between the youngest competitors at the event. Top qualifier Carson Weinberg (Nitro Kart) ended up coming through in the main event for the victory. Kai Johnson (Energy) won three of the four heat races and led the field to the green flag. He along with Weinberg and Oliver Wheldon (Kosmic) would lead at one point throughout the race until Weinberg pulled away at the end to claim the victory. Wheldon – son of the late Dan Wheldon – scored the second spot with Johnson ending up in third. 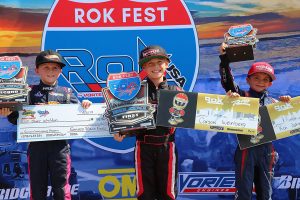 In total, 15 drivers competed in the Briggs 206 Senior and Junior categories. Alexander Searle scored the Senior victory over Dylan Amundsen and Zach Linsell for a MGM chassis sweep. Sam Corry (MGM) beat Granger Perra (Kosmic) to the line for the victory in Junior, with Camryn Reed (Ionic) joining them on the podium. Chloe Chambers (Kosmic) dominated the main event in the Junior 100cc class, driving away to a 18-second advantage over Reed (OTK) and Perra (OTK), who each earned their second podium finish on the weekend. Austin Osborne (Kosmic) ran uncontested in the Senior 100cc division.

Saturday evening, ROK Cup USA and the Finishline Performance Karting facility hosted an endurance event in the rental karts with a $750 prize to the winning team. The trio of Danny Formal, Jimmy Cabrera and Axel Cabrera took home the cash and honor of winning against the large field taking part.

During the weekend, ROK Cup USA announced the location for the second ROK Festival for the 2019 season. Labor Day weekend – August 30 to September 1 – will take competitors to the Amarillo Kart Circuit outside Amarillo, Texas. More details to follow as they become available.