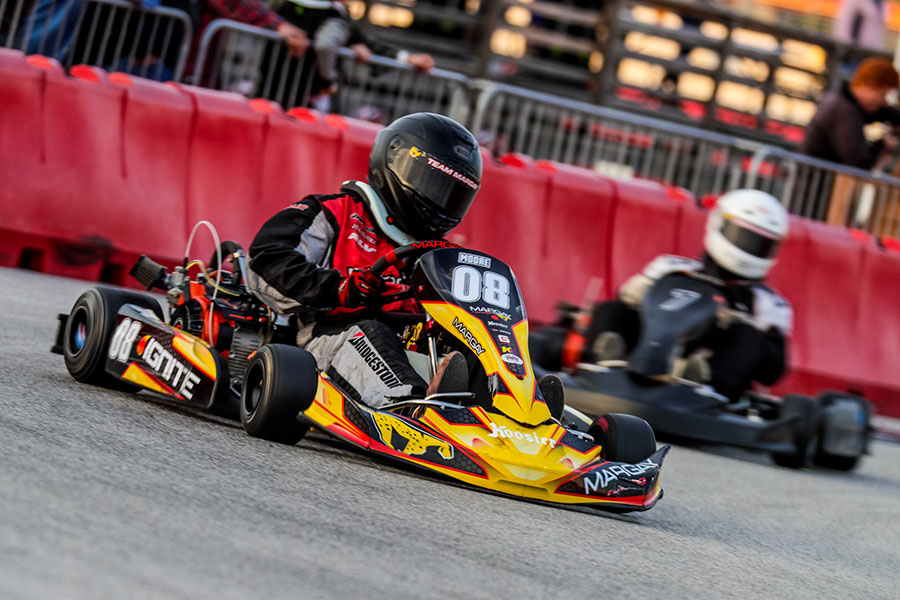 Ignite racing returned to action at the Gateway Kartplex last Saturday for double-header competition on the backwards configuration. The sun made its rare appearance for the event after weeks of consistent rainfall providing great racing action through the day. Prior to the event, Kartplex drivers and families paid tribute to fellow driver, Tom Newlon, who passed away after a long battle with cancer. His son, John Newlon, was able to secure two podium place finishes in Ignite heavy through the day in memory of his late father. 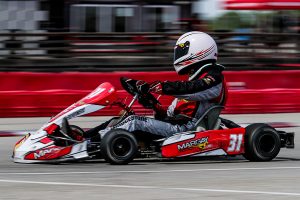 The dominant driver of the day proved to be Hunter Richardson, taking the feature victories in both round 3 and 4 in Ignite Senior. In the first feature, Richardson took a commanding victory over Avery Schwalm by 5.008 seconds after putting down consistent laps with no mistakes. In third place was Eric Loddeke who took the final step of the podium after an impressive battle with Ryan Bettenhausen and James Newbold. In the second feature, Richardson would once again take the victory by 3.776 seconds over second place Eric Loddeke and third place Matt Chubb.

In the Ignite Masters round 3 feature James Newbold would start the day on top after a pole and pre-final win. Brandin Moore and Micah Floretta would bring the heat in the final forming a 3-kart battle for the lead. On the final lap, Moore would make the over-under pass on the final turn, taking the victory over Newbold by 0.083 seconds. In the round 4 final, Newbold would earn the pole and lead the feature most of the way through. Once again, Moore would make a late-race stride and pass Newbold down the backstretch with 2 laps to go and eventually take the win by 0.571 seconds with Micah Floretta in third place.

The newly formed Ignite Heavy class would debut as a single run-group over the weekend. Although the smallest field, it proved to be one of the most exciting events of the day. In both events, it was a three-way battle for the lead between Greg Mefford, Craig Loddeke and John Newlon. All three would consistently trade the lead in both features but it was Craig Loddeke who would sweep the weekend’s events. 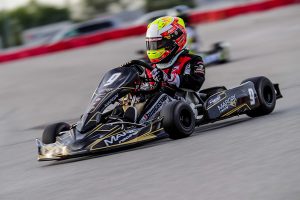 Reid Sweeney makes it four-for-four this season in Ignite Junior after dominant wins in Ignite Junior rounds 3-4. In round 3’s feature event, Sweeney was able gap the field and take the victory by 4.287 seconds over Trevor Eggemeyer with Carter Pryor rounding the podium in third place. In round 4, Eggemeyer and Pryor would close the gap making it a three-way battle up front for the lead. Eventually, Sweeney would come out victorious with a 1.612 second gap over Eggemeyer taking his second feature victory of the day.

2018 Ignite Rookie champion, Lane Mayer would earn his first wins of the year over the stacked rookie field. Showing experience, Mayer would take the round 3 victory over Race Beckman and Tyler Johnson by 8.921 seconds. In round 4’s feature event Mayer would take his second win of the day with Race Beckman 7.210 seconds behind and Quinn Ahrens rounding off the podium.

In Kid Karts, Gus Mayer would take the victory in both features, making it four wins in 2019. Andrew Hrbacek would finish the day with two second place finishes. Arthur Ionin and Ryan Bateman would round the podium in their respective features.