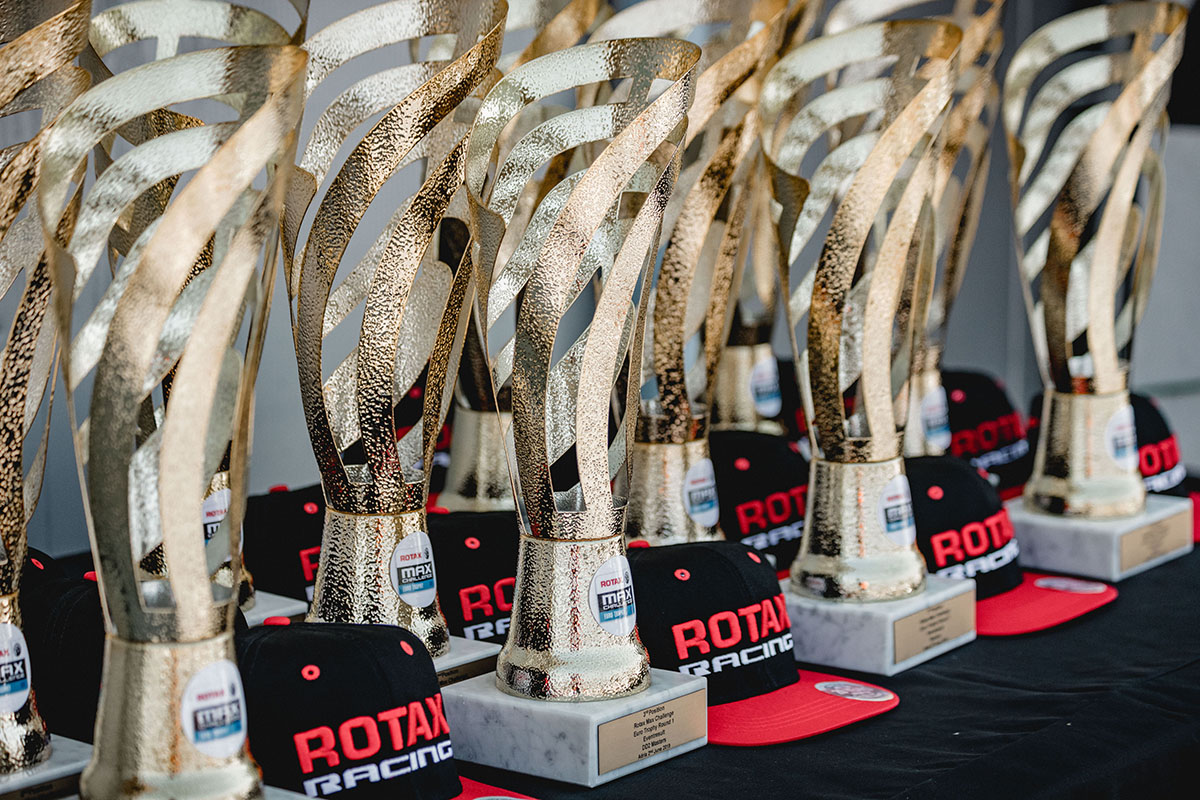 From May 31 to June 2, the waiting was finally over: The Rotax MAX Challenge Euro Trophy 2019 kicked off its second year. In April, the series had already given an impressive foretaste of the season with a successful Open race format at Genk, Belgium. Now, round one officially opened the championship in Italy. Therefore, the choice fell on the ultra-modern track of the Adria Karting Raceway not far from Venice.

The 1,302-metre long circuit is fast and challenging, even aside the tarmac, the modern and popular complex leaves nothing to be desired. So it was no surprise that 125 drivers entered for the first of three events of the official Rotax European Championship. The grids represented no less than 20 different nations, underlining the international claim of the Rotax MAX Challenge Euro Trophy, which will visit Kristianstad (SWE) and Wackersdorf (DEU) in the course of the year. The first showdown, which equally was a tribute to Austria’s two times Formula 1 World Champion Niki Lauda, who recently passed away, ended with four double winners. They were not only rewarded with trophies and a maximum of championship points, but an entry ticket for the newest edition on the Rotax racing calendar – the Rotax MAX Challenge International Trophy at Le Mans (FRA) in August as well.

Marcel Surmacz (KMS Europe) set the first benchmark for the weekend. In qualifying he drove a time of 51.045 seconds, putting himself in the prime positon for the heats. However, the youngster from Poland dropped back to third place following Saturday’s races, while the defending champion Mike van Vugt (JJ Racing) established himself at the top of the ranking.

From then on, the Dutchman, who had already won the RMC Euro Trophy Open at Genk, was unstoppable! He won both finals, thus securing the day’s victory impressively. Swedish driver Wilgot Edqvist (Strawberry Racing) prevailed as runner-up and Oli Pylka (Dan Holland Racing) from Poland took third place, with qualifying pole-sitter Marcel Surmacz finishing in a close fourth position.

With 51 participants, the seniors represented the biggest grid of the weekend. Already from qualifying practice, the field was extremely balanced with no less than 47 pilots separated by only one second. The outstanding driver was Ilian Bruynseels (Bouvin Power). The Belgian set the fastest lap with 50.011 seconds and a leading gap of only 0.062 seconds, which gave him pole position for his heats.

That afternoon, however, Mathilda Olsson (Strawberry Racing) made her way to the top. The fast Swede prevailed in both qualifying races securing the best chance for the decisive finals. And indeed, the Tony Kart pilot seized her opportunity to claim the victory: In the first final she won by a gap of over seven seconds over Rotax Euro Trophy Open winner Ilian Bruynseels and the Finn Lauri Leppae (Tony Kart). The action got even more exciting in the second final, in which the very competitive lady driver had to fight hard against her male opponents who were pushing from the lights. Ultimately, she fought back to the lead to remain unbeaten again – this time in front of the Frenchman Cesar Gazeau (Daems Racing Team) and the Brit Kai Hunter (Alonso) – to take the victory in the overall classification. Cesar Gazeau finished second on the podium, while Ilian Bruynseels was able to hang onto third place despite a time penalty for a jump start in Final 2.

On the Rotax DD2 grid, the close competition saw some great racing unfold amongst the field. After the Swiss driver Jan Schwitter (FM Racing) set the pace with a best time of 49.879 seconds in qualifying, the Austrian Nico Joerg (KSCA Sodi Austria Team) took the reins after the heats. But behind him, his teammate Jakub Bezel (KSCA Sodi Austria Team) heralded his coming, improving from fifth place in the qualifying to second place in the combined heats’ results merge.

And indeed, the Czechs’ momentum was not over yet! The Sodi driver was relentless in his campaign, eventually winning both finals, which boosted him right onto the top of the podium in the day standings. Behind him, his elder brother Petr Bezel (KSCA Sodi Austria Team) made it a doubly successful result for their family and the team of KSCA Sodi Austria. In third place, the Belgian Xander Przybylak (Bouvin Power) completed the podium. Nico Joerg, who had actually been on course for a podium position, missed out due a false start and the resulting time penalty. He had to settle for fourth place in the end.

Roberto Pesevski (KSCA Sodi Austria Team) dominated the event of the Rotax DD2 Masters pilots. Beginning with the qualifying, the Austrian showed the best pace, winning both heats and the two finals. In the ongoing race battles for positions right up to the checkered flag, the best supporting roles were played by the German Michael Becker (RS Competition) and the Belgian Christophe Adams (Team LA Putrel), who took the podium places in the mentioned order.

After the exciting first trial of strength, the Rotax MAX Challenge Euro Trophy is already looking forward to the next race weekend to reignite the highly-competitive international contest. For the upcoming event, the championship will go north from July 12-14. The Asum Ring of Kristianstad in Sweden will host the summer edition, which equally marks the halfway mark of the season. With a total of 7 tickets at stake for the prestigious Rotax MAX Challenge Grand Finals at Sarno (ITA) for the leading RMC Euro Trophy drivers in 2019, the quest for the title victories will definitely be an exciting weekend of racing.