Birel ART: Coluccio Back on the Podium in Sweden 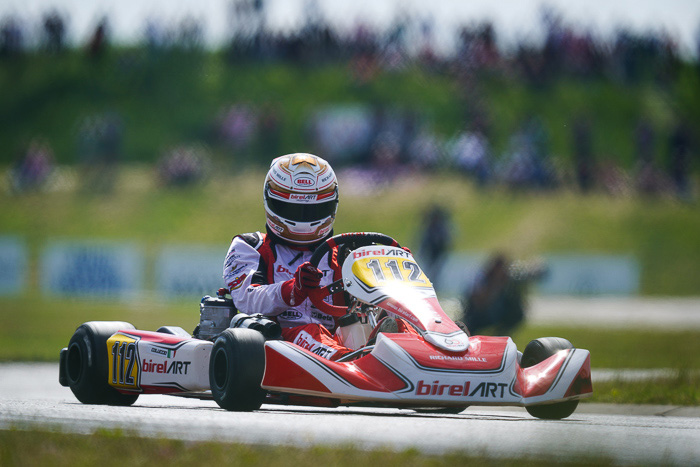 Already 3rd in the World Championship in OK in 2018 at the Kristianstad circuit, Luigi Coluccio and the Birel ART team have returned to the podium at the Swedish Kart Grand Prix, thanks to determination and great competitiveness. The Italian completed a magnificent attacking race to return to 3rd position after his start from 6th and took the opportunity to return to the top of the provisional ranking of the European Championship. There was also much satisfaction from the other drivers in the team.

The trends of the beginning of the season were confirmed during the third of the four events of the European Championships for OK and Junior, with an extremely elevated standard of competition, as well as a Birel ART team focused on the performance of its drivers. The Birel ART karts from the Italian factory adapted perfectly to the conditions of the Swedish track, which changed continuously over the course of the meeting.

“As soon as I arrived in Sweden, I had a very good feeling with the equipment,” commented Luigi. “I managed the 2nd fastest time of my group at the time, although I was disappointed that it only put me in 10th overall. I continued to attack hard during my five Qualifying Heats, winning twice. In the Final, the start of the race was difficult, the track was quite slippery. I gradually improved my position, finally climbing on the third step of the podium. I would really like to thank the team and the engine manufacturer, they have done a great job here in Kristianstad. It’s really encouraging for the second half of the season.”

Although Alex Irlando was unsuccessful after retiring early in the Final after a collision, Andrea Rosso was much talked about for his comeback. “This season Andrea is participating in the F4 Italian Championship and has managed to find a good feeling for his return to karting at this very high level of competition,” said Luca Filini, the team manager of the Birel ART Racing Team. “He got stronger, finishing 4th in his last heat and moving from 26th to 21st in the Final.”

Birel ART-TMs stand out among the 91 Juniors

The Racing Team, the Birel ART Junior Team and the “Richard Mille Young Talent Academy for Women” continued their work with the young drivers in the Junior category. Brazil’s Rafael Chaves Camara, Italy’s Cristian Bertuca and France’s Elliott Vayron continued to shine at the weekend. 8th in Qualifying and 11th after the heats, Chaves Camara was to regret the collision that occurred in the Final, forcing him into retirement. A penalty for Bertuca and a retirement for Vayron did not allow these two drivers to show their deserved level of performance in the Final but they continued their efforts regardless. Bertuca gained four places to finish 18th and Vayron 13 positions to finish 20th.

“We continue to support all our drivers in their progression,” added Luca Filini. “This time we are very happy with Luigi Coluccio’s podium. This is an excellent result for our Birel ART-TM karts. We are going to attack the final stretch of the European Championships with very high goals in KZ and KZ2 at Sarno in June, as well as in OK and Junior in July on the Le Mans circuit.”