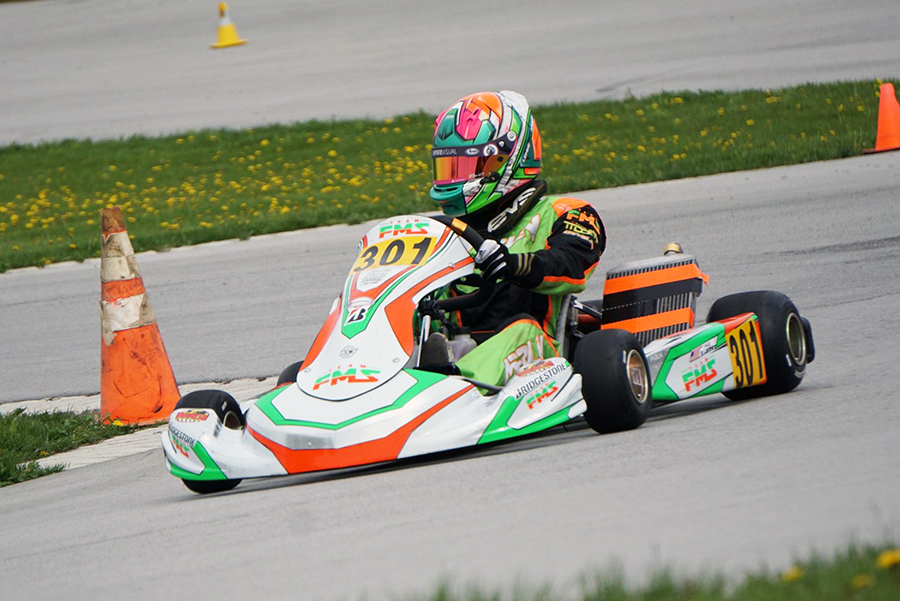 The third stop of the 2019 World Karting Association Bridgestone Manufacturers Cup Series program took competitors back to the CTECH Manufacturing Motorplex inside the famed Road America this past weekend. The Tillett Racing Seats Nationals at the Elkhart Lake, Wisconsin facility hosted Rounds 5 and 6 for all eight championship categories, with WKA returning to the circuit for the first time since 2010.

Weather was the major story throughout the weekend. Saturday ran with a threat of rain throughout the day after showers rolled through Friday evening, early Saturday morning. All of the sessions were contested on dry tires for Round 5 to completion. Officials cut the event short by one day, moving the Round 6 Finals to Saturday in advance of threatening severe weather rolling in on Sunday. 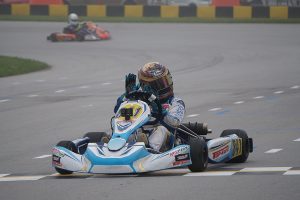 A total of four drivers left the ‘Cheese State’ with multiple main event victories. Leading the charge was IAME Senior championship leader Brandon Lemke (Franklin / Merlin). It was an almost sweep on the day, missing out on fast time in qualifying. Jake Venberg (Franklin / Kosmic) set fast time of 48.107 to edge out Lemke by over two tenths of a second. Lemke went on to win the Prefinal before earning victory in both main events, the first by four seconds and the Final 2 feature by over two seconds. Venberg was second in both races with Kyle Thome (Franklin / Merlin) completing the podium in third each time.

Adam Maxwell left Wisconsin with three victories overall, earning two in the KA100 Junior class. Maxwell (Top Kart USA) swept the action on Saturday in the category, beginning with fast time in qualifying while edging out Bryce Mersberger (Merlin) by 68 thousandths in the session. He followed it with wire-to-wire wins in the Prefinal and Final 1, ahead of James Overbeck (Nitro / Exprit) and Mersberger. Overbeck challenged Maxwell in Final 2, recording the fast lap of the race. Maxwell would triumph, however, in the 16-lap race, beating Overbeck to the line by four tenths of a second. Mersberger duplicated the podium, finishing third. 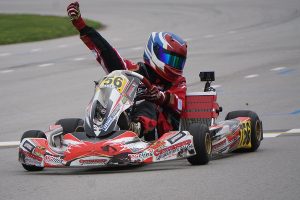 Maxwell had a sweep of Round 5 in the IAME Junior class by setting fast time and winning both Prefinal and Final. Hayden Jones (Nitro Kart) was second with Nathan Nicholson (Checkered / Tony Kart) placing third. Jones led the majority of Final 2, until Nicholson secure the lead with a few laps remaining, holding on for his first WKA victory. Jones finished second with Maxwell in third.

Ben Maier had one victory in two categories on the day. His first came in the Briggs 206 Cadet division, which welcomed 12 drivers. After missing out on the fast time in qualifying to Nitro Kart teammate Aryton Grim, Maier fended him off for the win in the Prefinal. Maier then led all 16 laps in Final 1 for the victory. Point leader Danny Dyszelski advanced up to second, edging out Christopher McKeithan for the spot at the checkered flag to give Nitro Kart a sweep of the podium. Maier led 15 of the 16 laps of Final 2, until Dyszelski was able to work past on the final circuit to steal the victory. Spencer Conrad gave Nitro Kart another sweep of the podium, placing third. 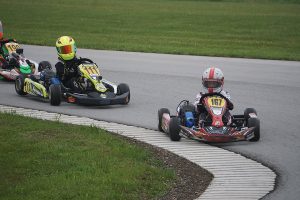 Maier’s second victory came in the competitive Mini Swift class. He and Adam Brickley dominated the event as they finished in the top spot throughout the day. Brickley (Nitro Kart) struck first, clearing the field by over two tenths in qualifying. The Prefinal was an epic battle with multiple leaders and lead changes, ending with Maier taking the race win. Maier and Brickley pulled away from the field in Final 1, with Brickley setting the pace in the second half and scoring the victory ahead of Maier. California driver Logan Toke (Top Kart) completed the podium. In Final 2, Maier was able to hold on after a late battle with Brickley to secure the victory. Cameron Brinkman (Franklin / Merlin) took advantage and stole second on the final circuit from Brickley.

Spencer Conrad (Nitro Kart), the EKN Driver of the Month for April 2019, added to his win total on the year with a sweep of the main events in Micro Swift. It was nearly a sweep of the event for Conrad in the largest category of the event with 14 drivers, missing out on fast time in qualifying to Indy Ragan (Nitro Kart). Conrad came from fifth on the grid to win the Prefinal. Another great race in Final 1 ended with Conrad working past Ava Hanssen (Merlin) for the victory. Hoyt Mohr (Nitro Kart) slipped past Hanssen for second, with the results still unofficial pending a review by the Board of Trustees. Conrad made it easier in Final 2, grabbing the lead early and holding on for the remainder of the 16-lap race. Mohr kept it close, placing runner-up with Hanssen in third. 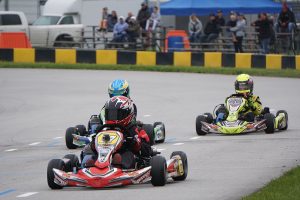 Spencer Conrad had the Micro Swift field chasing him at the end of both main event (Photo: Alissa Grim – WKA)

Alexander Kardashian and Brad Brittin – the two winners from Daytona – split the victories on the weekend in Wisconsin for KA100 Senior. Kardashian (Top Kart) set the pace in qualifying and led the entire Prefinal. Brittin (Franklin / Merlin) picked up the pace in Final 1, working past Kardashian for the victory on the final circuit. Stephen Dial (MilRock) was third in his first 2019 start. Kardashian drove away in Final 2, pulling out to a 1.4-second advantage over Brittin for his second victory of the year with Dial once again in third.

Holden Harder (Emmick) and Jacob Schaible (Emmick) split the victories in the Kid Kart division. Schaible set fast time in qualifying before Harder won the Prefinal and Final 1. Colton McQuade (Top Kart) slid past Schaible for second in the opening main event. Schaible triumphed in Final 2 after both Harder and McQuade retired while leading. Logan Kovalovsky and Jordon Pulchlopek (Praga) joined him on the podium. 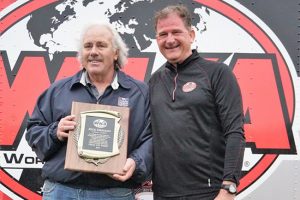