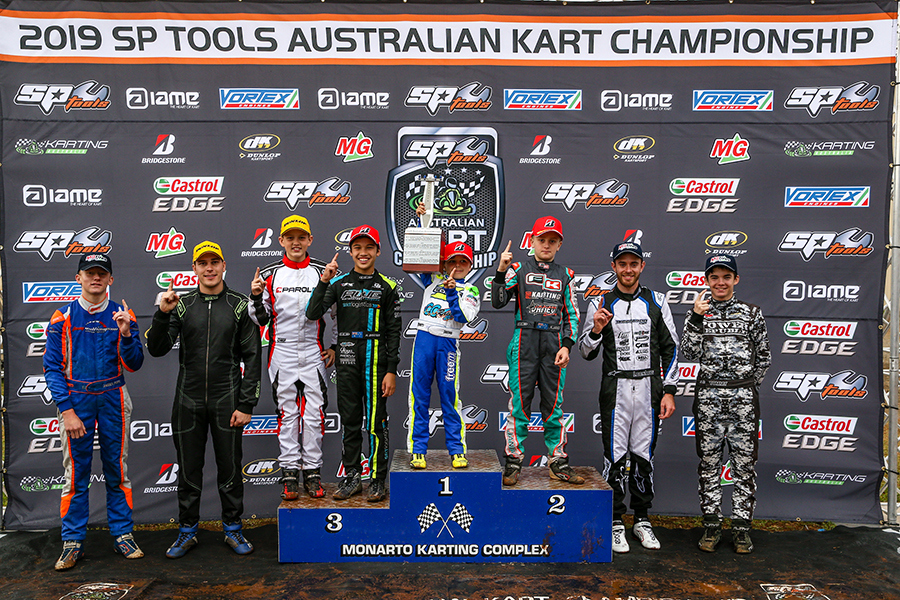 A number of first time winners have stood atop the podium at the third round of the SP Tools Australian Kart Championship, presented by Castrol EDGE at South Australia’s Monarto Karting Complex, just outside of Murray Bridge.

The Australian Championship broke the drought that has affected the Murray Bridge and surrounding areas over recent months at the worst possible time with rain beginning to fall right at the point of Finals on Sunday afternoon.

The conditions provided the platform for Jaxson Burns – a third generation racer and son of former Australian Champion, JasonBurns to take his first ever round win in Cadet 9 aboard his ZedCorse CompKart. After being uncharacteristically off the pace for much of the weekend, Burns used the conditions to his experience and pushed forward.

He got home in front of Championship leader coming into the weekend, James Anagnostiadis (Energy) and Cooper Stapleton.

Queensland Energy Kart driver, Ky Burke was on for a maximum pointscore until spinning out of the lead when Burns was challenging him at turn one, Burke however scored a strong haul of points to keep him in the mix heading to round four.

The second sub-Junior class Cadet 12 delivered a win for Victorian Formula K driver, Kristian Janev. His steady improvement over recent round has seen him rewarded with the victory – and in front of 60 fellow youngsters.

Arguably the toughest first time victory today came for Queenslander Tommy Cooper in TaG 125. The category took to the track in conditions after a rain shower causing much discussion around crews as to which tyres to fit. Cooper was one of a handful of drivers that chose to gamble on wet tyres – and the gamble paid off.

He did have to lap the majority of the 33 kart field that chose slick tyres, however did it without putting a wheel wrong. Completing the podium were fellow drivers that chose wets in Timothy Colombrita (CRG) and Brayden Taylor.

Pole-sitter Flynn Jackes elected to go with dry weather tyres, however the experiment didn’t pay off for him going off track at turn number one, nevertheless, Jackes can take plenty of heart from the weekend, which was arguably his strongest Australian Kart Championship outing.

Despite not having driven at the circuit in a KA2 kart prior to Friday’s practice, Parolin driver Ethan Feather completed the first time winners in the elite Junior category, in what was arguably the race of the day.

He got away from the start and built a sizeable lead and looked as though he was on target for an easy victory – William Seal had other ideas. The New South Wales-based DR Kart driver fought his way through the field and in the latter stages of the race snuck past round one winner, Luke Pink and set sail for Feather.

Seal passed Feather with half a lap to go before the irrepressible Parolin driver showed maturity beyond his years to fight straight back on his more seasoned opponent and crossed the line 0.077 of a second in front of Seal. Pink drove a smart race to bring his Praga home in third position and bank some solid Championship points.

Recently graduated Junior, Jaiden Pope took his first Senior AKC round victory, leading home a Tom Williamson Motorsport trifecta. Cameron Longmore led early before Pope got to the lead. He pulled away at the front while Longmore had his own battle with Marc Tulloch. Ultimately, Longmore snuck back past Tulloch to second – a position both held to the flag. Championship leader, Brad Jenner (Arrow) came home in fourth position.

In the other Championship categories, it was a case of front runners doubling up with round wins this season.

Troy Loeskow has finished no lower than second in the three finals this year and his Patrizicorse Ricciardo Kart took the win by over two seconds. He also secured a maximum of the 75 points that were on offer this weekend.

Garry Rogers Motorsport Virgin Australia Supercars Championship driver, James Golding had the perfect warmup for next weekend’s next round of the Championship through finishing second – his highest ever KZ2 AKC Championship round finish. He systematically picked his way through the field to end up second. He finished in front of the Championship leader coming into the event, SodiKart Australia’s Jason Faint.

The big story from the final though was BirelART’s Chris Hays, who made an unforced error at turn one off the start which saw the Gold Coaster at the rear of the field. He pushed forward and salvaged an eighth position after the 25 laps, however has vowed to come back stronger at the next round.

Former National Champion, Matthew Waters has made it two round wins in succession in KA3 Senior. The final was conducted in the worst of the conditions that swept the Monarto complex throughout the day. The rain that hit ahead of the first final conducted didn’t allow crews the ability to dial in a wet setup, effectively just strapping wet tyres to the karts and sending them out – and experience came to the fore.

In KA4 Junior, Hugh Barter scored his second round win of the season after what had been a challenging weekend for the AKC Motorsport Academy Praga driver. They too were faced with changeable conditions leaving drivers and crews alike questioning their decisions.

An early race scrap between Cody Maynes-Rutty and Joe Fawcett fell the way of Fawcett as Barter was pushing forward. He got to the front around the midway point of the race and then continued to pull away. He took the round win over Fawcett and first time podium visitor, Marcus Pisani.

Pole-sitter and current Australian Championship leader, Kobi Williams went the wrong way on setup and was shuffled down the order early, ultimately coming home in 20th position. The Victorian has maintained his Championship lead though by virtue of the heat race results recorded across the weekend.

The SP Tools Australian Kart Championship, presented by Castrol EDGE has pushed past its halfway point and with two rounds to go – there is plenty still to play for across all Championship categories.