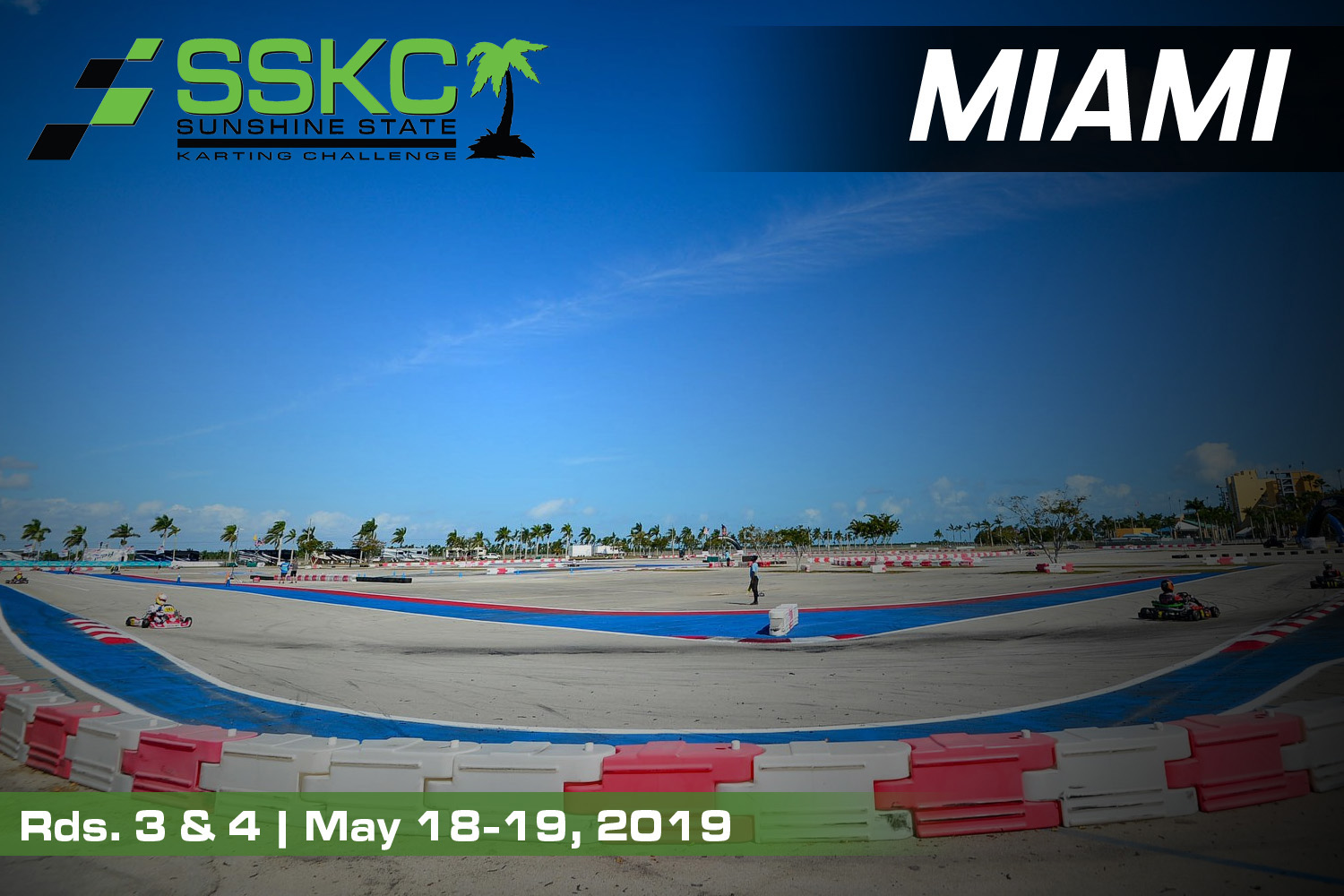 The 3rd and 4th Rounds of the 2019 Sunshine State Karting Challenge take racers back to the venue that hosted the series’s inaugural event in late Spring of 2018. The AMR Homestead-Miami Motorplex presented by MG Tires is an extremely physical circuit, clocking in at 7/10ths of a mile long with 12 corners.

The IAME Bambino class is split right down the middle in the championship chase, with Alessandro Truchot (BirelART / Pole Position) and Benja Fernandez (BirelART / VMotorsport) each taking a win on the opening weekend. Both drivers call AMR Motorplex home, so home track advantage will matter very little as they get set to duel once more.

Two drivers in the IAME Micro Swift division stood out in Ocala: Oliver Wheldon (Kosmic / JC Karting) and Enzo Vidmontiene (Benik). They are both on the entry list for Homestead and will undoubtedly be bringing their A-game. Anastasia Markovic (TB Kart) and Kai Johnson (Energy / AKT) both showed promise in the opening rounds as well, and they very well could be in the hunt come Saturday.

Although we’re missing a few drivers on the pre-entry list that should be in attendance, TB Kart USA team captain Farshad Bagheri (TB Kart) and Patrick Otto Madsen (Zanardi / ANSA) are both ready for action in the gearbox category.

Kyffin Simpson (Tony Kart / Speed Concepts Racing) was untouchable in the KA100 Junior class debut back in Ocala. However, he’s got a bigger and more experienced grid ready to do battle here in Homestead. Local drivers EJ Tamayo (Praga / DucTard) and Luke Welcome (Tony Kart) both have logged plenty of laps around the 7/10ths of a mile circuit, and they are primed for action this weekend.

While Colin Warren (VLR / TSRacing) did manage to stand on top of the box once again in Ocala, he far from dominated on the racetrack. Margay’s Hunter Fox (Margay) was able to match his pace in nearly every session, but some bad luck and other issues kept Fox from challenging for the win. When you add in local hotshoes Michel Garrido (Tony Kart) and Frankie Barroso (BirelART), the field gets even more interesting. It could very well be a large lead pack battling for the win by the time the main events are rolling for Round 3.

Almost all of the talent in the Briggs Heavy class from SSKC’s opening weekend have put their names back in the hat for weekend number two. Jorge Ruiz (TB Kart / JaM Racing) had a breakout weekend back in March, putting on his most dominating performance to date. The driver from Savannah, Georgia, is back this weekend in Miami.

He’s got a host of local talent stacked against him. Topping the list is a few drivers from the RYSA Racing camp, including the likes of Dan Breitenstein (BirelART / RYSA), Manny Sola (BirelART / RYSA), and Franco Cipullo (Praga / RYSA). With that said, there are still plenty of Central Florida drivers who could play spoiler with Neil Breitenbach (MGM), Gabe Kuret (Tony Kart), and more filling up the rest of the entry list.

With two frontrunners from the opening weekend absent from the pre-entry grid, Miguel Costa (Parolin / MC Racing), Jorge Ortiz (Tony Kart / SuperTune USA), and Max Garcia (Kart Republic / KartSport) now find themselves on the top of the championship standings. However, that doesn’t mean the series’s stop in Homestead will see just the three of them up front. Jakub Kolar (Formula K / DucTard Racing) is always stellar when it comes to defending his home turf, and JC Karting’s Sebastian Wheldon (Kosmic / JC Karting) has been picking up steam lately as well.

Colin Warren (TB Kart) and Brandon Simeone (Kart Republic) each came away from Ocala with a main event win under their belt. They should come in as the early favorites in the TaG Senior division, but Miami drivers Jack Copeland (BirelART / RYSA) and Joshua Wright (BirelART / RYSA) have both been quite fast as of late. There should still be a few additions to the grid before racing gets underway on Saturday, as the TaG Senior division in Florida continues its rebirth.

Once again, the highest entry total comes in the IAME X30 Junior division. Zanella Racing’s Jeremy Fletcher (Tony Kart / Zanella Racing) put on one heck of a showing in Ocala. However, as the series heads south, so does Fletcher’s hometrack advantage. Now, home territory falls in favor of the likes of Lucas Rodriguez (Kart Republic / KartSport), Leonardo Hassan (Tony Kart / MedStep), and 2018 TaG Junior Champion Alessandro de Tullio (Exprit / AM). The stacked field of 15+ drivers is no joke, and guessing a winner will be far from easy.