Nitro Kart driver gaining momentum during first half of season 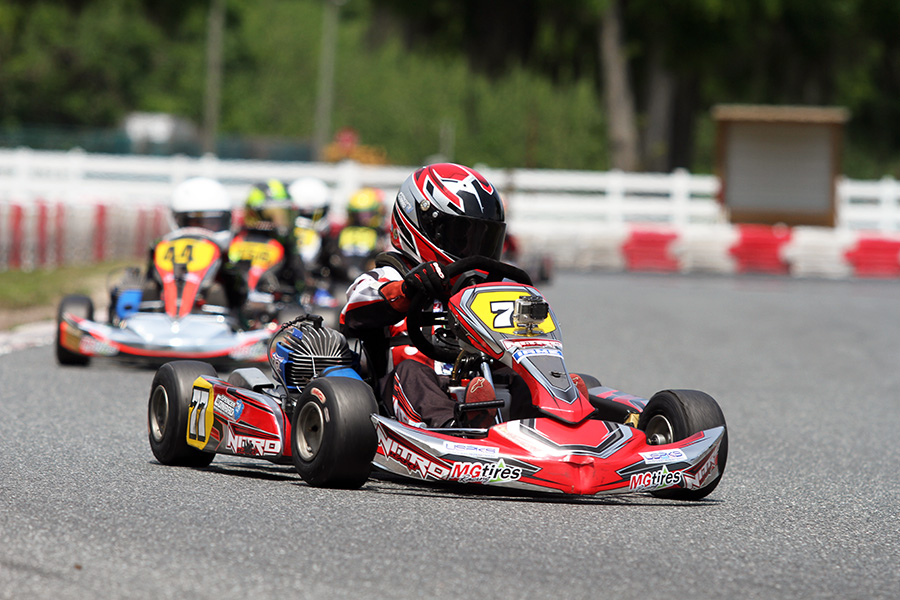 The first third of the 2019 season is now in the books with the month of April completed, and we are into the famed month of May. It was a busy four months to begin the year, with events covering both coasts, and now, the bulk of the summer programs well underway. April was the beginning for many, including the seventh season of the United States Pro Kart Series. For a second season, the series began with the Southern Grand Prix, held at the Ocala Gran Prix facility in central Florida. The April 5-7 weekend was the largest event for the program since 2015. A number of drivers from the Micro Swift category have graduated up to Mini, providing space for new names to shine in 2019. Among the first to stand out is Nitro Kart driver Spencer Conrad, coming away with two victories at the USPKS opener.

Conrad began karting at the dirt oval track, racing kid karts before moving to sprint tracks and the Cadet level, calling the GoPro Motorplex home. In December 2017, Spencer competed at the WKA National Road Racing Series event during the Daytona KartWeek, racing in the Cadet LO206 division. Conrad won the opening race and second in the Day 2 race. The second sprint track he competed at was the New Castle Motorsports Park before traveling to the Superkarts! USA SuperNationals 22 in Las Vegas. Spencer started the main event in 11th but was out after an opening lap incident that put him on the sidelines.

The USPKS 2019 opener was Conrad’s first visit to the Ocala Gran Prix. Spencer began the event by setting the pace in qualifying with a 41.329-lap to clear the 17-kart field. After leading the first seven laps of the Prefinal, Conrad fell back to tail of the lead group, finishing the 16-lap race in fourth. He made quick work of the three drivers starting in front of him, moving up to the lead by lap four. Conrad extended his lead over the next 20 laps, earning his first career USPKS victory by nearly five seconds.

Sunday began with Conrad coming up 24 thousandths short of setting fast time in qualifying, with Texas driver Jack Iliffe recording the quickest lap of the session. Spencer found himself back in sixth after the opening lap of the Prefinal, and was able to get himself back up to fourth with the fast lap of the race. The Final provided some great racing at the front with the leaders exchanging the lead several times. Conrad was among them, and secured the top spot by the halfway point. From there, Spencer drove away with fast laps of the race to a 2.7-second victory to sweep the main events on the weekend.

Conrad left the event as the championship leaders in the USPKS Micro Swift category, leading by 34 points. The second event of the program is scheduled for June 14-16 with the Carolina Grand Prix set for the GoPro Motorplex in Mooresville, North Carolina. 2019 has been strong for Conrad, opening up the season with two victories at the WKA Manufacturers Cup Series program. Spencer won at Daytona and GoPro, placing runner-up in the other two main events, to put himself as the current championship leader in the Micro Swift class. He heads to the third event of the program, scheduled for the CTECH Manufacturing Motorplex at Road America in Elkhart Lake, Wisconsin this weekend. Conrad is also second in the Briggs 206 Cadet standings with a best finish of runner-up at GoPro. Spencer will continue racing at the GoPro Karting Challenge and is set on returning to the SKUSA SuperNationials this November. 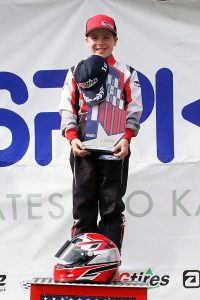 Chassis: Nitro Karting
Engine/Engine Builder: Swift / Cadet Technology Group; Briggs / Kart City Performance
Sponsors: Conrad’s Climate Control
Series You Compete In: WKA, USPKS, GoPro Motorplex Karting Challenge, and SKUSA
Years Karting: 5
How did you get started in karting? My Dad brought my brother and I to a local race, then the next week we were buying karts.
What has been the high point in your racing career? Winning two main events in one weekend at the USPKS race in Ocala.
What are your goals in racing? Driving at a professional level.
In a few words, how would you describe your driving style? Clean, confident, and aggressive
Funniest moment at the race track? My friend Hunter and I put a walkie talkie in the bathroom. When people went inside, we talked to them while they used the rest room.

What do you do when not at the track? Basketball, Soccer, Golf, Dirt bikes and 4 wheelers
What are your goals outside of karting? Get good grades
What app or game do you play right now? NBA 2k19
What type of street car would you like to drive? Jacked up truck
What are your pet peeves or things that irritate you? When my brother picks with me
What do you think could be done to improve the sport of karting? Work to bring more attention to the sport to get more people interested. Maybe by televising or streaming live events.
What are your favorite aspects about the sport of karting? Racing new people, making new friends, and having fun with them.