Energy Corse: Winner and Leader of the KZ2 European Championship 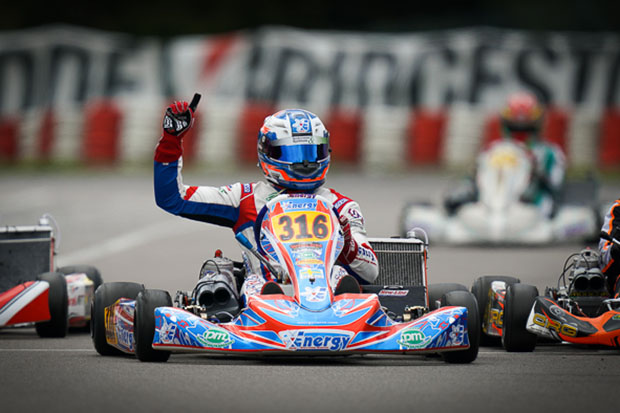 In the wake of an already very successful start to the season, the Energy Corse team has taken podiums in different categories and competitions: WSK, Andrea Margutti Trophy, National Championships, as well as in FIA Karting. At Wackersdorf in the German Kart Grand Prix, Emil Skaras led the KZ2 Final from start to finish with an Energy Corse-TM package more effective than ever before. The Swedish driver is now a strong leader of the European Championship!

Already noticed in 2018 and more recently in the WSK Euro Series at Sarno, Emil Skaras raised the colours of Energy Corse to the top of international karting, triumphing with panache during the first round of the KZ2 European Championship. “I am pleased to see that all the development work done this winter on the equipment continues to bear fruit,” said Mick Panigada, Energy Corse’s team. “With Emil Skaras in KZ2, Robert De Haan in OK-Junior and Alex Powell in 60 Mini in particular, podiums are frequent and confirm that we have a technical package at the top level and brilliant technicians in our structure.”

It is true that Energy Corse has one of the best records in the category and that the Italian chassis remains a benchmark in KZ2. Emil Skaras made a brilliant demonstration of this in Germany. A strong 2nd in the heats with three wins, he made the best start in the Final and no one managed to dislodge him from 1st place. On the podium, the Swede savoured his victory with his team manager!

In addition to his dominance during the first of the three FIA ​​Karting Academy Trophy events (victories in the Final and in all three heats with four fastest laps!), this season Robert De Haan is one of the main players in the OK-Junior pack. The Dutchman leads the WSK Euro Series after a 2nd place finish in the Prefinal and 4th in the Final at Sarno, then another 2nd place in the Prefinal and the same P2 in the Final at Angerville. In addition, he mounted the second step of the podium at the opening of the French Championship! He was also at the forefront of the European Championship, before running out of luck. Russia’s Maksim Soldatov has also made a name for himself on a number of occasions, while the Energy Corse team continues to support the progression of Marcos Flack and Connor Zilisch.

As Alex Powell continues to fight for the podium, the Energy Corse chassis are ubiquitous in the leading pack in the category of young drivers. Kirill Kutskov, Dmitriy Matveev, German Foteev, Vladimir Verkholantsev, Alexander Plotnikov, Yaroslav Trukhin, Marcus Saeter (ASD Revolution Motorsport) and Rui Chi Zhen were prominent in the WSK Promotion series. As for Powell, he won at La Conca in the WSK Super Master Series, which ended with a magnificent 3rd place overall for the Jamaican, out of a total of 137 drivers classified!

The excellent organisational work done by Energy Russia Niracing has been rewarded with many successes in the Russian Championship. In the first event, Team Akopov enabled Skulanov to win in Mini and Mateev to win in Super Mini, while Plotnikov (SilverRain team) was 3rd in the Super Mini category. The Energy Corse chassis won again in the second round of the Championship. In Super Mini, Batyta (Prima Racing team) won ahead of Mateev (Akopov team). And in Mini, Skulanov won again with team Akopov, who also placed Dzitiev on the third step of the podium.

Without doubt, Energy Power is still fully charged in 2019!