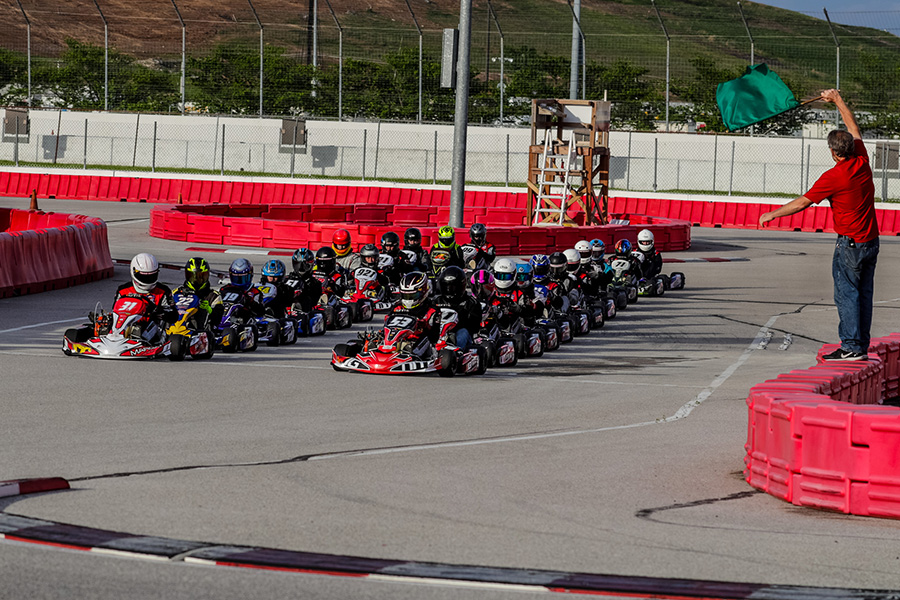 Last Saturday marked the 50th Ignite Series race in Gateway Kartplex’s history, starting back with their first event in the Fall of 2014. In honor of the 50th event, the field was challenged with 25 lap features and standing starts on Gateway’s “no-chicane” layout. St. Louis’s premier karting complex was welcomed with a record turnout of 72 entries across 6 classes. 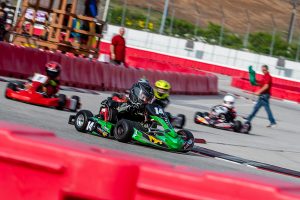 Absent from round 1, Evan Stamer would make his return to Ignite Series competition, claiming the pole with a lap time of 34.092 seconds, 0.149 ahead of second place Hunter Richardson and the 26 kart field. Last week’s winner Eric Loddeke would start third just behind the pair. With a standing start, Stamer would get the jump into turn 1 with Loddeke falling back into fifth place. Scott McClendon Jr. and Hailey Todtenhaupt would file into the third and fourth positions.

As the race went on, Richardson and Stamer would work together to gap the field. On lap 10 of the race the red flag comes out for an incident in turn 2, bunching the field back up for a restart. With the restart, Loddeke would make up ground and work his way to a podium spot. During the battle for third, Stamer and Richardson would once again gap the pack. With ten to go, the top two would create a healthy lead which meant the battle would commence. Both drivers would trade the lead on 13 times in the duration of the event. At the checkered it was 2018 Ignite Senior champion, Evan Stamer taking the win by 0.107 seconds over Richardson. 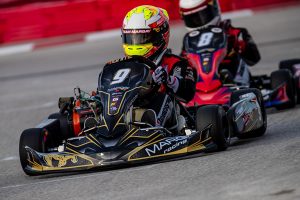 In the combined Ignite Masters/Heavy class, last week’s winner Brandin Moore would take the Ignite Masters pole with a lap time of 34.573 seconds. The Ignite Heavy pole was taken by Craig Loddeke starting 3rd overall after setting a flyer at 35.008 seconds. In the Ignite Masters race it was a three-way battle between Moore, James Newbold and Ryan Bettenhausen. After an incident with lapped traffic, Newbold would take the lead while Moore and Bettehhausen battled for the remaining podium positions. At the conclusion, it was Newbold taking the top spot in masters and Craig Loddeke winning Ignite Heavy.

2018 Briggs 206 Junior SuperComp champion, Trevor Eggemeyer, would set the fast lap in qualifying and take the pole over last week’s winner, Reid Sweeney with a lap of 34.553. Eggemeyer would take the lead on the start of the 25-lap feature with Sweeney hot on his tail. On the 5th lap, Sweeney would make the daring pass and begin the gap on Eggemeyer. At the end, it was Sweeney who would take the win, 3.479 seconds ahead of Eggemeyer and third place Carter Pryor. 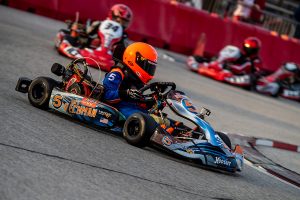 In qualifying, Isaac Wells would take the pole with a 36.012 second lap separating the top 3 drivers by less than a tenth. At the start of the feature, Wells would take the lead with Race Beckman close behind. On lap 7, Beckman would navigate his way around Wells through lap traffic. Wells, struggling to get around traffic would allow Lane Mayer and Owen Elders to get around him. Elders would then come from fourth to make another move around Mayer for the second-place position. Mayer and Wells would set fast lap after fast lap to close the race but it was Beckman and Elders who proved to navigate through traffic the best to take the top two spots. At the end of the day, Beckman would take the win with Elders and Mayer rounding the podium.

In Kid Karts, it was another win from “green” Gus Mayer taking the victory over Arthur Ionin by 25.381 seconds in the 5-kart field. Max Pryor would complete the podium