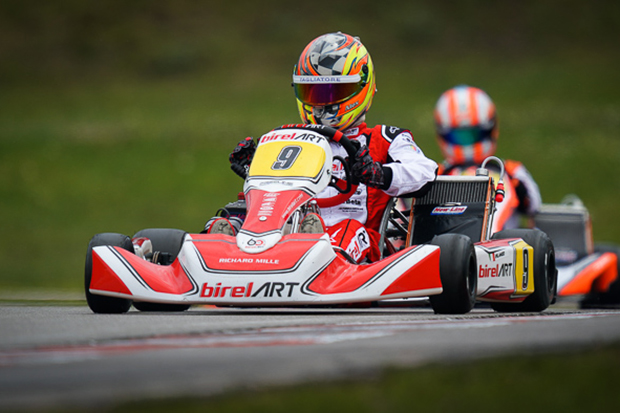 The first round of the FIA Karting European Championships – KZ and KZ2 started well for the Birel ART brand, which confirms the quality of its products more than ever in the categories using with 125cc gearbox engines. Impressive throughout the weekend in KZ, Alex Irlando was rewarded for his attacking race with the third step of the podium. In KZ2, Riccardo Longhi remained in the limelight throughout the Final, making an incredible comeback from 13th to 3rd place. The two European titles appear to be within the reach of the official Birel ART team in 2019.

The competition began with Alex Irlando’s and Marijn Kremers’ 3rd and 6th Qualifying times respectively, both less than one-tenth from pole position. Kremers had a fastest lap in one heat, but was sanctioned for his spoiler in the next race, losing valuable points. In the Final, the Dutchman had the fastest time among the frontrunners, but he had to be satisfied with 8th position. For his part, Alex Irlando had a great start from the second row on the outside and was set to play a major role at the front. After his efforts, he mounted the third step of the podium, after an excellent drive in the European Championship.

KZ2: Longhi the sensation of the weekend

More than ever, the red and white colours of the Birel ART brand shone during this opening of the European Championship. With pole position, Riccardo Longhi was certainly one of the heroes of the meeting. Winner of two heats and twice 2nd, the Italian unfortunately dropped out in another, which strongly penalised him in the cumulative rankings. Thanks to an all-out attack and an incredible pace, Riccardo was able to pass many rivals to secure 3rd place. “When I see how fast I was able to get back to the leading pair, I think I could have won with one or two more laps. In June at Sarno, the goal will be to take the title, I know that I am capable, especially as I can count on my fantastic Birel ART-TM,” said Riccardo Longhi at the finish.

After the German Kart Grand Prix at Wackersdorf, the Team Manager of Birel ART Luca Filini did not hide his satisfaction after the fantastic performances of his drivers…

“The team did a remarkable job. I am happy to see that all our KZ2 drivers reached the Final despite the high number of entries and the difficult weather conditions on Saturday. This is proof that the performance was there, but also that we have been able to adapt to the situation. I congratulate Riccardo Longhi, Pierre Loubère, in the points in the Final, Alexander Dahlberg, who won a heat before finishing 11th in the Final, and Leonardo Marseglia. The latter is young, he has arrived from OK and has already managed to finish 2nd in a heat. He has yet to gain experience, but he is promising. As for Longhi, everyone could see that he was the fastest of the whole meeting. It’s a pity he took maximum points in a heat. Finishing 3rd in the Final after starting 13th, is a great achievement. I also congratulate the engine manufacturers with whom we collaborate, as well as the drivers and teams who use the Birel ART chassis, such as KSW, Solgat Motorsport, Joka Racing and Renda Motorsport.”