This weekend marks the 10th edition of the Superkarts! USA Pro Tour SpringNationals. The event is set for May 3-5 at the Utah Motorsports Campus as SKUSA returns to the Erda, Utah facility for the second time in series history. Formerly known as Miller Motorsports Park, SKUSA first visited the facility outside Salt Lake City back in July 2012 for the SummerNationals that year. The 9/10-mile Alan Wilson-designed karting circuit is named ‘Star Trek’, which will be contested in the clockwise direction – the opposite of the 2012 visit.

eKartingNews.com remains the official online partner for the SKUSA Pro Tour, having broadcast every race since its inception. Those karting enthusiasts not in attendance can listen from home or on the road to the EKN Live broadcast page at www.ekartingnews.com/live with EKN’s own Rob Howden providing the play-by-play call. This weekend’s broadcast is brought to you by Mad Old Nut Racing, Rolison Performance Group and Courtney Concepts. Daily reports and updates on the EKN Social Media network will fill up your timeline throughout the weekend.

The opening event of the 2019 Superkarts! USA Pro Tour took place at the beginning of March with the WinterNationals contested at the CalSpeed Karting facility in Fontana, California. Competitors battled wet weather all weekend to decide the winners in the opening two rounds of the series. Now, drivers hope for perfect racing conditions at over 4,300 feet above sea level.

The first of two previews looks at all the shifterkart divisions along with the Master categories. 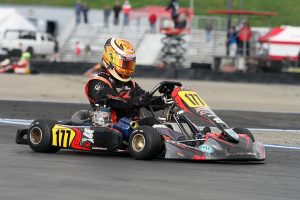 The IAME SSE 175cc powerplant made its debut at the SKUSA Pro Tour WinterNationals with two different drivers claiming victory. Andrew Bujdoso mastered the rain on Saturday to claim his first SKUSA Pro Tour victory while defending champion AJ Myers triumphed on Sunday. It was a Croc Promotion sweep of the victories thanks to Bujdoso and Myers, however, the roster has changed for Mad Old Nut Racing operation. Bujdoso remains, entering the SpringNationals as the championship leader by 10 points over Myers, who becomes a former teammate. Myers was released from his spot at MONR and has joined CRG Nordam, making his debut with the team this weekend. Myers brings with him the SKUSA #1 plate, joining SKUSA #2 plate holder Kyle Wick under the CRG Nordam banner, who sits third in the championship chase heading into Utah. Completing the silly season between races, Myers spot at Croc Promotion USA was filled by 2017 SKUSA Pro Tour champion Jake French. The Texan has spent the last month testing and racing with the team, and makes his return to the SKUSA Pro Tour this weekend.

Only four drivers stood on the podium in Fontana, including Bujdoso, Myers and Wick. Rory van der Steur (MRC / Tony Kart) placed third in the wet, and sits fourth in the standings. A major story at the WinterNats was the lack of main event performance by three-time SuperNationals winner Billy Musgrave (MRC / Aluminos). Following a P4 effort Saturday, Musgrave was a DNF on Sunday, and trails Bujdoso by 110 points going into the weekend. Throw in the always-quick Mathias Ramirez (PSL / Birel ART), returning champion Joey Wimsett (DRT / DR Kart), and emerging star Prescott Campbell (MRC / Aluminos), Utah is shaping up to be an exciting weekend. 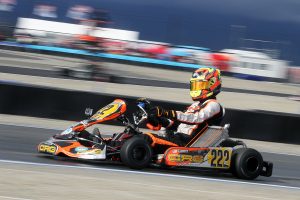 Max Hewitt is the driver to beat in the Pro Shifter 2 division (Photo: EKN)

Two drivers stood out in the Pro Shifter 2 category at the WinterNationals. Race Liberante (J3 / CompKart) scored his first SKUSA Pro Tour victory with a stellar performance in the wet on Saturday. He was on his way to another victory in the dry on Sunday until contact took him out of contention. That promoted Max Hewitt (CRG Nordam) to the top of the podium, with the Texan leading the championship as they head into the SpringNats. Liberante trails by just 13 points despite the DNF in Round Two. Calvin Ming (MRC / Aluminos) sits third in the standings thanks to a third-place finish in Round One in his Pro Shifter 2 debut, needing to better both Hewitt and Liberante on the weekend in order to put himself into the championship chase. 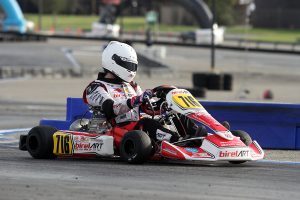 Jordon Musser takes his near perfect score in G1 to Utah (Photo: EKN)

The 2019 season has been perfect for three-time SKUSA champion Jordon Musser in the new G1 Gladiator division. Musser (3G / Birel ART) has not been beaten in all track sessions with the new IAME SSE 175cc powerplant, including the four rounds of the SKUSA Winter Series and two days at the SKUSA WinterNationals. Musser brings his perfect score in Utah, with the same challengers from Fontana. John Crow (MRC / Aluminos) was the best challenger, taking the lead from Musser in the Round Two Final, unable to close the deal. He along with Round One runner-up Dan Monteiro (RPG / Kosmic) and Justin Peck (RPG / Kosmic) return. Utah driver Ryan Pool (MSquared / Kosmic) won the S4 division at the 2012 SummerNationals at his home track, and vying for the same in his G1 debut. 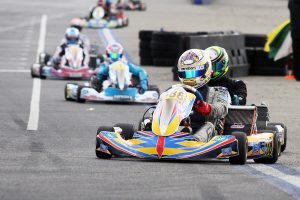 Derek Wang continues his bid for a third title in X30 Master heading into Utah as point leader (Photo: EKN)

Two-time X30 Master champion Derek Wang missed out on a third straight X30 Master title last year, finishing outside the top-three. Wang (Crosslink / Tony Kart) is vying to rekindle that streak as the multi-time Team USA driver left Fontana with the championship lead in the category. The advantage is 45 points over Round One victor Vatche Tatikian, who finally grabbed that elusive win. His Phil Giebler Racing / Ricciardo teammate Jess Peterson finished third in both races and sits in the same position in the title chase. The Round Two victory was provisionally Matt Johnson’s, but a pushback bumper penalty took that win away. Johnson (Nash / FA Kart) won the TaG Senior division back in the 2012 SKUSA visit to Utah, looking to add to his win total and put himself back into championship contention. 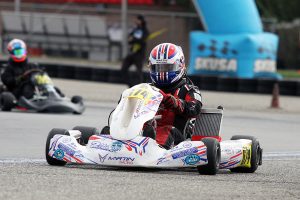 The X30 Super Master made its debut on the SKUSA Pro Tour at the WinterNationals. Steve Martin (2Wild / Tony Kart) was the first victor with Jon Persing (Nash / FA Kart) earning the second victory. Martin and DJ Ortiz (KRS / Tony Kart) are locked up for the top spot in the standings with Persing 10 points back in third. Local driver John Ruess (Kosmic) completes the roster on the weekend. 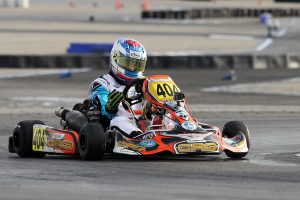 All three drivers that contested the S4 Master Stock Moto division at the WinterNationals return for the SpringNationals. Brett Harrelson (Nash / CRG) won both races in Fontana, and leads the championship chase over Ken Schilling (Aluminos) and Miguel Garcia (SodiKart).