WSK Euro Series: Battles All the Way to the Flag in Angerville 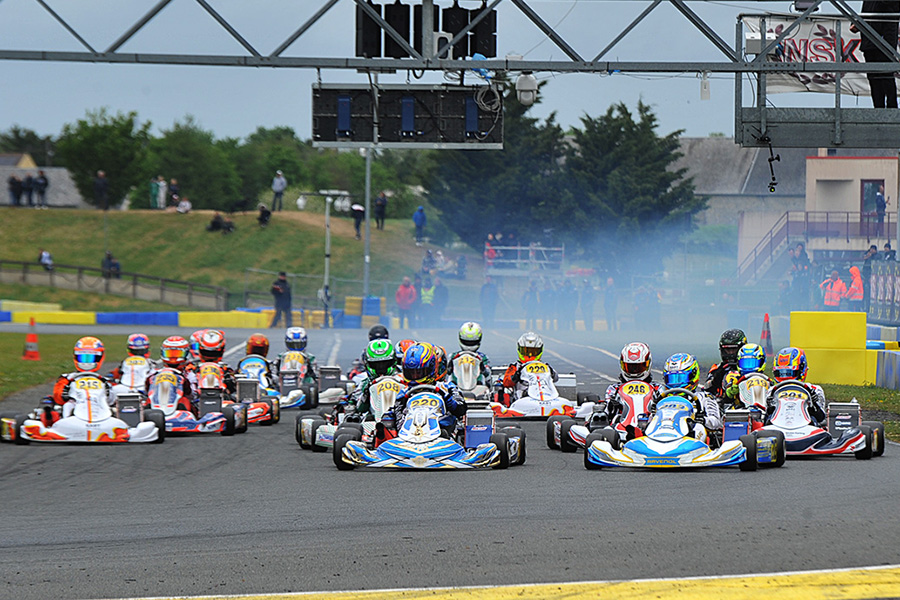 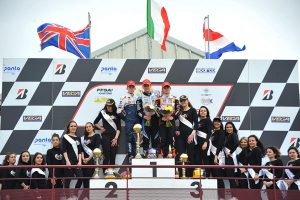 An exciting and long battle took place in Angerville (F), that has been the theatre of the second round of the karting WSK Euro Series. The hunt for the win or for improving the end result last until the very last meters in Angerville and several drivers came to the fore starting from Prefinals. Some surprises came also in the Finals and this made the French round quite important for the final classification. The winners will be decided in a short time frame as the two remaining rounds are quite close with each other: the title quest will, in fact, resume from Lonato (BS) on June 23rd before the final round of Adria (RO) on June 30th.

Travisanutto confirms his winning ways in OK
Lorenzo Travisanutto (on the top of the podium, between Patterson and Van T’Hoff, in the photo on top), confirmed to be the man to beat in Angerville as he won Prefinal and Final of OK. The Italian led the Final from lights to flag fending off the attacks of the British Dexter Patterson (both on KR-Iame-Bridgestone), before pulling away in the closing laps. Patterson ended the race in second position, leading the Dutch Dilano Van T’Hoff (Exprit-TM). Travisanutto installed himself on top of the classification after the first two rounds overtaking the Swede Dino Beganovic (Tony Kart-Vortex), who had a troubled weekend. 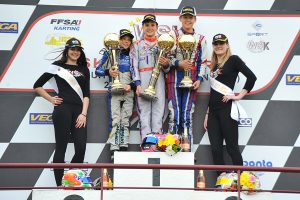 Andrea Antonelli clinching the win in OKJ
A bold performance up to OK Junior’s Prefinal envisaged for the Dutch Thomas Ten Brinke (FA Kart-Vortex-Vega) to end with a deserved win in Angerville and he was also leading the Final. In the closing laps though, Ten Brinke and the Brith Jamie Day (Exprit-Vortex) were battling with each other when the Dutch lost some ground in an excursion. Day secured, therefore, the win but was later on penalized by Stewards. The Italian Andrea Kimi Antonelli (KR-Iame) got the most of the situation and inherited the win at the end of a race always close to the leading duo. Antonelli was followed by the Dutch drivers Robert De Haan (Exprit-TM) and Laurens Van Hoepen (FA Kart-Vortex). De Haan is currently leading the provisional classification as he overtook the previous leader Nikita Bedrin (Tony Kart-Vortex). 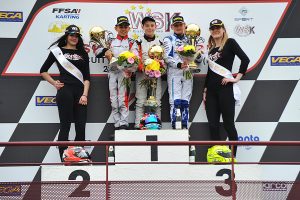 Macintyre victorious in 60 Mini
The final lap has named the winner of 60 Mini at the end of a race that saw several contenders aiming to the win. United Arab Emirates’ Rashid Al Dhaheri got away from the pole position thanks to the victory of the Prefinal. Shortly after the Brit William Macintyre took the lead followed by the Belgian Ean Eyckmans (all on Parolin-TM-Vega). These two started a battle and the Belgian managed to lead the British driver for a couple of laps before being taken by Macintyre and Al Dhaheri. The podium welcomed the winner Macintyre followed by Al Dhaeri in second and Eyckmans in third. The British driver is now leading the standings.