Birel ART: Irlando Emerges from the Chaos of Angerville 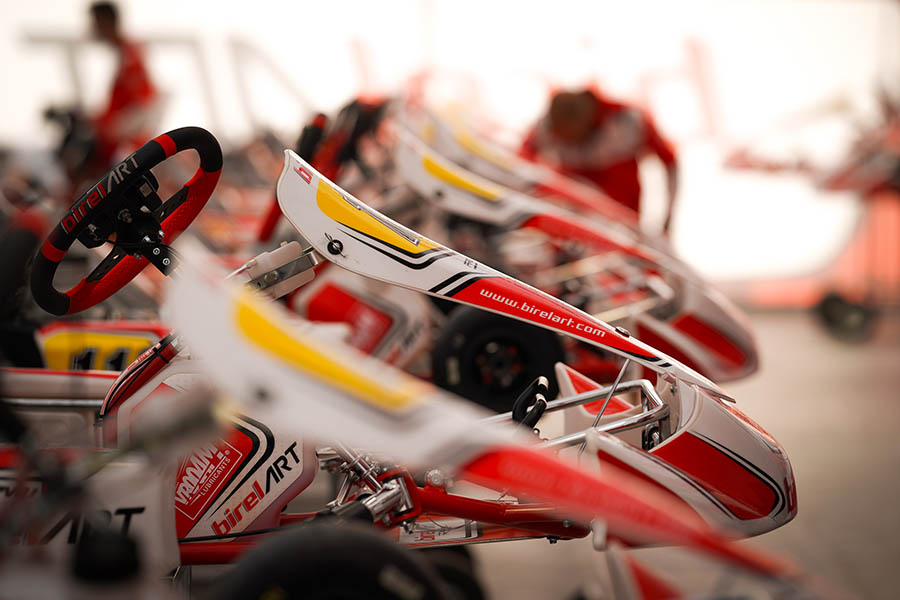 The first round of the FIA Karting European Championship – OK & Junior was held in France on the Angerville circuit. It was the scene of serious clashes generating many incidents. The competitiveness of the equipment and the talent of the drivers had much to do to overcome crashes and penalties. Only Alex Irlando was successful with his 8th position in OK to show the potential of the Birel ART Racing team.

However, analysis of the French competition reveals a very interesting level of performance from the Birel ART / TM Racing factory team, both in OK and OK-Junior. The Angerville circuit unfortunately generated a large number of contacts as well as spoiler penalties. At Lissone the team is already looking forward to the 2nd meeting at Genk to highlight the quality of the equipment and the work done by everyone.

“Of course, we cannot be satisfied with the result at Angerville,” said Ronni Sala, President of Birel ART. “But I want to congratulate the team for their efforts and our drivers for their commitment. I would first highlight the competitiveness of Coluccio in OK, the significant progress from Irlando and his third fastest time in the final which demonstrated the performance of our equipment, the convincing performance from Nepveu and the fighting spirit of Maya Weug. In Junior, not finishing highly in Timed Practice weighed heavily thereafter. Camara however managed to climb from 61st place to 15th in the Final, and Ressico D’Aloiso and Bertuca also made positive progress while their team-mates were fighting bravely despite penalties and delays.”

Starting well with 10th in Qualifying, Luigi Coluccio was somewhat delayed in the heats before giving up at the start of the Final after a collision. After strong heats where he managed to avoid a lot of the traps at Angerville, Alex Irlando drove a strong Final and moved up to 8th place having achieved the 3rd best time. Thomas Nepveu regained ground in the heats and took another nine places in the Final before being penalised for an unhooked spoiler. For his debut, the Thai driver Sutumno Thanapongpan kept improving despite the difficult conditions.

The Juniors of Birel ART Racing were very competitive in the last free practice, but lacked success in the timed practice, which complicated their Qualifying Heats. Despite his 61st time and two spoiler penalties, Rafael Camara managed to qualify and moved up 18 places in the Final to reach 15th. Lorenzo Ressico D’Aloiso followed a similar course, finishing 19th with a 10-place gain in the Final, while Cristian Bertuca retired after two laps after taking 26 places in the heats. Elliott Vayron was much more competitive than his results showed. He was fastest crossing the finish line of his last heat in 2nd place, but he was sanctioned several times over the weekend.

The female drivers of the Richard Mille Young Talent Academy have had varying fortunes. Maya Weug was once again very combative in OK, obtaining notably a 3rd and a 2nd place in her heats. Two retirements however hampered her score and she had to retire at the start of the Final after another clash. Julia Ayoub did not have an easy job in the second half of the pack, and two retirements following race incidents prevented her from Qualifying.

The Birel ART Racing team is preparing to take on new challenges in less than two weeks for the opening of the FIA Karting European Championship – KZ and KZ2 at Wackersdorf, Germany.