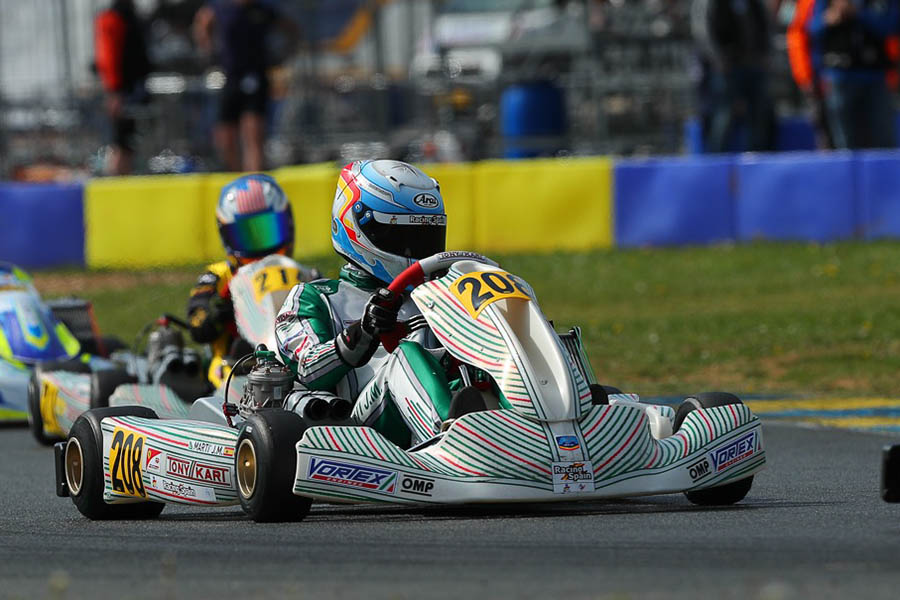 In the first weekend of FIA Karting European Championshipin Angerville, our drivers are always fighting for top positions. Unfortunately, some bad luck prevent them from achieving results up to our performances.

With the fourthplace in Final, Josep Maria Martì engaged in the OKJ category, closes a good weekend in the best way. The Spaniard, after taking care of not getting involved in the brawl at the start, sets his pace and begins to gain positions until he even manages to fight for the third step of the podium. His brilliant performance comes after finishing the Qualifying Heats always in top ten (third, fourth, fifth, sixth and ninth).

Also his team-mates Nikita Bedrin and Alex Dunne are doing very well, fourteenth (but seventh at the finish line) and seventh respectively. Both manage to recover positions (4 Dunne and 12 Bedrin), even after some contacts over the heats that compromise the starting grid for Sunday’s race, on a circuit where overtaking is very difficult. Our two standard-bearers, however, are always in the top positions over the weekend with Nikita Bedrin centering a second and fourth place and Alex Dunne who, besides the victory in the heats, gains a second, a third and a fourth place.

Matheus Morgatto has been leading the Tony Kart group in the OK class since Friday. The Brazilian is sixth at the end of qualifying heats, racing his Racer 401R chassis powered by Vortex. Two second and one third places and a best lap obtained in the Heats, however, are not enough to gain a good position in the Final line-up, due to a contact in one of the heats, forcing him in the tenth position.

During the heats, there are plenty of opportunities to prove the quality of our material and our drivers. In the same round, where Sebastian Montoyacrosses the finish line first, Joseph Turneycompleted a comeback (the latest of many) of 19 positions and finishes third. Noah Milell gains a third, a seventh and a tenth place too. Also Dino Beganovic (Ward Racing) obtains a victory and a second place with Tony Kart Racer 401 R powered by Vortex engine.

The weekend of Ryan Li Mingyang is pretty difficult and he could not enter the Final.
The Tony Kart Racing Team will get back to the track next weekend, again in Angerville, on the occasion of the second round of WSK Euro Series for OK, OK-Junior and 60 Mini categories.