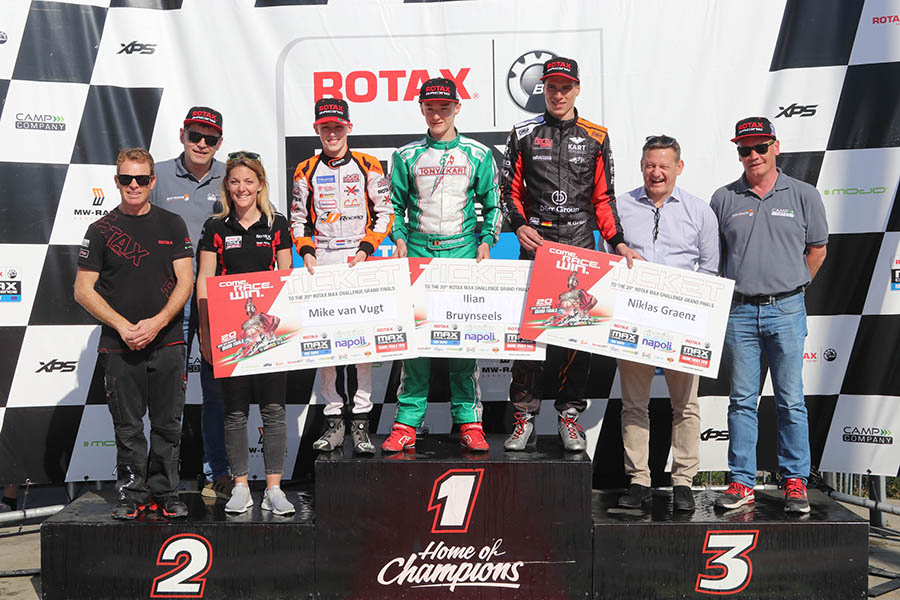 Karting Genk once again lived up to its slogan of being “The Home of Champions” where the winners of the first Rotax MAX Challenge Euro Trophy Open were crowned on the 1,360-metre long track in Belgium from April 19th to 21st, 2019. Almost summerlike conditions made for perfect racing throughout the Easter weekend, welcomed by the 127 drivers from over 20 countries around the world who joined the international competition.

The positive interest from afar was not by chance, as the RMC Euro Trophy Open provided an early season way to qualify for the Rotax MAX Challenge Grand Finals in Sarno (ITA) in October this year. The winners of the Junior-, Senior- and DD2-classes could win one of the coveted invitational tickets. The best DD2 Masters driver was rewarded with free entry for the series in the RMC Euro Trophy 2019. So, it was no surprise that the three-day competition was thrilling until the chequered flag!

Reigning Euro Trophy Junior Champion Mike van Vugt (JJ Racing) set the tone at the beginning of the weekend. The Dutchman drove the fastest time in qualifying by a time of 55.109 seconds and a lead of almost two tenths of a second. The youngster repeated this pace in the following two heats, which he won convincingly to start on pole position for the first final on Sunday. Meanwhile, his compatriot Kris Haanen (Bouvin Power) obtained enough points to line up alongside the pole-sitter.

In the first final, the tide turned for Mike van Vugt. In the beginning of the race, the Dutchman dropped back a few positions, putting him in a chaser role. By the end, he made his way up to second place again, but could ultimately not prevent the victory of Kris Haanen. However, the Exprit pilot struck back in the second final. At an early stage, he made it to the front and managed a safe victory over the 13-lap race distance, despite the lasting challenge from Thom Reinaerdt (GKS Lemmens Power) in P2. Mike van Vugt secured both the day’s victory and an entry at the Rotax Max Challenge Grand Finals 2019. Kris Haanen came in second on the podium overall, while Thom Reinaerdt (GKS Lemmens Power) completed the Dutch triple success in Junior MAX.

A very close competition was shown in the big grid of seniors. At the end of the qualifying session, not less than 43 of the 47 drivers were separated by just one second. First and foremost, it was local hero Ilian Bruynseels (Bouvin Power) who set the quickest lap of 53.797 seconds, thus having the best chances for the qualifying heats in the afternoon. And indeed the Belgian seized his advantage by taking both race wins, which boosted him to first place in the rankings.

Even on the final day the local hero was unbeatable. Although he had to fight hard in the finals, he claimed both victories in the end. Behind the winner it was the Swedish racing lady Mathilda Olsson (Strawberry Racing) and the Brit Bradley Barrett (Dan Holland Racing), who took the prizes for best supporting roles in second and third place in both races. This order corresponded to the results of the overall classification, so Bruynseels was awarded with the Rotax MAX Challenge Grand Finals ticket.

In the gearbox category, Xen de Ruwe (SSC – Sportstil) – one of the most experienced and successful RMC Euro pilots – underlined his skills in qualifying and set the bar for the weekend with a time of 53,530 seconds. But during the heats, his opponents caught up, preventing a walkover of the Belgian driver, who is racing under a Slovenian license. After Xen de Ruwe won the first heat, German Niklas Graenz (42 Competition) won the second race, while Polish driver Piotr Wisnicki (Wyrzykowski Motorsport) was successful in the last heat. However, in the general points ranking, it was Xen de Ruwe still leading. He secured pole position by only one point for the first final on Sunday from Niklas Graenz. Austria’s Daniel Machacek (Daems Racing Team) moved up to third place with consistent top results.

On Sunday, Niklas Gränz had his magic moment. The German was in the best shape and celebrated a controlled double victory in both finals, which he was never in great danger of losing. This gave the reigning German RMC champion the win in the overall classification and the much-sort after ticket to the Rotax Grand Finals in Italy. Behind the KR-pilot, Daniel Machacek took second place in both races and on the podium. In third, the Finn Ville Viiliaeinen (Pentti Viiliaeinen) made it onto the podium, although he ended on equal points with Xen de Ruwe, but the best result from Final 2 determines the order.

Slawomir Muranski (46 team) lived up to his reputation as the reigning Rotax Euro Trophy champion from the very beginning of the weekend. The Pole set the fastest lap in qualifying and was unbeatable in the heats. With two wins, he defended the first place in the intermediate ranking ahead of the Austrian Roberto Pesevski (KSCA Sodi Austria Team) and the German Michael Becker (RS Competition).

In the first final on Sunday, Slawomir Muranski was in a class of his own. He clearly won the first major race, therefore heading into the decisive second final as the favourite. But, here the Pole had to leave the way to his opponents. He dropped back several positions, watching Roberto Pesevski taking both, the race win and day`s victory. Slawomir Muranski had to be satisfied with second place on the podium. Third place went to the German Sebastian Rumpelhardt (RS Competition) with two solid final results.

After the successful Open event, the European Rotax racing series now looks forward to the first round of the championship which takes place from May 31st to June 2nd, 2019. The Rotax MAX Challenge Euro Trophy will officially kick off its season on the modern Adria Karting Raceway (IT) close to Venice. Throughout the year the year, the series visits the top karting tracks of Kristianstad in Sweden and Wackersdorf in Germany. The grids are already filling and promise a highly competitive season, at the end of which the best-placed drivers will be rewarded by a total of 7 tickets for the RMC Grand Finals.

More information regarding reports, photos, results and livestream coverage are available on the official website –  www.rotaxmaxchallenge-eurotrophy.com