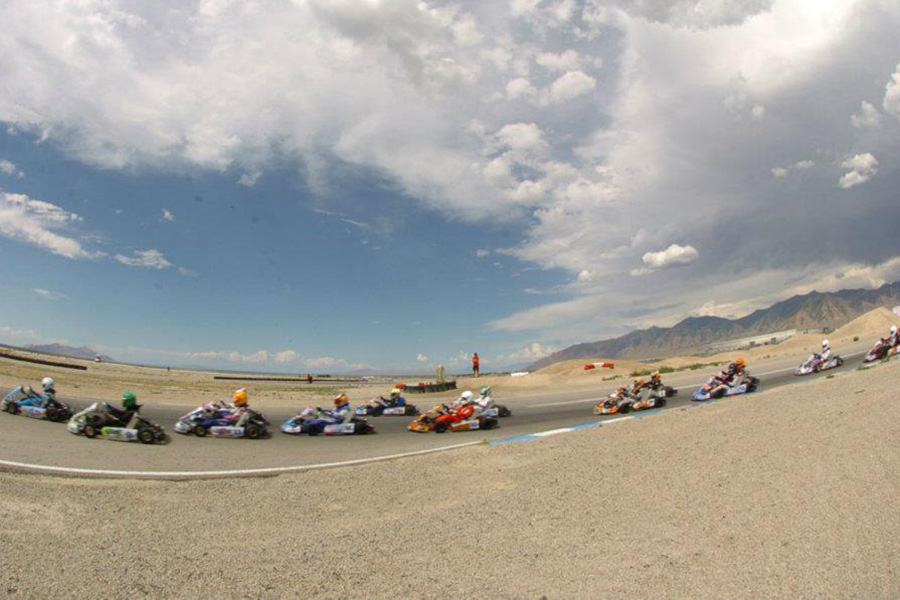 The Superkarts! USA Pro Tour returns to the Salt Lake City area with the 10th running of the SpringNationals, set for May 3-5 at the Utah Motorsports Campus (Photo: On Track Promotions - otp.ca)

Just last week, Superkarts! USA passed a milestone in its history, as April 16 marked the 9th anniversary of the launch of the Superkarts! USA Pro Tour. In 2010, the program made its debut in Sonoma, California, hosting the first-ever SpringNationals. The SKUSA Pro Tour has grown in leaps and bounds since those first laps, and the program is preparing to host the 10th edition of the May event. This year’s SpringNationals features a return to the Salt Lake City area, and the Utah Motorsports Campus in Erda, Utah, to be specific. SKUSA visited the 13-year-old facility for the first time in 2012, then known as Miller Motorsports Park, for the SummerNationals that championship season.

A portion of the $162,000 prize package for the 2019 Superkarts! USA Pro Tour will be up-for-grabs at the SpringNationals in Utah. Another round of Evinco tires are to be handed out each day at the podium, with all of the top-three finishers taking home one set. The combined $5,000 guaranteed weekend cash payout for X30 Senior and X30 Junior is on the line in those two divisions, with a cool $1000 going to the driver with the most points over the two days of competition. Pro Shifter, Pro Shifter 2 and G1 Gladiator are fighting for a free entry toward the SKUSA Pro Tour SummerNationals for the top points earner. All other remaining classes will have a potential $1,000 weekend purse should the driver entry total reach 30. The chase for the $74,000 in prizes for the SKUSA Pro Tour Championship program continues – including the four 2019 IAME International Final tickets – with drivers at the WinterNationals solidifying their positions in the hunt for a portion of that purse.

The Croc Promotion USA/Mad Old Nut Racing Pro Shifter division will welcome the most competitive field in the young timeline of the new IAME SSE 175cc engine. All three SKUSA national plate holders return, including defending champion AJ Myers, who won at the WinterNationals in March but has since joined a new team. Myers will run with CRG Nordam in Utah. SKUSA #2 Kyle Wick and three-time SuperNationals winner Billy Musgrave (national #3) are set for SpringNats, as are former champions Jake French and Joey Wimsett who will be making their Pro Shifter debuts. While the focus may be on those drivers, Andrew Bujdoso is the driver to beat thus far in the championship chase. The Ohio native scored the opening round victory at CalSpeed, and holds the point lead heading into Utah.

X30 Senior, sponsored by PSL Karting, remains the most competitive division at the SKUSA Pro Tour. Two different drivers came out of Fontana, California with victories, including former SuperNationals winner Joshua Car and two-time WinterNationals winner Christian Brooks. It was Brooks who secured his second career victory on Saturday in the wet conditions while Car, the 2017 SuperNats victor, swept the action on Sunday. Add in his third-place finish from Saturday, and Car leads the standings over Brooks. Former Pro Tour champion Austin Garrison sits third with a host of drivers close behind in the standings, all looking to improve their position in Utah.

Two drivers were able to stand at the top of the podium in Fontana in Pro Shifter 2, sponsored by Musgrave Racing Company. Race Liberante had a perfect score in the tough wet conditions on Saturday, and led the Final on Sunday until contact took him out of the race. That promoted Max Hewitt to the top spot, as he earned his second career SKUSA Pro Tour victory. Hewitt has the 13-point advantage in the championship chase over Liberante, with Calvin Ming sitting in third. Jordon Musser has gone undefeated in 2019 for G1 Gladiator, sponsored by 3G Kart Racing, including the SKUSA Winter Series and the opening rounds of the SKUSA Pro Tour. Musser was challenged all weekend in SoCal by John Crow and Dan Monteiro, with entries expected to reach the double-digit number in Utah. Brett Harrelson scored his first two victories at the SKUSA Pro Tour, winning both main events in the S4 Master Stock Moto class, sponsored by MG Tires. Ken Schilling and Miguel Garcia make up the top three in the championship chase.

Two-time SKUSA Pro Tour champion Derek Wang is back on top in the standings for X30 Master, sponsored by Chuck G Fabrication. Wang won on Sunday in Fontana after trailing first-time SKUSA Pro Tour winner Vatche Tatikian on Saturday. They hold the top two spots in the championship chase, with Tatikian trailing Wang by 45 points. SKUSA #3 plate holder Jess Peterson sits third. Steve Martin and Jon Persing became the first-ever winners on the SKUSA Pro Tour in the X30 Super Master sub-category, sponsored by Nash Motorsportz. Martin won Saturday as Persing scored the win on Sunday. DJ Ortiz was third both days at CalSpeed and is tied with Martin for the overall top spot in the standings, with Persing a close third.

The X30 Junior class, sponsored by Rolison Performance Group, welcomed two new winners to the SKUSA Pro Tour. Canadian Dale Curran won Saturday while Texan Branyon Tiner was triumphant on Sunday. Tiner left California as the championship leader by 25 points over Mexican driver Noel Leon, with former SuperNationals winner Connor Zilisch right there in third. Curran is back in eighth overall after a rough Sunday outing, with a host of drivers in between vying to close the gap on Tiner in Utah.

Sebastian Ng was able to leave California with two victories in Mini Swift, sponsored by Aluminos. While the driver from the country of Panama did not cross the line as the winner in either main events, penalties to other drivers put him two for two in the win column thus far. Ng holds a 20-point advantage in the championship chase with Enzo Deligny sitting in third. Logan Chambers and Graham Trammell split the wins at CalSpeed in Micro Swift, sponsored by AiM Sports. Trammell won Saturday with Chambers topping the field on Sunday, and leads by 10 points in the standings. Jack Iliffe was runner-up to Chambers in the main event, and holds third.

KA100 Senior, sponsored by IAME USA West, made its SKUSA Pro Tour debut at the WinterNationals. The category welcomed two new series winners in Alan Tang on Saturday and Austin Osborne on Sunday. Nick Persing was quick both days, winning the Prefinals and placing runner-up in each main event to leave the weekend as the point leader. Osborne is second, trailing by 40 points, with Nick Ramirez in third and Tang fourth. Also making its debut on the SKUSA Pro Tour was the KA100 Junior division, sponsored by Late Apex Kartworks. Ethan Ho joined the long list of first-time winners at the SKUSA Pro Tour, as he doubled up at the WinterNationals. Ho heads to Utah leading the standings by 85 points ahead of Connor Zilisch, with Kyffin Simpson in third.

Online pre-registration for the 2019 SKUSA Pro Tour SpringNationals at Utah Motorsports Campus ends on Sunday, April 28 at 11:59pm PDT. Head over to the SKUSA MotorsportReg.com page to enter now. Team tire orders are due by Thursday, April 25 at 5pm PDT. Pit Spot reservations and a tentative event schedule can all be found at the SKUSA Pro Tour page. Competitors, teams and attendees should know that a shuttle service from vehicle parking to the SKUSA paddock area will start Thursday morning, running for the first hour each day.