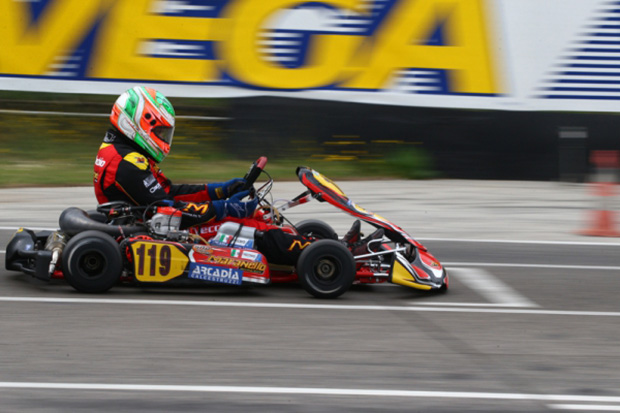 Ceresoli and Hold have been shining in qualifying at the South Garda Karting in Lonato where they posted the fastest times of their sessions in KZ2. The final stages have been quite unlucky, but the competitiveness of Maranello Kart’s drivers has been excellent.

Maranello Kart’s drivers have been once again among the main protagonists of the 30th Andrea Margutti Trophy, the classic early season race held at the South Garda Karting circuit in Lonato to remember the young karting talent Andrea Margutti, who passed in 1989.

This event has had a good number of drivers on track this year too, 237 out of the 251 entered, 67 of which in the highest category, KZ2, where Maranello Kart has fielded Andrea Ceresoli, Christoph Hold with Maranello Kart Austria, Luigi Del Vecchio with team Oracle, while SRP Racing Team Fabrizio Rosati, Alessio La Martina, Dennis Fretzer and finally Gleb Shapovalov competed for Victory Racing Team.

Christoph Hold posted the quickest time in Series-1 qualifying in 46.285s, while Andrea Ceresoli went quickest in Series-3 in 46.087s. Such a great competitiveness level launched Maranello Kart’s colors to the top of the provisional classification, with Ceresoli second overall and Hold third. The Maranello Kart’s duo also put in good results in the heats, as Ceresoli was eighth and Hold ninth, while Del Vecchio was 15th. Rosati and La Martina also managed to brilliantly go through the second chance race and qualify for the Final. The intense fight that developed in Prefinal and Final did not allow Maranello Kart’s colors to shine on the podium as they would have deserved, but the final part of the race was positive nevertheless. Ceresoli was 19th, Del Vecchio 20th and La Martina 24th. Hold was unfortunately forced to retire early from the race and Rosati had a similar fate.

Maranello Kart has also been present at the Andrea Margutti Trophy in OK-Junior with Mattia  Simonini, who classified 13th and displayed a great speed for the whole weekend, and in X30 Senior with Mario Martucci, who unfortunately had to retire from the Final.

The next appointment of track for Maranello Kart is the opener of the German Championship DKM in Lonato next April 12-14th.

Complete results are available at www.southgardakarting.it