DKM Starts Into the Season with Thrilling Races 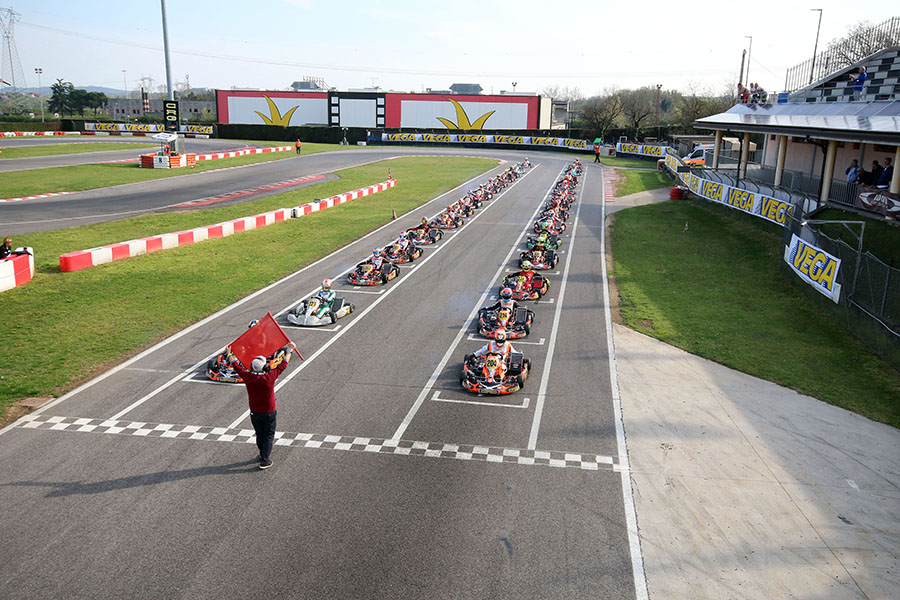 Last weekend, the South Garda Circuit in Italian Lonato welcomed the participants of the German Kart Championship to the first event of the year. 187 participants made for record fields in the four kart racing grade series of the German Motorsports Foundation (DMSB). The weather caused exciting races on the final Sunday.

The DKM already experienced a huge interest from drivers and teams since the beginning of registrations in January. 187 drivers from all over the world started at the kick-off now and made for a new record field. The 1.200m long track close to Lake Garda was the location of a DKM race for the third time and the conditions were challenging once again.

After temporary sunshine during trainings and the heats on Saturday, it rained on Sunday and the drivers had to get used to the new conditions. The changing weather conditions were also challenging for the organization of the event. In the end there were seven different winners in seven finals: Tim Tröger (DSKC), Fabrizio Rosati, Lorenzo Giannoni (both DSKM), James Wharton, Robert De Haan (both DJKM), Lorenzo Travisanutto and Kas Haverkort (both DKM).

The German Kart Championship is being accompanied by broad PR in 2019 again. Next to the usual DKM-magazine on MOTORVISION.TV, the DKM presented its own YouTube-channel in Lonato. There, the participants will be able to view the races again and can get a deeper view of the surroundings of the Championship due to small reportages.

DKM: World Champion Travisanutto starts into the year with a victory

The field of the German Kart Championship impresses with a huge quality again this year. The reigning World Champion Lorenzo Travisanutto (CV Performance Group) started for the first time. He stayed behind Kas Haverkort (CRG Keijzer Racing Team) in qualifying, but then made himself known with two victories at the heats. He also led the field during the first final race. From pole position, he defended his top position and kept it during the 21 laps. Things were more heated behind him: Six drivers fought for the remaining places on the podium. After a bad start, Haverkort fought his way back to second place. The last place on the podium was gained at the end of the race: Hugo Sasse (TB Racing Team) drove past his team mate Ben Dörr (TB Racing Team) and came in third. Reigning Champion Harry Thompson (Ricky Flynn Motorsport) followed in the wind shadow of the TB duo and came in fifth.

It looked like another victory for Travisanutto during the second final race as well. In the end, the Italian lost his advance though and had to let his pursuer Haverkort pass him by. The Dutchman won and thereby also took the lead of the Championship: “This was a perfect race. After I’d had some problems in the beginning, I was considerably faster than the competition during the second half of the race. We now want to continue like this throughout the course of the season”, Haverkort summed up. Travisanutto came in second in front of Leandro Anderrüti (Lanari Racing Team). Champion Harry Thompson (Ricky Flynn Motorsport) came in fourth in the end in front of Hugo Sasse (TB Racing Team). The German was the fastest driver of the field during the first half of the race and temporarily on second position, but fell back to fifth place until the end of the race. A spoiler penalty for Anderrüti changed the results subsequently again though. The Swiss lost his position to Thompson and was ranked fourth.

45 young drivers started at the races of the German Junior Kart Championship and the Australian James Wharton (Ricky Flynn Motorsport) dominated the events on Saturday. He achieved the role of favorite by being the fastest driver of qualifying and gaining two victories at the heats. He proved this right during the first final race and stayed calm despite the weather. Before the start of the first final race it started to rain and the entire field changed their tires after the pre-start. Wharton defended his top position on the wet track and celebrated a start-finish-victory. The remaining places on the podium were quickly gained by Robert De Haan (Energy Corse) and Christian Ho (Ricky Flynn Motorsport). The fight for places four and five was really thrilling. German Jakob Bergmeister (Millennium Racing Team) dueled with William Karlsson (Nika International) – despite numerous attacks by his Swedish pursuer, he defended his position and ended up in the cup ranks.

The second final race of the juniors started relatively cautiously. The drivers took their positions early. Only kick-off winner Wharton had to give up after a turn and had to deal with a severe setback. After the race half-time the moods of the youngsters changed though. Leading driver De Haan lost considerable ground when he overtook the last driver and had to let his direct pursuer Luca Leistra (RS Schumacher Racing Team) pass him by only a short while later. During the following laps, the duo changed the lead a couple of times, until it came to a collision shortly before the end of the race. Both slid into the off – De Haan got back on track more quickly though and achieved the victory. His summary was accordingly positive: “After the start, it looked like a sure win for me. In the end things got really close though and I had a thrilling fight with Luca. This wasn’t an easy race.” Behind him followed Ho and Leistra. The latter had to deal with another setback at the finish line – a spoiler penalty cost him his top three result. Karlsson was the new third winner. Leistra came in fourth in front of German Jakob Bergmeister.

Reigning champion Fabian Federer (SRP Racing Team) set the pace in the German Shifterkart Championship on Saturday. After pole position at qualifying, the South Tyrolean won both heats as well. In the first final race on Sunday his team mate Fabrizio Rosati surprised everyone though. As the only driver of the entire field, he chose slick tires and was unstoppable on the drying track. He sometimes drove three seconds faster than his opponents and fought his way forward from 25th starting position to the front of the field in only a couple of laps. Behind him followed Federer in front of Giacomo Pollini (N.G.M. Motorsport), who completed the top three. Stan Pex (SP Motor Sport) and Jeremy Iglesias (RS Schumacher Racing Team) came in fourth and fifth.

The conditions were completely changed before the start of the second final race. This time it started to rain and Rosati was one of the few drivers who used rain tires. In the end, the race wasn’t started though and all drivers got the chance to change their kart settings. Shortly after the start, Lorenzo Giannoni (CPB Sport) took the lead and held on to it until crossing the finish line. In the end, the Italian could hardly believe his success: “This is my first victory at the shifterkarts and with these conditions! I’m very proud to have won and am now really looking forward to the next race.” Jeremy Iglesias (RS Schumacher Racing Team) and Federer were securely on their way as well. Benjamin Tornquvist Persson (CRG Holland) made things exciting though: From 20th place he fought his way forward and came in fifth behind Pollini. Alexander Schmitz (Renda Motorsport) was the best German driver by coming in ninth in both final races.

Due to the huge demand at the DMSB Shifterkart Cup, the field of participants was enlarged to 54 drivers this year. In Lonato, 50 drivers started and thereby proved the quality of the second shifterkart class within the framework of the DKM. After qualifying, the fast Italian driver Natalia Balboa (N.G.M. Motorsport) led the Championship and also won the first heat. During the second heat, she fell back though and made way for youngster Senna van Walstijn (SP Motor Sport).

The Dutchman also won a heat and came in fourth once, which gave him pole position on Saturday evening. For the pre-final, the field of the DSKC was divided into two groups. The best 17 drivers would then enter the final race. Both races took place with changing conditions. Robert Kindervater (BirelART Racing KSW) won the first race and Balboa won the second. Both didn’t have enough weight at the technical post-control though and were disqualified. Thus, Jeroen Bos (CRG Holland) and German Valentino Fritsch (BirelART Racing KSW) led the fields.

The Dutch polesetter won the start of the final race as well, but Valdemar Rismo (RS Competition) raced to the front from behind. During the course of the race, Bos didn’t give up though and took the lead again shortly before the end of the race. He celebrated his comeback after 21 laps with a well-known victory. The joy didn’t last long though: a subsequent five-seconds-penalty threw him back to third place. New winner was rookie Tim Tröger (Mach1 Motorsport). “Wow, this was my first race in the DSKC and it is sensational that I’ve finished it as winner. We worked really hard throughout the whole weekend and are now rewarded for this. Thanks to Mach1-kart and my father for their support”, the German rejoiced in the evening. Behind him, Rismo came in second. The cup ranks were completed after a close fight by Davids Trefilovs (SRP Racing Team) and Fritsch.

After the thrilling start of the season, the German Kart Championship is going to continue from May 10-12. Then, the next championship points are going to be dealt out on the Prokart Raceland Wackersdorf.