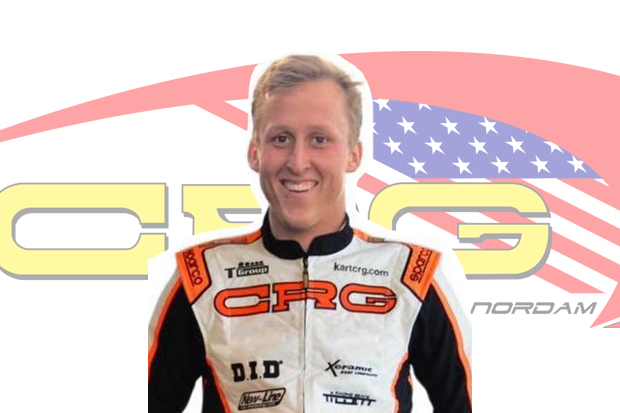 “We are thrilled with the opportunity to add a multi-time champion to our stable,” stated CRG Nordam Team Manager Tony Tesoro. “I have known AJ for many years, and I’ve seen the development of his talents first-hand, both on and off the track. Myers will be able to focus 100% on his performance, while also providing another great source for our younger drivers to work alongside.”

Myers has been a top contender in USA karting for the last five seasons. His first major title came in 2014, winning the United States Pro Kart Series championship in IAME Pro. That same year, Myers was the top finishing USA driver at the SKUSA SuperNationals in the star-studded field of KZ2, placing on the podium in fifth alongside multiple world champions. Since then, Myers has garnered a number of podiums and victories in TaG and shifterkart competition. In 2016, AJ dominated the S1 action at the SKUSA SummerNationals in New Castle, winning both main events, and he went on to finish second at the SuperNationals, as well. Last season, he added two wins and two runner-up results to claim the SKUSA Pro Tour S1 championship, and again finished as the runner-up at the SuperNationals. As the current #1 ranked driver by eKartingNews.com, Myers continues to add to his CV in 2019, and sits second in the new Pro Shifter category for the SKUSA Pro Tour standings after a win at the WinterNationals, coming off championships at the SKUSA Winter Series and Florida Winter Tour.

“I’m really excited for this opportunity that CRG is giving me,” commented AJ Myers. “They are one of the biggest name in karting and I look forward to being able to represent them.”

AJ will make his first start with CRG Nordam at the upcoming SKUSA Pro Tour SpringNationals, set for May 3-5 at the Utah Motorsports Campus in Erda, Utah. He joins Kyle Wick in Pro Shifter alongside Max Hewitt and Graig Alvarez in the Pro Shifter 2 category. Austin Garrison and Brenden Baker lead the team in X30 Senior while Noel Leon sits second in the X30 Junior standings. Former SKUSA Pro Tour champion Elliott Cox and Miles Hewitt round out the team in Mini Swift.

The CRG brand is coming off recent success on both coasts of the United States. In the team’s debut at the United States Pro Kart Series at the Southern Gran Prix in Ocala, Florida last weekend, Austin Garrison secured victory in the opening round and scored the most points on the weekend to earn the $2,500 purse. Garrison leads the championship in the X30 Pro category after the two rounds of competition. On the west coast, CRG drivers claimed two championships at the ROK Cup USA Challenge of the Americas program. The series finale at the Simraceway Performance Karting Center crowned Ron White in the Shifter Senior Rok division and Rod Clinard in the Shifter Masters Rok category. Both drivers earned tickets to compete at the Rok Cup International Final in Lonato, Italy.

CRG Nordam continues to cement its position within the North American karting community as it develops the CRG dealer network. Currently, 15 different states in the USA, along with British Columbia in Canada, are represented in the CRG dealer network with strong customer support being the focus for each operation carrying the CRG brand. The distribution warehouse and factory team shop in Conroe, Texas is fully stocked to deliver chassis and parts at any time.

To learn more about the CRG Heron and the full product line by the world-champion manufacturer, or to learn how to be part of this factory-based race tam, contact CRG Nordam via email tony@kartcrg-nordam.com or call Tony Tesoro at 813.720.5678.