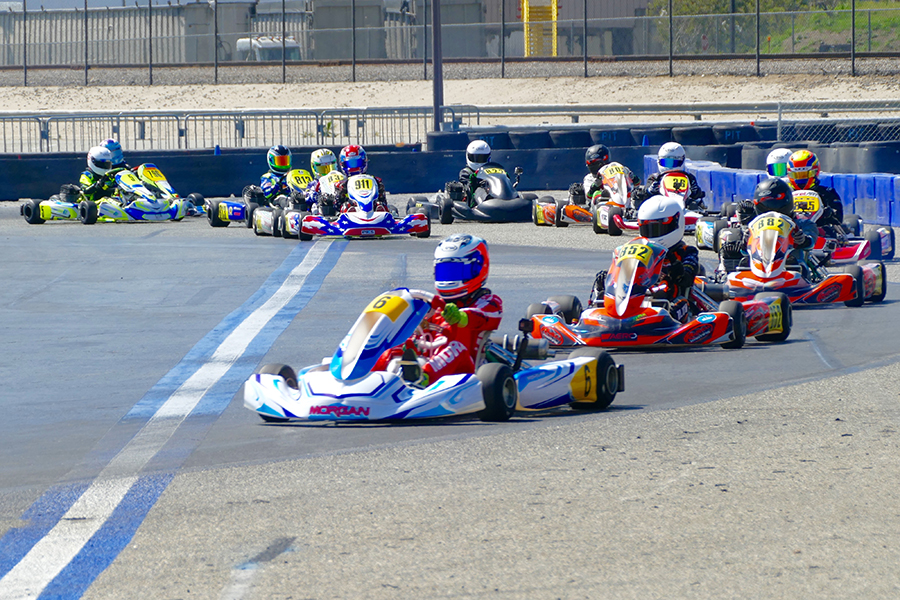 Round Two of the Los Angeles Karting Championship took on the CalSpeed Karting circuit on March 24 (Photo: LAKC)

The second round of the 2019 Los Angeles Karting Championship was held on March 24 at the CalSpeed Karting facility in Fontana, California. Coming off an amazing opening round back in February, the program continued the early stages of the championship chases with the second of nine races to be held in 2019. The same updated ‘Grande’ layout was the course for the second round, this time in the clockwise direction. The CalSpeed course and the racers of LAKC produced some excitement throughout the day.

The weekend was a breakout day for Joey Brienza as he dominated the X30 Pro division for his first Senior-level victory. The driver from Colorado cleared the 15-driver field in qualifying by over two tenths of a second. He then led all 10 laps of the Prefinal to win by two seconds, doubling that advantage in the 18-lap Final after an early battle with Joseph Daniele. Brienza recorded the fast lap of the race, helping to pull out to a four-second gap by the checkered flag. Bryce Stevens was able to slip past Daniele for the second spot on the podium while Branden Underwood and Jenson Altzman capped off the top-five. Ryan Carey won the X30 Intermediate for a second straight round, earning maximum points on the day, with Wolfgang Kladde second and Patrick Liddy third.

X30 Junior rookie Carson Morgan was able to secure his first victory in the category. Qualifying was a tight session, with the top-four drivers separated by just 84 thousandths of a second. Frankie Mossman was able to land the quick time ahead of Ayden Aquino, with brothers Carson and Cole Morgan in third and fourth. Carson jumped out to the lead in the Prefinal, leading all 10 laps ahead of Cole. Colin Queen tried to break up the duo in the Final, jumping to the lead on lap five, but dropping to third as the Morgan brothers decided the victory. Carson took over the top spot as the white flag waved, holding on to the position until the checkered flag, edging out Cole by 52 thousandths. Queen joined them on the podium with Mossman fourth – recording fast lap of the race – and Blake Nash in fifth.

Cole Morgan got his taste of victory in the new KA100 Junior division. It was a near sweep, coming just three thousandths short of a perfect score on the day. Tyler Ruth edged out Morgan for the fast time in qualifying, and the two fought strong in the Prefinal and Final. Hallie Schroeder made it a three-driver battle in the Prefinal with Morgan reaching the checkered flag first as the three drivers crossed the line separated by two tenths. Morgan and Ruth broke away in the Final, swapping the lead numerous times over the 18 laps. Morgan was able to establish himself into the lead, scoring the victory by 1.8 seconds over Ruth, who stole the fast lap bonus points. Schroeder won the third spot over Cole Schroeder, with Austin Manka in fifth.

Fresh off his first SKUSA Pro Tour victory, Vatche Tatikian continued his win streak with the victory in X30 Master. It was Branden Bell that appeared to have the top position in hand, as he edged out Tatikian for fast time in qualifying by one thousandth of a second. After Tatikian jumped out to the lead in the Prefinal, Bell retook the top position and won the Prefinal. Tatikian stepped up the pace in the Final, posting fast lap of the race and led all 18 laps to victory. Bell slipped back to third, losing the runner-up spot to Steve Martin. Paul Montopoli was fourth with Alex Gutierrez in fifth.

The largest category of Round Two was the Mini Swift class, featuring 22 drivers. Everyone was chasing Jesus Vasquez Jr. throughout the day, as the Round One winner swept the action. Securing fast time in qualifying, Vasquez led all 10 laps of the Prefinal. Vasquez was shuffled down to third at the start of the Final, but fought his way back to the point, winning by three seconds for the victory. Parker DeLong won the battle for second over Dane Idelson. Izaac Gutierrez and Ryan Persing capped off the top-five. Vasquez did not score maximum points with sixth-place finisher Logan Toke securing the fast lap of the race.

Alexander Gonzalez was able to break up the sweep by Truly Adams in Micro Swift. Adams set fast time in qualifying and won the Prefinal, then led the majority of the Final. Gonzalez fought his way up, grabbing the lead with two laps remaining. He held off Adams at the line to score the victory. Adams was second, but was penalized for contact earlier in the race. That promoted Rocky Moran to second and Alex Mercado to third. Sebastian Hauser and Caden Chrisman completed the top-five.

Billy Musgrave jumped back to his winning ways, earning the sweep in the new Pro Shifter 1 category. Keawn Tandon drove to second with SKUSA Pro Tour WinterNationals winner Andrew Bujdoso in third. Michael Korody secured his first win in 2019 in the Pro Shifter 2 division. Round One winner Justin Taylor set the pace throughout the day, with Korody taking control in the Final. Taylor ended up second with Connor Robles in third.

John Crow won twice on the day for a second straight month. Crow led wire-to-wire in the G1 Gladiator division, outrunning Javier Colombo and Carl Lewis to record maximum points. Crow was challenged in the KA100 Super Master division throughout the day. John swept the round, with runner-up finisher Howard Combee stealing fast lap of the race. Arman Cornell ended up third.

Jake Drew dominated the day in KA100 Senior, scoring maximum points in Round Two for his first victory of the season. Drew ran away in the main event, winning by 11 seconds over Henry Morse and Nick Persing. Derek Esquibel and Jared Caylor completed the top-five. Robert Perez took the victory in KA100 Master after Mike Smith, who set fast time in qualifying and won the Prefinal, suffered a mechanical issue in the Final.

Two rounds, two perfect scores to begin 2019 for Slava Prikhodko in the Open Shifter class. Prikhodko’s sweep of Round Two was highlighted by a 1.6-second advantage in the Final over Willy Axton with Vivek Tandon joining them on the podium in third. It was the same feat for Vicente Salas in the S3 Novice Stock Moto division. Salas was P1 in all three sessions, winning the Final by 8.9 seconds ahead of Chris Nunes and Luca Bortone.

The Honda Kid Kart Expert division welcomed its second winner in two rounds with Keegan Ellsworth taking the checkered flag. Round One winner Zate Legend set the pace throughout the day, until Ellsworth dropped fast laps of the race in the Final to steal the victory. Marcus Roy slid past Legend to grab second. Honda Kid Kart Novice also welcomed its second different winner in Gavin Lewis, who swept the action on the day. Ruby Murphy and Collins King joined him on the podium.