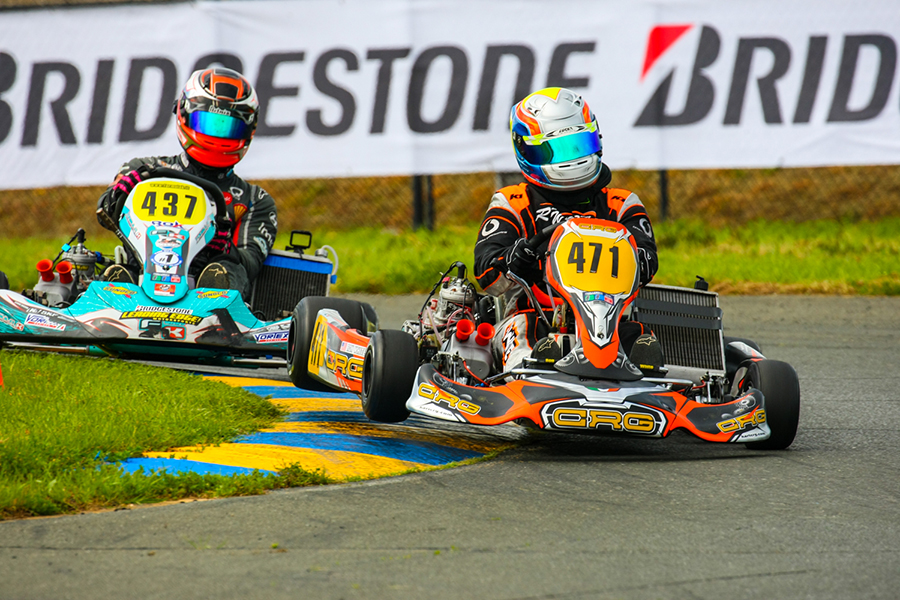 As it has for the last six seasons, the Challenge of the Americas capped its championship with a doubleheader weekend at the beautiful Simraceway Performance Karting Center in Sonoma, CA. Saturday’s action was the fifth race of the year, and everyone near the top of the point standings came into the day looking for quality results to set up for a title run on Sunday. The day dawned with a damp track and temperatures in the high-50s, but drivers moved from rain tires to slicks midway through the morning warm-up session. A light mist and a moment of light rain dampened the track mid-day and caused some concern, but the finals were full dry as the sun even made an appearance from time to time. Veteran Ron White (CRG) continues to be a badass in a shifterkart as he topped the gearbox class on home turf, while Jake Drew (Ricciardo) slipped by Jordan Redlin (Vemme) in the late going to win in Senior Rok. 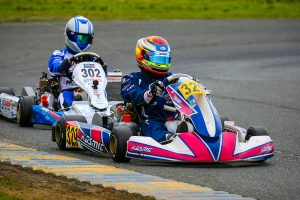 Jake Drew moved to the lead during the second half of the Senior Rok main event to take the win
(Photo: Sean Buur – Challenge of the Americas)

A solid field of 15 drivers took the green for the 22-lap Ruthless Karting Senior Rok main event, and it was Redlin who showed the way early, advancing from ninth to win the Prefinal. The Canadian paced a majority of the main event, but was eventually overtaken by Drew. Redlin attempted to fight back for couple of laps, but Drew was just a little too much and scored a 0.908-second victory. Point leader Cooper Becklin (BirelART) completed the podium in third, while reigning champion Jim McKinney (Exprit) was fourth ahead of Eddie Shimmon (Tony Kart).

Leading Edge Motorsports’ Danny Formal (Formula K) dropped the gauntlet early in Cameron Karting Senior Shifter Rok, laying down the best lap in qualifying, over a tenth quicker than Ron White (CRG). Formal continued his pace in the 12-lap Prefinal with White again the next in line. In the main, Formal again led early, but both White and Hunter Pickett (GFC) took turns up front during the first 2/3 of the race. White took full control of the race on lap 15 and powered to a 1.523-second win. Pickett and Formal completed the podium, with Zach Pettinicchi (Formula K) and Enzo Prevost (Aluminos) capping the top-five. White now leads the championship standings over Pettinicchi, who will likely need to top all three sessions tomorrow to have a chance to snatch away the crown and the ticket to the Rok Cup International Final in South Garda, Italy this fall. 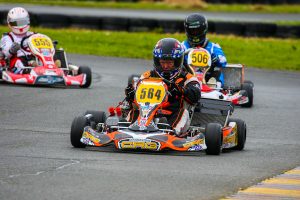 Patrick O’Neill powered to the lead in the Master Shifter Rok main, scoring a big win at his home track
(Photo: Sean Buur – Challenge of the Americas)

Nick Firestone (DR Kart) was quick out of the box to top APM Racing Masters Shifter Rok qualifying, but Rod Clinard (CRG) stepped up to win the Prefinal. In the main, Clinard led from the pole after outside polesitter Ben Schermerhorn (BirelART) bogged slightly. The true star was local hotshoe Patrick O’Neill (CRG), who took the lead from Clinard on lap 7 and never looked back. O’Neill was chased by Schermerhorn over the final laps to the checkered, and Clinard also arrived on the scene to make things exciting, finishing just off to Schermerhorn’s bumper. O’Neill won by just 0.130 seconds at the line.

Vemme drivers Nick De Graaf and Erik Jackson paced Masters Rok qualifying, followed closely by perennial frontrunner Derek Wang (FA). Interestingly, Wang has an incredibly impressive resume in US competition, but his stacked CV is void of a COTA title, which could be in the cards following a dominant day through the Prefinal and Final. As the point leader coming into the weekend, albeit without a race win in this year’s program, Wang firmed up his position on top of the standings with a 3.711-second victory over 2017 series champion Billy Cleavelin (Kosmic). De Graaf completed the podium, edging out Tim Meyer (Kosmic) for the spot. John Breidinger (GFC) rounded out the top-five. 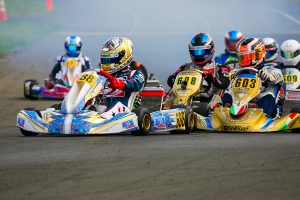 Masters Rok point leader Derek Wang will aim to score his first COTA championship on Sunday after winning his first race of the season
(Photo: Sean Buur – Challenge of the Americas)

Speedsense driver William Ferguson (Kosmic) topped all three sessions in EsTeam Junior Rok, laying down the fastest lap of the 22-lap final enroute to a 3.224-second win over Ethan Ho (Redspeed). The battle for the title will come down to these two talented drivers as the gap is now 15 points after today’s results, or just nine points with their respective drops. Nolan Siegel (Exprit) was in the hunt all day, but he destroyed a brake rotor and retired early. Liam Letzsch (FA) took up the charge and finished third, ahead of Macy Williams (FA) and Rye Myers (OTK).

In the Forward Direction Motorsports KA100 Senior class, Jackson Dunn (COMPKART) and Cooper Becklin (BirelART) were involved in a first corner incident at the green flag, which allowed Prefinal winner Colby Dubato (Ricciardo) to slide through to take the lead. Becklin was able to continue and chased down Dubato, turning the fast lap of the race in process, getting to within a second at the end of the 22-lap final. Dunn also recovered and completed the podium in third. Kalvin Chen (Kosmic) handled the three-driver KA100 Master class, sweeping all three sessions to score a 22-second win over EKN’s Rob Howden (BirelART) and class point leader Jimmy Gregory (K&K). Chen was involved in the opening corner incident, but was able to continue and eventually worked his way back to the lead. 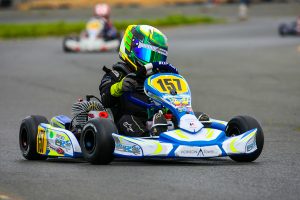 Filippo Sala (Vemme) swept the action in the Empire Karts Micro Rok category, getting the day off to a start with an impressive run in the damp qualifying session, turning a lap of 1:10.855. The top-three was separated by less than 1.5 seconds in the final, with Zachary Walrod (Benik) finishing second ahead of Gage Jarvis (Benik). Sydney Cassells (Vemme) finished fourth.

With the fifth event of the series now official and the day’s points calculated, we’ll turn our focus to the final race of the 2019 Challenge of the Americas program. They’ll crown their champions on Sunday and will award tickets to the ROK Cup International Finals the top-point getters in Senior, Junior, Masters and Mini Rok, as well as Shifter Rok and Master Shifter Rok. The champions in Micro Rok, 100cc Senior and 100cc Master will be awarded entry packages for the Rok the Rio event in Las Vegas in November. Catch all the live action on EKN tomorrow, beginning at 9:40 am PT with qualifying.