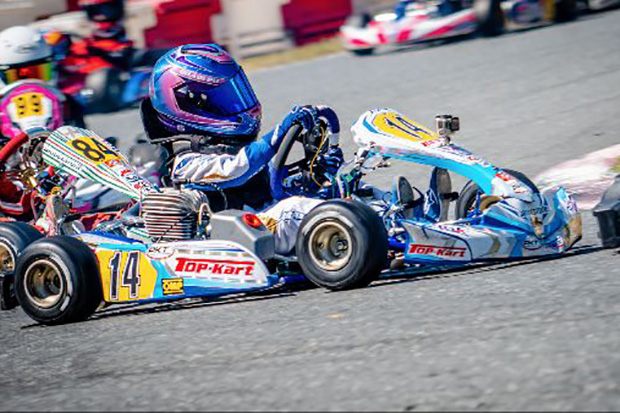 Sarah Bradley Racing coming off of two very competitive race weekends at the Rok Cup USA Round 3 event at Ocala Gran Prix and WKA Manufacturers Cup Series Round 2 at GoPro Motorplex. Both tracks were a new experience for the young female driver. She did her pre-race studying before each event, learning the track map and watching on board videos to catch herself up as quickly as possible before heading to the event with limited practice.

Ocala, Florida was a beautiful weekend from the time of unload on Tuesday through the Sunday Finals as the weather was warm and sunny, the perfect ingredients for racing! As Sarah quickly became accustomed to the race track after just a few sessions she was able to reach within just a few tenths of the drivers that were local racers who had much more experience with the track in her class.

The field was close in lap times between the top ten- just four tenths apart as she qualified in ninth position. Heat 1 was an all out brawl of a race from start to finish for the ten lapper. Sarah was able to improve her position by one spot earning an eighth place finish. Her luck turned for the worse in Heat 2. Running ninth and running faster lap times than the two in front of her, she was getting in position to soon overtake them when Sarah had to forfeit the race due to a wreck that blocked the track in the turn-two chicane section and was forced to hit the barriers to avoid. Heat 3 she was able to finish the entire race but due to lap traffic swerving across track in his haste to regain spots after a spin, while making the pass there was contact. She fell back seven spots from her starting position coming across the finish line in sixteenth.

The points system added up to start her in fourteenth out of twenty drivers for the Pre-final in the micro category. Digging from green to checkers, she was able to maneuver through the first turn carnage and gain 2 more spots further up the field finishing the pre-final race in twelfth.

Having had an up and down few days of on track action, Sarah was ready to show her team what she could do in the final race to bring home a top-ten finish on the weekend. A flawless drive from the nine year old, she never gave up during the eighteen lap final gaining positions throughout the race for a total of five spots, driving across the finish line in seventh position just a few kart lengths behind fifth and sixth place.

Sarah Bradley stated, “I wish I just had one more lap as I was catching the next two drivers and had the momentum to make the passes in the back section of the track. But I had a really fun race and am happy to earn a seventh place my first time at this track!”

Fast forward just five days later the dedicated driver looks to make her first ever appearance at a world renowned facility on the east coast, GoPro Motorplex for the WKA Manufacturers Cup event. Participating in the IAME Mini Swift 60cc category for this series, this was the largest class at the event with twenty drivers.

With only five allotted practice sessions on Friday, Sarah was forced to step up her ability to learn the track in a much shorter time period compared to the the week prior in Ocala. GoPro Motorplex,a much more technical track is based around the famous and historic Kartdromo Parma circuit in Italy. Sarah took to the track as if she had been there many times before. By the last session and on old tires she had proved herself to be competing in the top 10 drivers of the stacked field.

Beginning race day 1 on Saturday, Sarah was able to lock herself in a starting position of ninth place on the grid. Her luck quickly turned for the worse as they were turning the corner to take the green flag at the cut through, there was a lot of heavy bumping and in her attempt to stay off the bumper of the kart in front of he (to avoid a bumper penalty), the engine flooded and she was unable to re-fire to participate in the Heat Race. The result was that she had to start Heat two dead last. She got to work picking up 6 spots and garnished a fourteenth place finish.The average finishes put her starting the final in 19th. The bad luck continued for the final race. Sarah got immediately to work, picking up 8 spots in just 4 laps and was battling with the drivers just outside the top ten when a kart reentering back onto the track after a spin as the pack was passing, clipped her rear and the chain had come off ending her race. He was penalized but her day was done.

A wet start to the day on Sunday made for an interesting qualifying session. As many of the drivers don’t have quite the experience yet driving on high rubber tracks that have just been rained on there were a significant amount of karts spinning mid-corner. Never getting a full clean lap Sarah qualified in seventeenth position to start the day.

As the race day schedule on Sunday was a bit shorter than the previous day, the series jumped straight to pre-final events after qualifying. For this race Sarah had got off the line nice and clean with a few passes and gaining momentum during the fourteen lapper. Just over halfway, she was able to make some moves passing a few karts in front of her putting her in twelfth position just after they passed the start / finish line heading into turn one. Seconds later a couple of karts had struck a barrier causing the track to be blocked and was red flagged. Since her pass was after the checkered they reverted to the previous lap resulting in having to give up the 4 passes just made before the red flag. With only laps to go after the restart, she finished this race in the fourteenth spot.

Early on in the final race she was making moves picking off the competition one-by-one. By the halfway mark, she had made her way up to tenth position and was in a constant battle for the ninth spot. Sarah Bradley was able to keep herself in tenth to come across the checkers for the final event on the weekend.