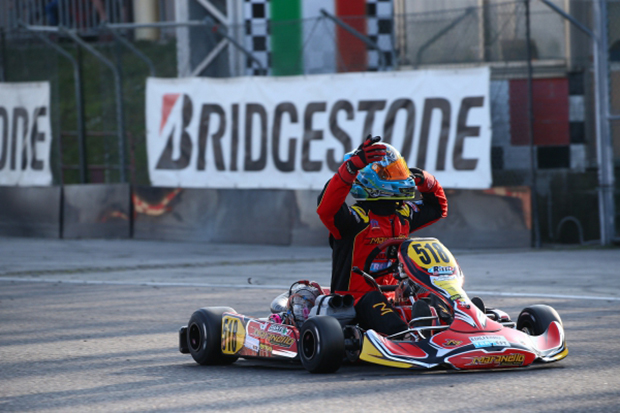 A great performance granted Massimo Dante the victory in KZ2 at the 30th Spring Trophy. Marco Vannini also on the podium in KZN Under in second place.

Maranello Kart and Massimo Dante put in an exceptional performance in KZ2 at the South Garda Karting Circuit in Lonato. Dante dominated throughout and claimed the victory in the 30th Spring Trophy.

Massimo Dante posted the quickest time since the beginning in qualifying with the assistance of SG Race and on TM engine by Rizzi in the closer of the Spring Trophy in Lonato. He then kept the momentum winning both heats he raced in and claiming a strong win also in the Final. Massimo Dante commented his triumph in this way: “I am really happy for this win that allowed me to take the Trophy after the second place I scored in the opener last March 17th. In the past days we made some changes that have been crucial. Our performance improved sensibly.”

Dante ended equal on points with Lanzeni in the final classification of the Spring Trophy, as both secured one win and a second place, but Dante scored a better result in qualifying in this round and therefore the Maranello Kart driver was awarded with the title.

Marco Vannini claimed the second podium in a row at the Spring Trophy in KZN Under. Mattia Giannini (team Oracle) also run a good race ending seventh. Francesco Simonazzi closed within the top ten in tenth place. Nicolò Polles was 20th, while Michael Dalle Stelle had to retire from the race.

Things did not go particularly well this time for Cristian Griggio in KZN Over. He had an incident with Roberto Profico, while the two were fighting for the podium behind Nalon. The best of Maranello Kart’s drivers was Ferruccio Alacqua in fourth, as he led teammate Attilio Borghi. Jacopo Vanelli was 11th.

Mattia Simonini was very close to bring home a great result in Junior Rok, but was unfortunately involved in an incident at the start of the Final when holding P3. The German Nicolas Loffler ended 15th in Mini Rok.

Complete results are available at www.southgardakarting.it

The next appointment on track is with the 30th Andrea Margutti Trophy on April 5-7th.