Birel ART: Coluccio Returns to the Podium in OK at WSK Euro Series in Sarno 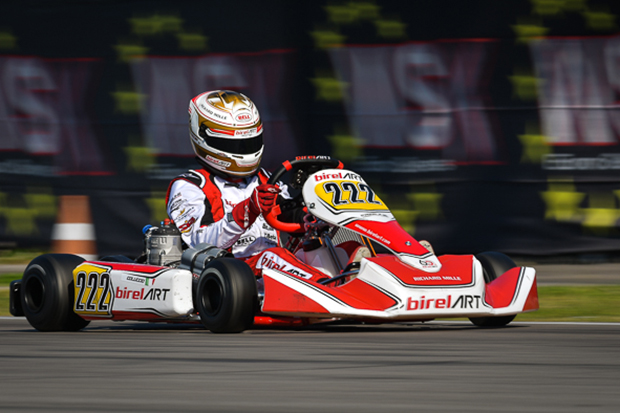 The first round of the WSK Euro Series at Sarno was marked by a reinforcement of the official Birel ART training in KZ2, rewarded by the presence of three drivers in the top 10 overall. In OK, Luigi Coluccio completed a very nice meeting by taking 2nd position in the Final as well as the Championship.

“The aim of this race was to finalise the preparation for the KZ1 and KZ2 FIA Karting European Championship, which will be held at Sarno on 16th June,” explained Ronni Sala, President of Birel ART Group. “With five drivers involved, the team was able to do a very good job with the equipment and performance has progressed well. Longhi, Kremers and Irlando kept up a very good pace, while Marseglia and Loubère gained solid experience. We are also very pleased to have enabled Coluccio to fight for victory in OK within a month of the first meeting of the FIA Karting European Championship.”

Coluccio regains his rank in OK

One week after the last event of the WSK Super Master Series, Team Birel ART Racing remained at Sarno for the start of the WSK Euro Series. Luigi Coluccio quickly joined the top three in the OK category in the heats and during the Prefinal. He again increased the pace in the Final and managed to take a very nice 2nd place among a top-class international field. During this time, Thomas Nepveu solidified his progress by moving up to 16th position in the Final before being penalised.

Alex Irlando made an excellent start to the meeting by taking 4th in Timed Practice, 3rd at the end of the heats and 2nd in his Prefinal. The start of the Final was not favourable for him and he had to settle for 12th position at the finish, but his overall performance was enough to enter the top five of the Euro Series. Marijn Kremers kept on climbing from his 16th in Qualifying. Back to 5th in his Prefinal, he was still gaining ground in the Final with an interesting 7th place. The best performance came from Riccardo Longhi on his first international event of the season. After 5th in the heats, he won his Prefinal with the fastest lap in the race. Riccardo then fought in the top five of a very competitive Final and eventually finishing 3rd in the WSK Euro Series standings.

The young Leonardo Marseglia confirmed his progress in his first year in KZ2. He finished 15th in the Final despite a difficult start to the race. French Champion of 2017 and 7th in the European Championship in 2018, Pierre Loubère contested his first race with the Birel ART team. Increasingly confident in his kart, he finished 21st.