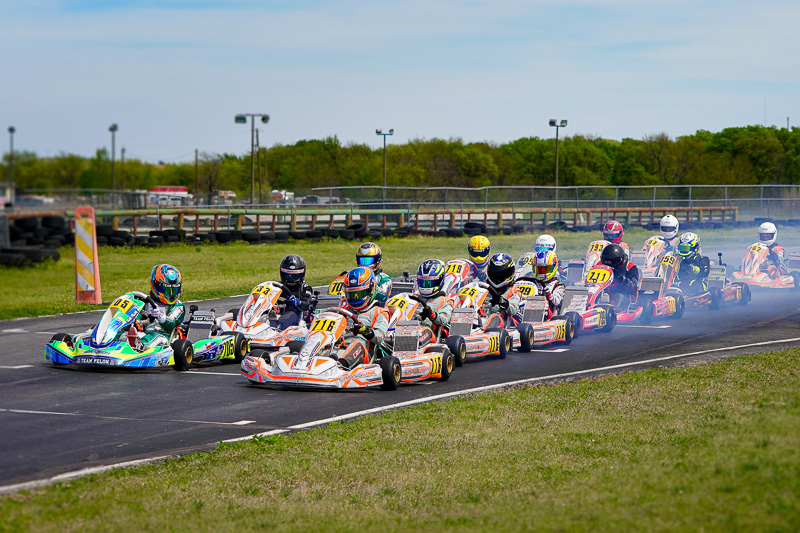 After an exciting day of competition at North Texas Kartway for the opening round of the Texas ProKart Challenge, the teams and drivers returned to the iconic facility in Denton to cap the weekend doubleheader on Sunday. The cold snap that has hit the region made for extremely cool morning warm-up temps, with the mercury holding below 40 degrees. Thankfully, the sun was out and it eventually warmed up to the mid-50s. The top drivers from Saturday’s action returned and didn’t appear to miss a beat, as Kaden Gray, Adrian Cruz and Miguel Mier completed their respective class sweeps in the X30 categories. 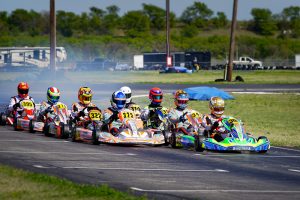 Gray was impressive all weekend long in his FA chassis, sweeping all six sessions to take the X30 Senior point lead heading to Amarillo in July. Gray was three tenths quicker than Crosslink Competition teammates Reilly Cann (Exprit) and Dylan Towne (Exprit) in qualifying, and he then maintained a 1.5-second cushion on Towne in the Prefinal. Gray quickly extended a lead to begin the 30-lap final, and this fueled a wild battle for the final spots on the podium between Cann, Towne, Max Hewitt (CRG), Ethan Arndt (COMPKART) and reigning TPKC X30 champ Alejandro Jaramillo (Exprit). The fight came to a head just before the halfway point with contact amongst the pack put Hewitt on the sidelines. Jaramillo somehow found his way through the chaos to emerge in second, and he would hold that position to the finish over Cann. Arndt battled all race, facing off against all three Crosslink drivers to eventually finish fourth ahead of Towne.

As always, the X30 Junior drivers made things exciting, with back-and-forth battles throughout the field. After emerging from the fight to score the win on Saturday, Adrian Cruz (Exprit) was back up front on Sunday, riding on the momentum. Cruz edged his Crosslink Competition teammate Chase Gardner (Exprit) by a tenth in qualifying and then narrowly nipped Alex Stanfield (Exprit) in the Prefinal. Cruz had an easier time of it in the 30-lap final, pulling away to a comfortable margin early over another of his teammates, Saturday top qualifier Ryan Shehan (Exprit). Cruz didn’t bobble once and powered to a 2.666-second win over Shehan. Stanfield held his ground surrounded by Crosslink drivers, taking the final step on the podium ahead of Gardner and Dawson Svoboda (Exprit). 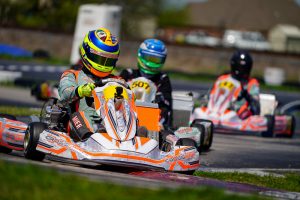 Austin Osborne (Kosmic) completed his dominance of the KA100 Senior class, sweeping all six sessions, capping off the event with a 23.709-second win on Sunday. As the point leader following Round 2, Osbourne won a free entry to the new KA-LO Cup event at the Circuit of the Americas in June. Andy Miller (TonyKart) finished second ahead of Josiah Tracy (BirelART). Brayden Robertson (Intrepid) score the win in KA100 Junior after Alex Stanfield retired early.

In the Micro Swift and Mini Swift class, weekend sweeps were completed by Ethan Thomason (Exprit) and Davis Cunningham (BirelART). Thomason topped James Moss (BirelART) and Bobby Klein (CRG) in Micro, while Cunningham and his Speedsportz Racing Park teammate Joseph Moss (BirelART) were the top dogs in Mini Swift. The battle behind the two BirelART drivers was fun to watch, with Helio Meza (Fullerton) emerging from a scrap with Miles Hewitt (CRG) to take the final step on the podium. 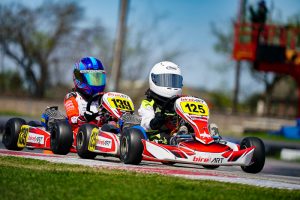 In the shifter race group, Skyler Sutton (Intrepid) was again the solid entry in S1, while Miguel Garcia (SodiKart) was solo in S4, as well.

The arrival of Dallas local Jeff Dolian on Sunday added competition to the 206 Senior class. Dolian was not able to attend the event on Saturday, but he was immediately in the hunt with his new 2019 Margay Brava 206, qualifying third behind Saturday runner-up Royce Johnson (FA) and Brian Van Cleve (IONIC Edge). Golian went to the front early in the Prefinal and did the same in the main, as the rest of the pack battled behind him. 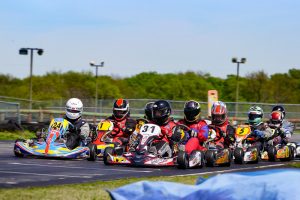 The Margay driver walked away to a 5.194-second victory over Johnson, who now leads the points after two rounds and, like Osborne in KA100 Senior, won a free entry to the KA-LO Cup event at COTA Karting. Richard Fogarty (TonyKart) diagnosed a motor issue after the Prefinal and once remedied, he was on the charge for the tail of the field and took third, turning the fastest lap of the race in the process.

For 2019, the Texas ProKart Challenge is a six-race, three-weekend series and the next event on the schedule will take the teams to West Texas and the popular Amarillo Kart Circuit on July 19-21.