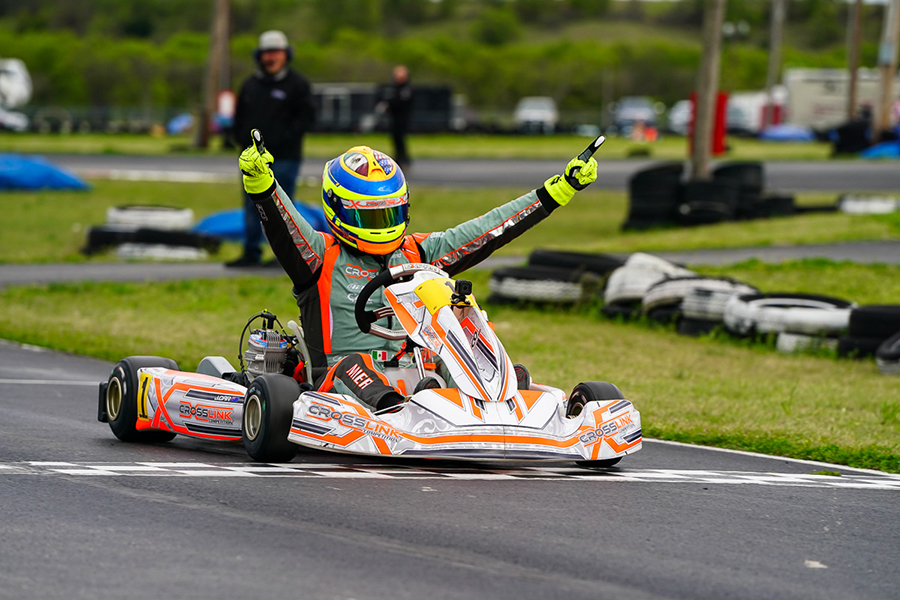 Crosslink Competition's Miguel Mier scored the win in the X30 Master class in Round 1 of the 2019 Texas ProKart Challenge at Denton
(Photo: Ken Johnson)

Cool temperatures, overcast skies and high winds tested everyone in the Texas ProKart Challenge paddock at North Texas Kartway for the series’ opening round on Saturday. That said, the conditions were the same for everyone, setting the stage for some incredibly good racing. The TPKC fields are a little light this weekend, most likely due to the crazy amount of racing that’s already been completed during the first quarter of the year, but the racing was extremely good, as it traditionally is at the iconic Denton facility. 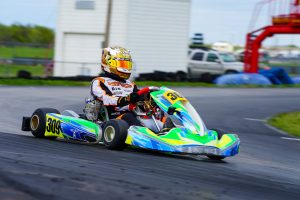 The headline X30 Senior category was all Kaden Gray for the opening round of the TPKC. Gray is running a TonyKart this year and he dominated the proceedings, winning by over five seconds in the 30-lap final. Crosslink Competition teammates Alejandro Jaramillo (Exprit) and Dylan Towne (Exprit) fought it out for the final podium positions, and it was Jaramillo who eventually took full control of the runner-up spot with a lap 20 pass. CRG Nordam’s Max Hewitt (CRG) was fourth ahead of Ethan Arndt (COMPKART).

Crosslink Competition drivers turned in a strong group performance in the X30 Junior class during the first day of racing, as well. Ryan Shehan qualified on the pole and then stormed to the Prefinal win, leading a group of four Crosslink Exprit karts. In the final, Shehan led early but Adrian Cruz eventually got past to assume the lead. Over the final laps, Cruz closed quickly on a pack of lapped karts ahead of him and, on the final lap, two drivers got together and spun right in front of the leader in the double left-hand turn 6-7 complex, forcing Cruz to take evasive maneuvers. 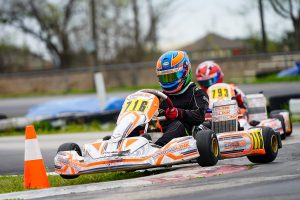 Adrian Cruz emerged as the X30 Junior race winner on Saturday, taking the lead after the halfway point to score the win
(Photo: Ken Johnson)

Shehan closed aggressively as Cruz was held up, and while he looked poised to steal back the lead, Ryan wasn’t able to complete the pass. Cruz held on for the win, while Shehan was second. Alex Stanfield (TonyKart) took the final step of the podium in third. Crosslink drivers Dawson Svoboda and Chase Gardner completed the top-five.

Reigning Texas PKC X30 Master champion Miguel Mier (Exprit) was again on top of the box at the end of the day. CRG Nordam driver Rod Clinard (CRG) has moved over to the class from his regular shifter program due to the lack of TPKC gearbox entries, and the veteran stole the pole in qualifying on the final lap. Clinard then stormed to the Prefinal win, but he was chased aggressively by Mier. In the final, Clinard led from the green flag but Mier attacked immediately in turn 8, taking over the lead. From there, Mier pulled away to a 2.757-second win over Clinard and Ross Smith (TonyKart). It was Smith who kept pushing on Clinard, but the veteran would not crack. Wilmer Valenin (CRG) finished fourth ahead of Thane Morgan (Exprit) in fifth. 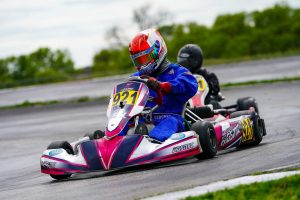 The shifter category that was once the core component of the Texas PKC has faded from its past position due to the national uncertainty with the class, and only three drivers were on the grid in Denton. Skyler Sutton (Intrepid) was the lone driver in S1, while Miguel Garcia (SodiKart) out-distanced Allan Page (CRG) in S4. 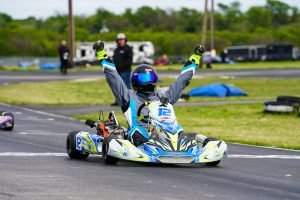 RJ Guajardo took the 206 Senior win on Saturday, coming out on top of a non-stop Briggs battle
(Photo: Ken Johnson)

The Briggs 206 Senior category has been added to the Texas PKC program for the 2019 season and the racing up front featured drivers swapping positions back and forth. Brian Van Cleve (IONIC Edge) qualified on pole, but he suffered a broken motor mount in the Prefinal and dropped a chain in the Final after catching the top-three with seven laps to go. Van Cleve was the fastest driver on the track and will be in the hunt on Sunday. In his absence, R.J. Guajardo (COMPKART) lined up with Royce Johnson (FA) and Richard Fogarty for the win. Guajardo eventually took control of the point and scored a 0.430-second win over Johnson. Fogerty capped the podium, while Tyson Knight (Intrepid) and Scott Cherry (DR Kart). 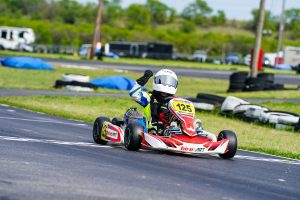 Speedsportz driver Davis Cunningham (BirelART) dominated the day in Mini Swift, sweeping all three sessions, as he and his teammate Joseph Moss (BireART) finished 1-2 in the 25-lap main. The duo ran away quickly, leaving the rest of the field to battle for the final positions in the top-five. Ashlyn Speed (Energy) ran a great race to move from seventh to third but ran afoul in post-race tech, advancing Mile Hewitt (CRG) onto the podium. Cameron Steller (Energy) and Helio Meza (Fullerton) completed the top-five.

In Micro Swift, Ethan Thomason (Exprit) took the victory and was joined on the podium by Bobby Klein (CRG) and James Moss (BirelART).

The drivers will all return to North Texas Kartway on Sunday for the second round of the series. EKN Trackside Live coverage, presented by Margay Racing, Franklin Motorsports and Briggs & Stratton Racing will be available on www.ekartingnews.com/live beginning at 9:00 am CT.