It has been 88 days since the 2018 WKA Daytona KartWeek completed back in December, kicking off the 2019 WKA Manufacturers Cup Series program. The first three months of 2019 have been non stop for the sport, but for many, it has been a long wait to return trackside. The wait is no more as the BBS Race Engine Development Nationals is set for the GoPro Motorplex on March 29-31 for Round Three and Four of the 2019 championship program. 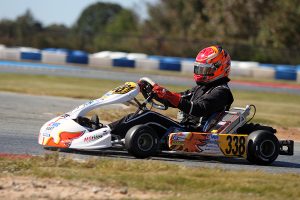 The event this weekend is the lone race at the Mooresville, North Carolina facility, having hosted two events in 2018. The 7/10-mile, 11-turn circuit is a replica of the famed Kartdromo Parma course in Italy, which hosted five world championships. The GoPro facility is among the top-rated in North America, enjoying one of the most successful local karting series and introducing a number of new karters to the sport. This weekend has surpassed the 100-entry mark on the weekend for the eight categories competing. Rain has played a role in the last two events for WKA in Mooresville, and could be a factor on the weekend as the championship chases resume.

The EKN Trackside Live coverage will be available at www.ekartingnews.com/live. Those not in attendance can listen to the race call while viewing the live timing as the event unfolds. The EKN Live program is possible thanks to our broadcast partners J3 Competition, Croc Promotion USA, and the Alan Rudolph Racing Academy. Be sure to follow the updates through the EKN Social Media pages during the weekend.

The driver to start out the season on top with a victory in the IAME Senior division was Brandon Jarsocrak. The KartSport North America/Kart Republic driver claimed victory at the opening round in Daytona, and is entering with a win at both GoPro events in 2018. Jarsocrak holds an 80-point advantage over last year’s IAME Junior champion Josh Green (MDR / Kosmic), who grabbed his first top-five finish in Daytona on Day Two. Former champion Brandon Lemke (Franklin / Merlin) placed fifth on Day One, and sits third in the standings with Jake Venberg (Franklin / Kosmic) trailing in fourth. 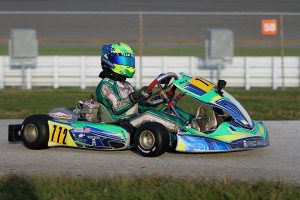 KA100 Senior point leader Alexander Kardashian (AMK / Top Kart) will not be in attendance in Mooresville, relinquishing the top spot. Former WKA champion Dakota Pesek (Top Kart USA) takes over the point lead heading into the weekend, having just one win in the category after eight starts in the category, including 2018 and 2019. Arie Venberg (Franklin / Kosmic) sits second, 50 points back, to set the stage moving forward in the title chase. Emory Lyda struggled in Daytona for his Nitro Kart debut, looking to bounce back at his home track. He joins a number of local drivers that will contend for the podium positions on the weekend.

One of the hottest drivers in the country is Connor Zilisch, who leads the IAME Junior championship heading into Round Three and Four. Zilisch (LAK / Tony Kart) started off the 2019 season with double win weekend at Daytona KartWeek, securing the early lead in the title chase. Fellow Junior rookie Brent Crews (Kart Republic) is second, looking for his first win at the Junior ranks after four months. Chloe Chambers (MDR / Kosmic) has been impressive during the winter programs, and sits next in line in the standings. Veteran Junior driver Connor Ferris (TFR / Kart Republic) seeks to rebound after a difficult Daytona to put himself into the championship chase. The rest of the field features a number of rookie Junior drivers.

Zilisch won three times in Daytona, grabbing a win in the KA100 Junior division to help him lead the championship chase in this category as well. Dylan Christie (MDR / Kosmic) and Tyler Wettengel (FA Kart) are the next two drivers in the standings entered to compete on the weekend. A good percentage of the field are doing double duty, bouncing back and forth between KA100 and IAME X30. 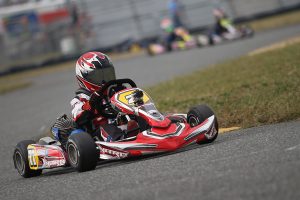 In Daytona, Christian Miles (Kart Republic) dominated the Daytona KartWeek by sweeping the Mini Swift category, earning Driver of the Month for January. His schedule has him not competing in Mooresville, along with a number of front runners from the December event. Local drivers standout among those entered in the class, including former series champion Caleb Gafrarar (Birel ART). Miles Murray (Nitro Kart), Gavan Boschele (Nitro Kart) and Danny Dyszelski (Kart Republic) are also among the locals. California driver Logan Toke (Top Kart) is making the long trek east for his series debut.

The largest category going into the weekend is the Micro Swift division, nearly at 20 drivers. Two drivers split the wins in Daytona with Spencer Conrad (Nitro Kart) and Aryton Grim (Nitro Kart) earning the top step of the podium each day. Conrad holds the advantage in the title chase over Grim by 40 points, with the top four separated by 125 points including Ayden Patty (Nitro Kart) and Nash Gierke (Kart Republic).

The Kid Kart division remains strong in numbers, with both winners from Daytona set to battle again in Mooresville. Jacob Schaible (Emmick) and Holden Harder (Emmick) each won during Daytona KartWeek, with Schaible holding the advantage in the point standings by 30 points. Podium finishers Kolton Sherwood (Nitro Kart) and JJ O’Neil (Praga) are among those looking to grab wins of their own at GoPro.