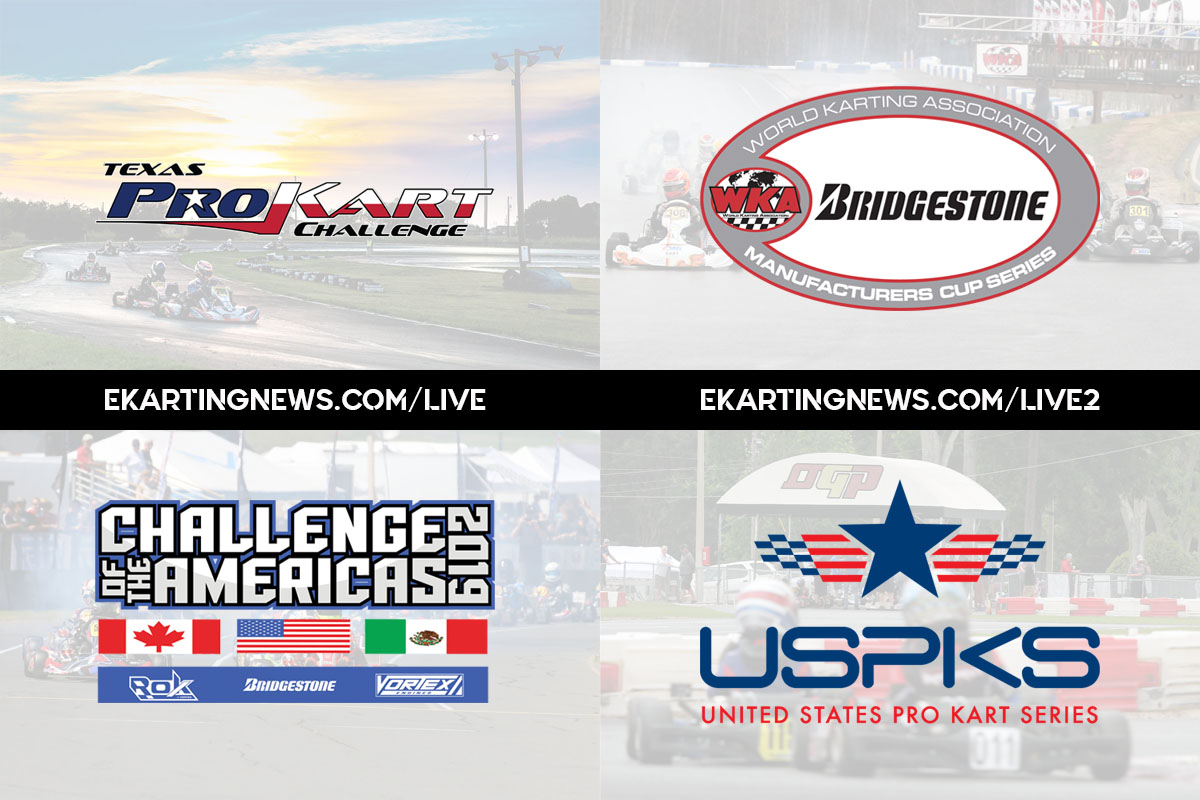 Every year, as the new racing schedules start landing in our email inboxes at EKN, David Cole and I begin assembling both our personal travel schedules and our plans for the coming year’s EKN Trackside Live Tour. More than any other season, this year’s schedule was hit with date conflicts, which we knew would make things interesting.  The first conflict occurred earlier this year in February when both the SKUSA Winter Series finale and Challenge of the Americas opener were scheduled on the February 8-10 weekend.  This presented a challenge but we rolled with the punches, growing our program and presenting live coverage packages for both events.  David and I will be back at it over the next two weekends for what we’re laughingly referring to as the #DualWeekendDoubleDouble.

This coming weekend, I will be flying to Dallas and then driving an hour north to Denton for the opening round of the SKUSA Texas ProKart Challenge at North Texas Kartways.  David will also head south, jetting into Charlotte before driving to Mooresville for the second round of the WKA Manufacturers Cup Series at GoPro Motorplex.

We joke that we’re producing four EKN broadcasts for the site and our readers / listeners, and we actually won’t be back at a track together until the SKUSA Pro Tour SpringNationals in May. After this weekend’s trips to Denton and Mooresville, we’re both home for just two days to unpack and re-pack, before heading out once again.  I’m flying west to San Francisco and then up to Sonoma for Challenge of the Americas finale at the Simraceway Performance Karting Center. David will stay on the East Coast, this time heading to Florida for the opening round of the United States Pro Kart Series at Ocala Gran Prix.

This weekend, I’ll be on the mic in Texas and Eric Brennan will handle the call with David in Mooresville.  In Sonoma, the weekend following (April 5-7), I’ll actually be managing the EKN Live broadcast and the race coverage as Tim “Chappy’ Chapman will call the action.  I’m sure I’ll hop on the spare mic to have some fun with Chappy, but I’m actually going to take the opportunity to suit up and will be running in the 100cc Masters class on a ROK VLR-powered Birel ART with the guys from Full Throttle Karting.  David will manage the EKN Live broadcast and will reunited with Tim Koyen, the voice of the USPKS in Ocala.

To manage this dual race coverage, we added a second channel to the EKN Live line-up on eKartingNews.com.  From the ‘Live’ dropdown menu on the EKN homepage navigation menu, you can select either ‘EKN Live 1’ or ‘EKN Live 2’.  We’ll be streaming live audio and live timing from the Texas ProKart Challenge opener on ‘EKN Live 1’ and from the WKA Manufacturers Cup race on ‘EKN Live 2’.  Here are the quick links to each page:

As always, we ask EKN Nation to help extend the reach of our EKN Trackside Live program by sharing the links on social media as you tune in throughout the weekend.  The more that the links and our content his shared, the more exposure we’ll build for our sport.

The season is no doubt heating up and as we wrap up the winter series and kickstart the season openers, we hope that you enjoy all our EKN Trackside Live coverage over the next couple of weeks.