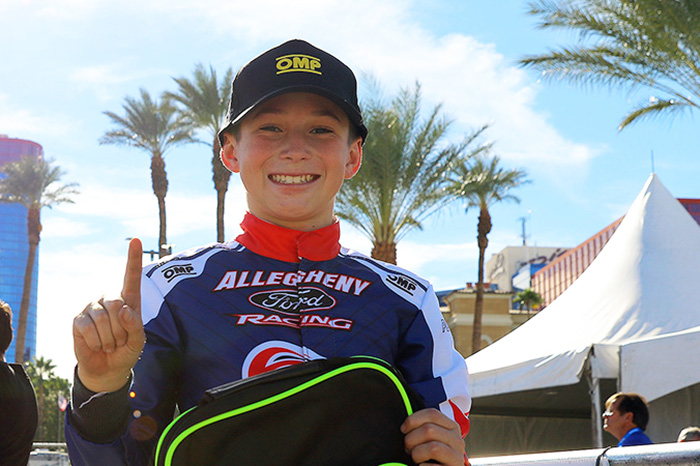 With multiple local, regional and national race wins to his credit, American karting standout and longtime World Karting Association member Luca Mars will now go for gold on the international karting scene. Representing the United States at the 2019 FIA Karting Academy Trophy, the junior standout will enter a series in which has groomed champions and superstars in the world of motorsports.

“The name Luca Mars is synonymous with winning,” expressed Kevin Williams, President of the World Karting Association. “He has been exciting to watch drive on the track, and a pleasure to deal with off of it. Out of all the competitors that put their name in to represent the United States this year, he was a clear favorite.”

The FIA Karting Academy Trophy is entering its tenth season and has a former driver that has made it to the top of the motorsports world. As a former FIA Karting Academy Trophy Champion, Charles Leclerc has progressed through the FIA ranks, claiming multiple championships along the way, and has now reached the pinnacle of worldwide motorsports as a Scuderia Ferrari driver in the Formula One World Championship.

“I am proud to represent my country in this unique international event,” added Luca Mars, the longtime World Karting Association member. “It’s a once in a lifetime experience and I can’t wait.”

“It is amazing to see the talent that has gone through the FIA Karting Academy Trophy,” explained Mike Speed, Owner of Speed Concepts Racing, the team Luca competes with in the United States. “Luca is a real talent behind the wheel, and he can get the best out of his equipment. He has been a valuable asset to the Speed Concepts Racing program, and I am confident that he will be at the front of the field in Europe.”

The FIA Karting Academy Trophy is unique in that it offers a level playing field with the same brand of chassis given to each racer and an engine draw program. The CIK-FIA concept hopes that some drivers will be able to set themselves apart in an equal and competitive environment.

Racing events this year for the FIA Karting Academy Trophy will be held in May in Germany before travelling to Italy in June, and again in September.

About World Karting Association: The World Karting Association has been a non-profit, Membership Organization since 1971, and has provided venues for members to enjoy all aspects of Karting in the USA, from its office in Concord, NC, including the famous Daytona Kartweek.  Providing Regulations, Instruction and Certifications, Racing Series, Insurance, and Venues for fair and safe Karting on all levels, WKA has a place for everyone in Karting.   For more information, contact WKA at info@worldkarting.com or www.worldkarting.com.